The Swiss Family Treehouse is one of the original attractions from when the Walt Disney World Resort opened on October 1st, 1971. As you might expect, a 50-year-old attraction based on a 60-plus-year-old movie does not merit lines as long as its Star Wars/Marvel/Toy Story counterparts. In fact, I walked through the Treehouse in 2011 and then didn't visit it again until this past June, when a conversation about the Colts QB history magically appeared.

As I walked through the mini arboretum I remembered meeting an Indianapolis Colts fan there back in 2011. Immediately I thought about how weird our conversation was to look back on. The Colts were missing superstar quarterback Peyton Manning and were headed for the chance to select can't miss quarterback Andrew Luck with the No. 1 pick.

I asked the Colts fan what he wanted and felt immediate sympathy as he struggled with his response to a stranger. He initially said he wanted the team to keep Manning, a player who had won four MVPs and one Super Bowl with Indianapolis. Then clearer heads prevailed, and he admitted drafting Luck made more sense. 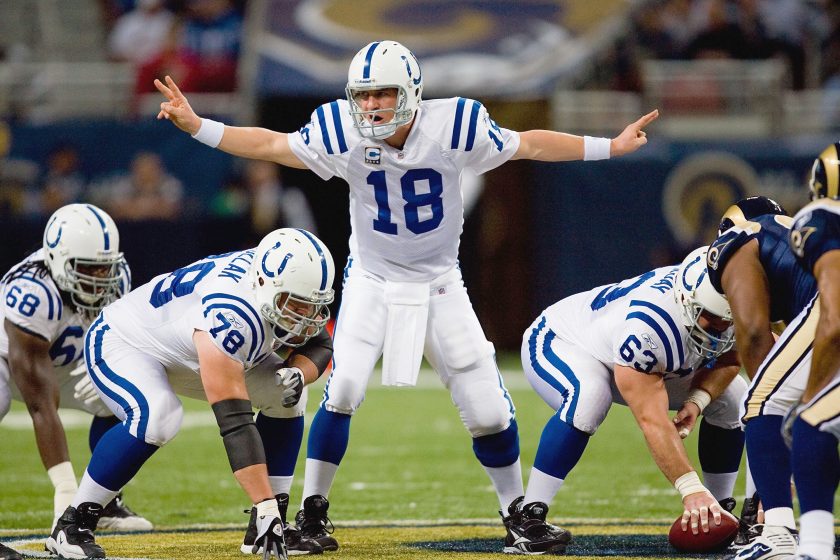 The Colts have an illustrious history of legendary quarterbacks, dating back to their days in Baltimore. Pro Football Hall of Fame icon Johnny Unitas captained the ship in the early days, with others like Jim Harbaugh, Jeff George and Mike Pagel taking the reigns after the move to Indianapolis. But, the Colts quarterback to truly break through and put Indianapolis on the map, battling Pro Bowlers like now-Buccaneers QB Tom Brady, Green Bay Packers legend Aaron Rodgers, as well as others in the AFC South, was Peyton Manning.

The Irsay family may have made some questionable decisions in their time, but drafting Peyton Manning is not one of them. The man with the 14th highest passer rating of all-time (96.5), kept the Colts in the AFC playoff picture, battling the Pittsburgh Steelers, New York Jets, Baltimore Ravens, Miami Dolphins, Tennessee Titans and Cleveland Browns, to name a few.

But after 13 years in Indy, four NFL MVPs and a Super Bowl win in 2006 over the Chicago Bears, Payton Manning was released, and Indy's star QB signed with the Denver Broncos. With Denver, Peyton would go on to defeat the Carolina Panthers in Super Bowl 50, winning his second ring and ending his career.

While losing a franchise icon like Colts QB Peyton Manning would hurt, the Colts seemed to be in the best possible scenario. Instead of a Matt Cassel year like the one the Dallas Cowboys had in 2015, the Colts opted to set themselves up with a high-end draft pick, ready to take over, something the Los Angeles Rams did with Jared Goff. All this to say, the present in 2011 was very dark for Indy, but the future seemed immensely bright.

But revisiting the Treehouse and this conversation in 2022 made me realize just how wacky the following decade was for the Colts and their quarterback position. Here's how it played out: 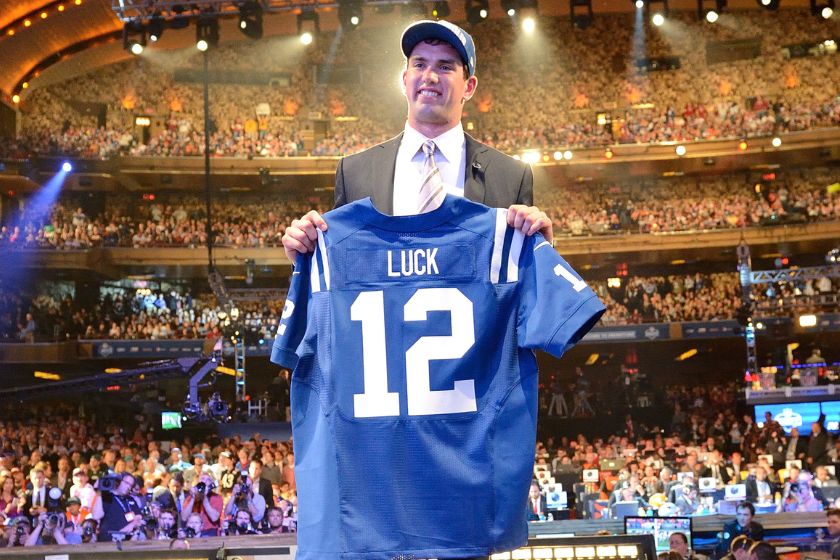 Luck had a very respectable rookie year for the Colts and his performance did little to diminish the optimism for how his career would go. The interceptions were higher than desired, and Luck lost the Rookie of the Year to Washington's Robert Griffin III, despite being the higher draft pick. Winning double-digit games in your first season was still nothing to be ashamed of and things looked up for Indianapolis. 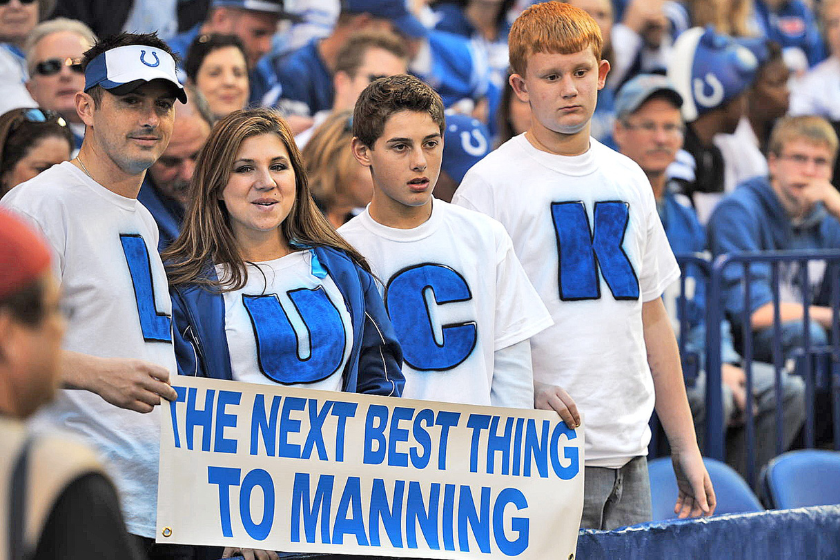 While Luck threw for fewer yards in his sophomore season, he cut his interceptions in half and brought up his completion percentage. The Colts won 11 games again giving Luck a 69% winning percentage in his first two seasons. Luck also won his first playoff game throwing 443 yards and four touchdowns in a 45-44 comeback win vs. the Kansas City Chiefs.

2014 - Luck & The Colts Reach the Precipice of Greatness 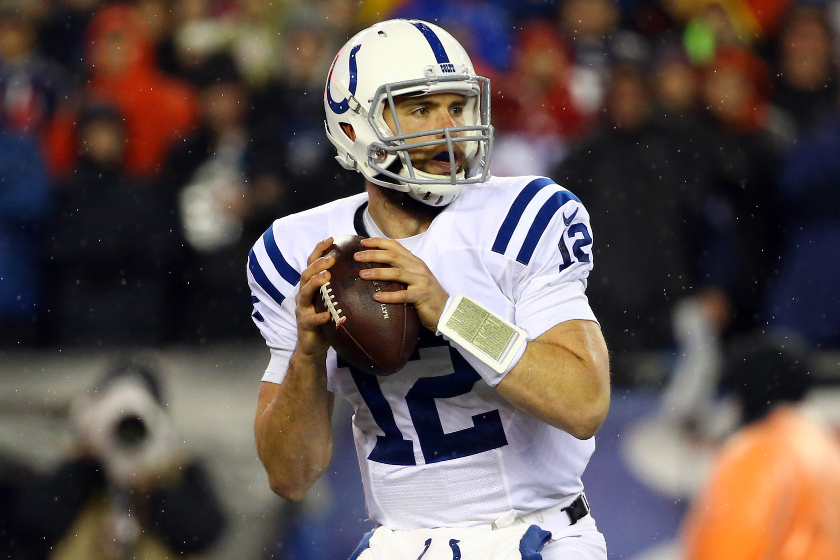 Another year, another 11 wins. It was like clockwork at this point for Luck and the Colts. Fans forgot about the future because the present was so bright that sunglasses were sold out in every Indianapolis mall.

Luck set career highs in yards, TDs and completion percentage. He also won two playoff games and took the Colts to the AFC Championship game (which they lost 45-7 vs. the New England Patriots). 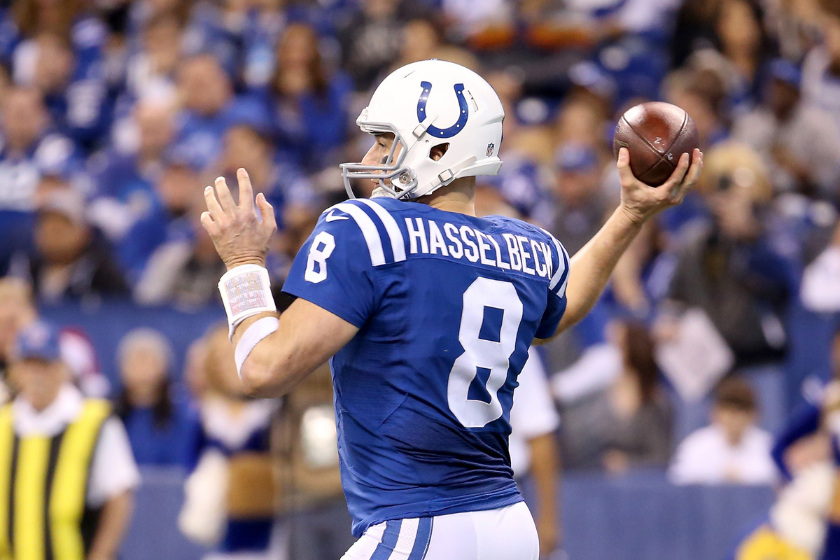 This is the season when the record scratches. Luck missed starts in Weeks 4 and 5 with a shoulder injury, before playing in Weeks 6-9. The Colts had a bye in Week 10 and announced Luck would miss the next few starts with kidney and abdominal injuries. He wouldn't play again that season.

Hasselbeck and Freeman filling in with a 6-3 record was likely a best-case scenario for the Colts. That type of good fortune with their backups would end there.

2016 - Luck Returns to a Mediocre Result 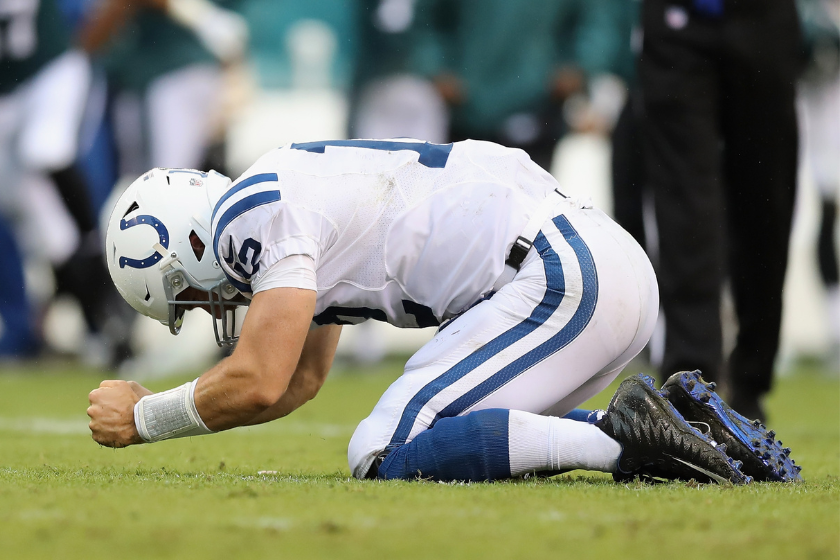 Luck would return in 2016 and play almost the full season (missing only Week 12 due to a concussion). He put up a great stat line, but the team finished with a .500 record for the second straight year. Luck's performance still provided hope for the Indy faithful that next season would be different. 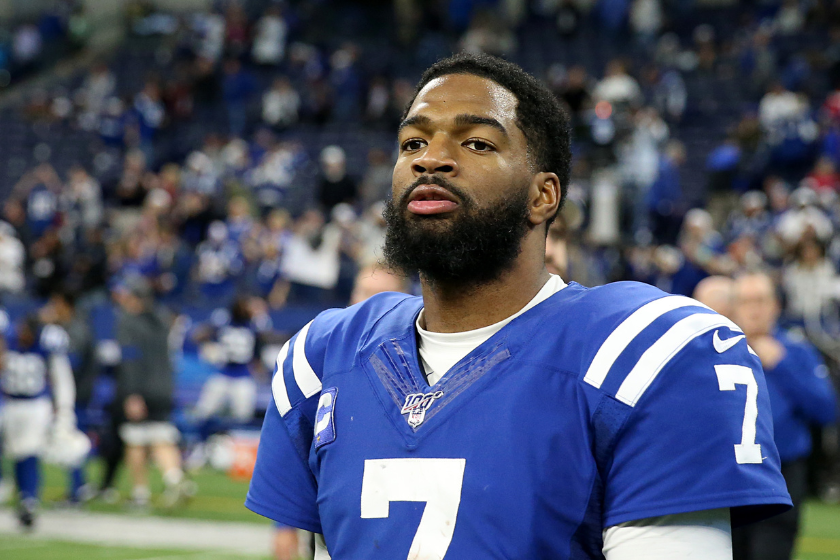 It wasn't. Things got much, much worse. Luck underwent offseason shoulder surgery and missed the entire 2017 season. The Colts were bad and new GM Chris Ballard's choice to roll with Jacoby Brissett didn't pan out, as the former Patriot's performance was what fan bases typically fear they'll see at quarterback when they lose a beloved player. 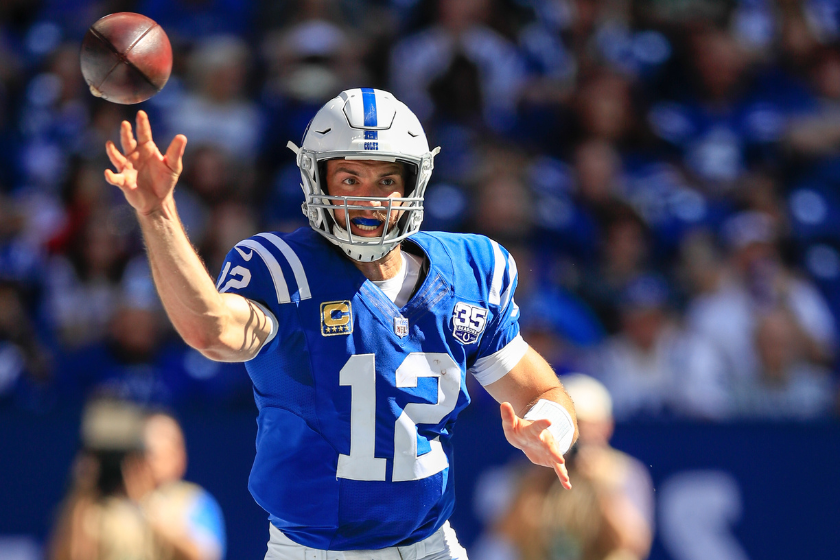 RELATED: Andrew Luck Walked Away From "$500 Million," But Still Retired With a Fortune

Things seemed to turn back around in 2018 for Indianapolis. Luck was back and put up a stat line quite similar to his best. He won Comeback Player of the Year and made his fourth Pro Bowl. The team also won double-digit games for the 4th time in Luck's six seasons as a Colt.

He won his fourth career playoff game vs. the Houston Texans 21-7 before the Colts' season ended in the second round after a 31-13 loss to the Chiefs. Sadly, this loss would be Luck's final NFL game as he announced his retirement in August 2019. 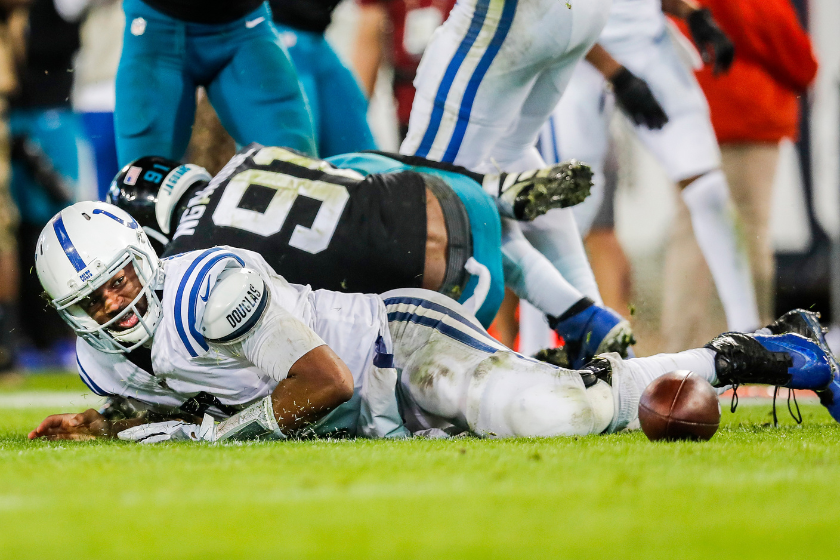 The Colts turned back to Brissett as their starter in 2019 as they tried to figure out what their plans would be at the most important position in sports. Brissett was pretty much as average as an NFL QB can be, which was only good enough for the Colts to finish just under .500 and miss the playoffs.

Indianapolis' record was not bad enough to warrant a top pick and the Colts missed out on drafting Joe Burrow, Justin Herbert or Tua Tagovailoa. The team needed to look at the veteran market for their next signal caller. 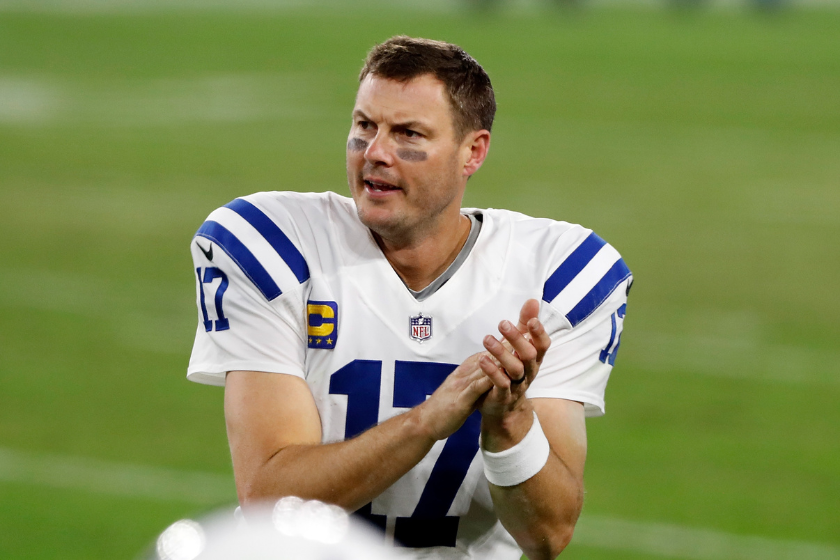 Before joining the Colts for his final season, Rivers had thrown for nearly 60,000 yards and 400 TDs. He'd won 123 games with the Chargers and made eight Pro Bowls. The Colts were hoping the team they had built just needed a steady hand at QB for success, and they were largely right.

Rivers had a perfectly fine season, especially for a 39-year-old not named Brady. The Colts won double-digit games and made the playoffs. However, the gamble of riding with an older quarterback is the need to find a new QB will always be right around the corner.

2021 - Even Without Luck, the Colts Still Gamble 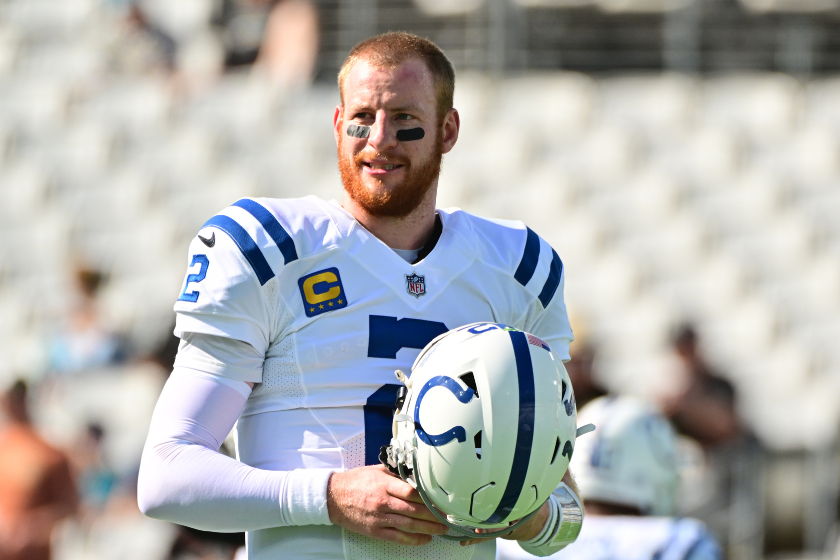 Rivers retired less than two weeks after the Colts' 2020 season ended. This put the Colts in the unenviable position of needing to replace him but also having a talented-enough team that warranted getting at least an above-average starter. This team couldn't start over with a rookie and five quarterbacks were taken before their first-round pick anyway.

And in their desperation, with a free agent acquisition out of the question, they turned to a passer the league couldn't quite understand.

Wentz was the No. 2 pick in the 2016 NFL Draft by the Philadelphia Eagles and was potentially heading towards being the MVP in 2017 before he tore his ACL in Week 14. From 2018-2020, Wentz was an under .500 quarterback who developed a penchant for throwing interceptions, even leading the league in 2020. Not the kind of ranking you want to be at the top of.

The Colts again were desperate for a quarterback who could help them make the playoffs, so they traded their 2021 3rd round pick and 2022 1st round pick for Wentz ahead of preseason training camp. His stat line looks like it should have been enough for a postseason berth and the Colts were 9-6 heading into the final two games of the regular season.

Indianapolis would lose both games to the Las Vegas Raiders and the Jacksonville Jaguars. The latter game was even more painful when you consider the Jaguars were the worst team in the league. Wentz's performance in these two games left a lot to be desired as he threw for only 166 yards per game and completed less than 60% of his passes.

What's even worse is that Wentz had weapons last year, namely running back Jonathan Taylor and wide receiver Michael Pittman Jr. Taylor specifically had an insane season on the ground and even received a 20-percent vote share for NFL AP Offensive Player of the Year behind Cooper Kupp.

The Road Ahead Is Still Uncertain for the Colts 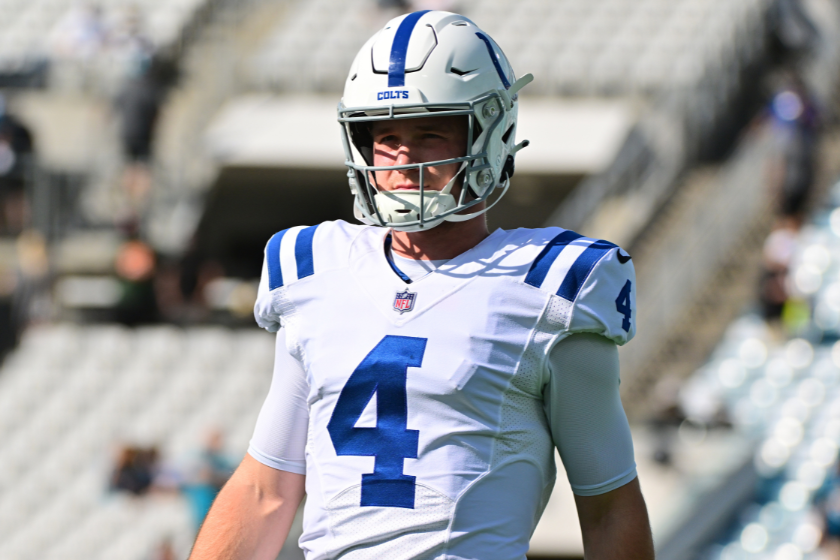 And that's how the post-Peyton decade has gone for the Indianapolis Colts. The passing of Hall of Fame legacies from Manning to Luck didn't come to fruition. What once seemed like a destined dynasty turned into one of the NFL's biggest "What Ifs" as Colt fans dream of a multi-verse with a healthy Luck.

Now head coach Frank Reich and the Colts head into a new era under Sam Ehlinger, who takes over for Matt Ryan, once again finding themselves in a weird limbo of not wanting to go full rebuild so they'll continue to mine the fields of past-prime quarterbacks. The big offseason move for Indy was trading a 2022 third-round pick for a former MVP with the Atlanta Falcons in the 37-year-old Ryan. Indianapolis also picked up Nick Foles in addition to Ehlinger, who they snagged in the sixth round of the 2021 NFL Draft.

But still, the acquisition of Ryan and Foles signalled another quick-fix solution as the Colts are still faced with the task of finding their starting quarterback of the future. A place no one thought they'd be in back in 2011 when the Manning-Luck decision was in front of them.

Is Ehlinger the answer? It remains to be seen, but for Colts fans begging for consistency under center, this personnel change signals more uncertain ground moving forward.

This article was originally published on July 22, 2022, and has been updated to reflect Sam Ehlinger's ascension to QB1 for the Colts.