T.J. Watt’s Girlfriend Was Teammates With His Brother’s Wife 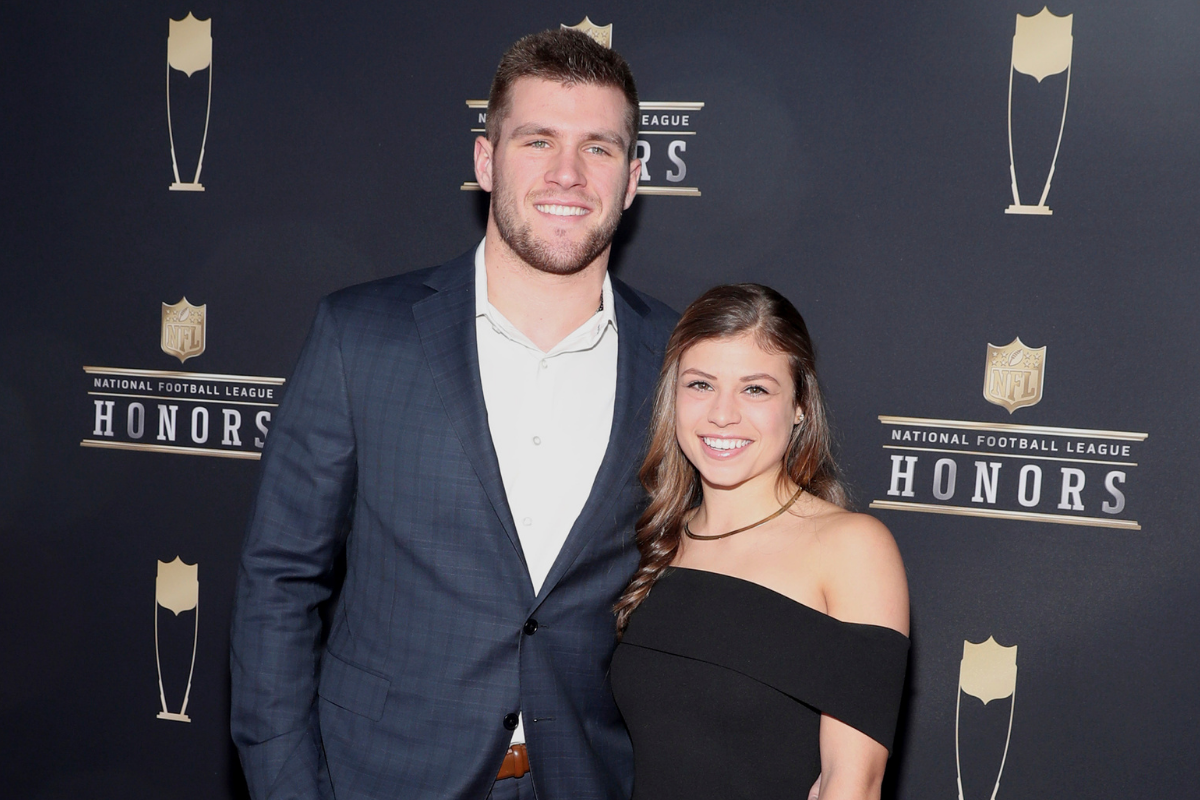 The Watt Family grows daily, both in size and quantity. Soon, they may displace the Mannings as America’s most dynastic American football family.

Headed by Connie and John Watt, this Wisconsin household is known for its three gridiron giant sons. J.J. Watt, a three-time NFL Defensive Player of the Year, is married to Kealia Watt. The middle Watt, Derek, married his significant other, Gabriella Watt. But the youngest Watt remains unmarried, leaving Grandma Watt to ask, “Watt’s the hold-up?”

T.J. Watt isn’t single, however. In fact, the 26-year-old is dating the one-time teammate of his brother’s wife.

T.J. Watt is a star American football player who plays linebacker for the Pittsburgh Steelers. The youngest Watt’s earned nominations for three Pro Bowls, two All-Pro Teams and NFL Defensive Player of the Year during his four-year career.

He’s one of three Watt Brothers in the National Football League. J.J. Watt, the former Houston Texans and newly Arizona Cardinals defensive end, is the oldest brother. Steelers fullback Derek Watt is the middle brother on the same team as T.J. Their parents are simultaneously proud and strapped for table space at Thanksgiving.

Trent Jordan “T.J.” Watt followed older brother J.J. in many ways. T.J. was a three-star tight-end recruit out of Pewaukee High School but switched to outside linebacker in college at the University of Wisconsin.

The edge rusher traded scoring touchdowns for stopping them, finding success on the Wisconsin Badgers’ defensive side of the ball in 2015. After one breakout performance against Michigan State, Watt was named Big Ten Player of the Week and Walter Camp National Defensive Player of the Week. Watt earned Sports Illustrated first-team All-American honors (second team in the Associated Press) as a junior in 2016.

After a loss to Penn State in the Big Ten Championship and a win over Western Michigan in the Cotton Bowl, Watt left college football behind, declaring for the 2017 NFL Draft.

On this day in 2017 the #Steelers drafted TJ Watt (@_TJWatt) from the University of Wisconsin pic.twitter.com/iRzMFBT1yx

With the 30th-overall pick of the first round of the NFL draft, the Pittsburgh Steelers selected outside linebacker T.J. Watt on ESPN. Critics weren’t sure if this third Watt shined with the same wattage as his older brothers. But T.J. has proven football fans from New York to Los Angeles he’s just as bright.

Watt made his first Pro Bowl during his second season and his first All-Pro team during his third. He’s been on both rosters ever since, usually alongside his brother J.J.

The eldest Watt has won three Defensive Player of the Year awards while the youngest has only been nominated. For fans in Steel City, it’s only a matter of time before the younger Watt wins DPOY.

Personal statistics aside, the Steelers have yet to record a losing season with T.J. at outside linebacker. They’ve made the playoffs twice, recording a first-round loss to the Jacksonville Jaguars in 2017 and the Cleveland Browns during the 2020 Wildcard round.

That’s great and all, but who is the woman who cheers for him at games?

Dani and Kealia were actually roommates as recently as September 2020, according to a Steelers.com article.

“It’s difficult for us to be there,” Rhodes said of missing her boyfriend’s football games. “I have only been able to go to about two games a year because of my college soccer career before this. I am used to being away from it. It doesn’t get any easier. I wish I could see T.J. play more often. I know he wishes the same. It’s definitely something I wish we could be at, but it will be cool to see it on television.

“You are excited to be there at games, but with soccer and being away, I am kind of glad no fans are allowed because I can’t go. I am staying with Kealia and we wouldn’t be able to go anyway because we are in season. It would have been cool though to see and be there in person.”

Danielle “Dani” Rhodes grew up in Waukesha, Wisconsin, a mere half an hour from T.J.’s birthplace. Dani played basketball and soccer at Waukesha West High School, a twenty-minute drive from Pewaukee High. The forward was named All-American and voted the Wisconsin Soccer Player of the Year in 2015. It should be no surprise that she met T.J. at the University of Wisconsin soon after when both Badgers were at the top of their game.

Though T.J. entered the NFL in 2017, Rhodes played college ball with the Badgers till her senior season in 2019. During her final year, Rhodes scored an impressive thirteen goals, earned All-Big Ten First Team honors, was named Big Ten Forward of the Year and was voted to the coach’s All-America team. She won these honors while her boyfriend was making his first All-Pro team with the Steelers. Now that’s a power couple.

Rhodes was not selected in the 2020 NWSL Draft. She did, albeit briefly, land a spot on the Chicago Red Stars roster alongside Kealia Watt and American vet Julie Ertz, another women’s soccer player with an NFL husband. Rhodes appeared in one 2020 match for the Red Stars as a substitute against the Washington Spirit during the NWSL Fall Series. Rhodes came on in the 86th minute and produced no goals. Her name was incorrectly recorded as “Demi Rhodes” by the record-keepers, and she hasn’t been heard from since.

Unheard from in professional women’s soccer that is. Though currently absent from the Red Stars first-team and reserves rosters, Rhodes is alive, well and quite active on social media.

Her Instagram and Twitter are booming considering she has nearly 40,000 followers on the former. It’s unclear where Dani’s future will take her, in career and love. The former Big Ten goalscorer has found making the jump to the pros difficult, but at least she has T.J. by her side.

It’s no wonder the Wisconsin kids found one another. They’ve lived similar lives since the beginning. The Watt family name is recognizable all over the world. With their new family football dynasty on the horizon, don’t expect this power couple to turn out the lights anytime soon.

MORE: J.J. Watt?s Net Worth Isn?t Bigger Than His Heart, But It?s Close