After an NFL star is named the Super Bowl's MVP, they usually head off to Disney World. After a big Little League win, coaches will often treat their entire team to ice cream. But where do you go after overcoming a 27-point deficit and completing the third-largest playoff comeback in NFL history? If you're Jacksonville Jaguars QB Trevor Lawrence, you go to Waffle House. 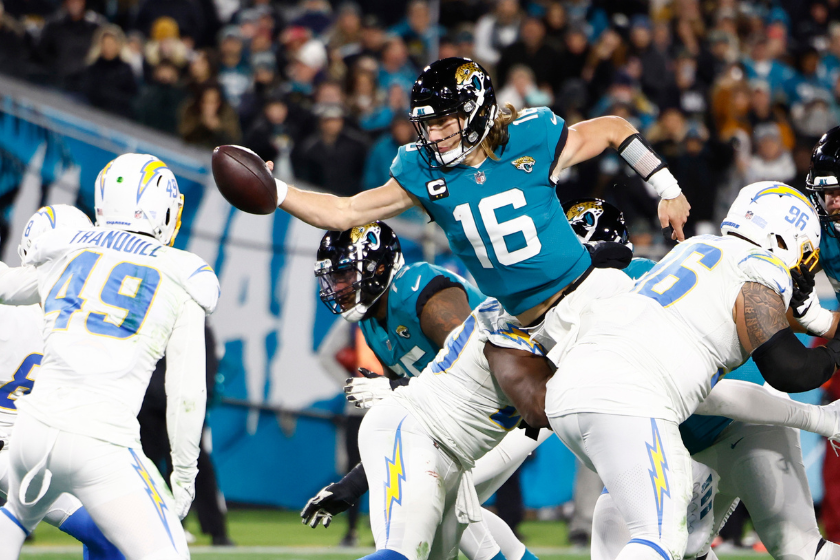 The Jaguars' first-overall pick in the 2021 NFL Draft had a lot on his plate during his Wild Card Weekend in 2023, and we're not talking about his post-game meal. Going up against the Los Angeles Chargers on Saturday, the Jacksonville Jaguars were not expected by many to pull out a win and advance to the divisional round. More and more NFL fans were joining that line of thinking as the two teams went to their locker rooms at halftime with the Chargers up 27-7.

When looking at his wild card round stat sheet, Lawrence's performance begins to look like a Waffle House menu, in that there's a little something for everyone. A two-point conversion stretch? You got it. Four touchdowns in one half? You betcha. And like the Waffle House staff, Lawrence was serving up touchdowns to any open target who wanted one. Lawrence was able to connect with four different JAX receivers for each of his four second-half touchdowns, as he threw for a total of 288 yards on 47 passing attempts. We're sure if he were allowed by head coach Doug Pederson to kick a field goal, he would have done that, too. Thankfully, Riley Patterson's aim was true, and his field goal sent the Jaguars into the NFL playoff history books and punched their ticket to face the Kansas City Chiefs.

All That Work Can Really Get You Hungry

After the postgame interviews were wrapped up and his equipment was hung up in his locker, Lawrence and his wife, Marissa, left TIAA Bank Stadium looking for some late-night grub. Waffle House, for those in the know, is like an oasis in the desert for midnight foragers. Lucky for the Lawrences, they found a location that didn't have a fight happening inside and then grabbed a table. According to the many onlookers that Saturday night posting videos on social media, Lawrence ordered the Texas Bacon Cheesesteak Melt Plate and a pecan waffle. That's an expert order; it's clear this wasn't his first time at Waffle House. Surely, Lawrence made several trips to the restaurant chain during his high school days in Georgia.

What did he have to drink? At this point, we have to assume the Jags QB washed everything down with a glass of sweet tea, but we may have to wait until his next big win to find out. Who knows? Perhaps Trevor's local Waffle House is the secret to the Jaguars' AFC playoff win.

The Jaguars were able to advance to the AFC divisional round, as were the Buffalo Bills and Cincinnati Bengals after they took down the Miami Dolphins and the Baltimore Ravens, respectively. The Jaguars are now the only Florida-based NFL team remaining in the playoffs after Tom Brady and the Bucs were bounced by the Dallas Cowboys on Monday night.

The Kansas City Chiefs will pose a serious challenge to the Jaguars, who have been trending upward since their losses to the New York Giants, Indianapolis Colts and Houston Texans. However, if Lawrence's celebratory meal is an indication, he's ready to face the Cowboys (Texas Bacon) or Philadelphia Eagles (Cheesesteak) in the Super Bowl.