Trevor Lawrence's NFL career so far has been drastically different than his time playing college football. As a freshman, he led Dabo Swinney's Clemson Tigers to a crushing win over Alabama in the 2019 College Football Playoff National Championship, and he's one of the few players who didn't play for Alabama who only experienced playoff games in the postseason. Yet, his career with the Jacksonville Jaguars got off to a rocky start no thanks to Urban Meyer's brief tenure and a plethora of interceptions. Nonetheless, Lawrence clearly has the talent to be a franchise quarterback.

Aside from being an incredibly gifted athlete and possessing a head of hair deserving of its own Head & Shoulders commercial, though, not much else is known about the star quarterback whose made a career out of throwing touchdowns.

The dirt one can dig up on Jacksonville's masterfully-maned wunderkind is a short list. He grew up a Tennessee Volunteers fan and aspired to be Peyton Manning. His golf game is absolutely terrible. He has a brother who looks just like he does. Judging from Trevor's Instagram, he relies heavily on his faith and his wife, Marissa Mowry.

You've probably seen Marissa in the stands cheering on her husband, as she became a trending topic during the 2019 national title game. Now, they are married. But who is the woman behind the NFL quarterback for the Jacksonville Jaguars?

Marissa Layne Mowry (who now goes by Marissa Layne Lawrence) was born in November 1999 in Cartersville, Georgia. She and Lawrence met each other in the eighth grade and dated on and off through their years at Cartersville High School.

Scroll through each of their Instagram feeds and you'll find their faces all over it. In December 2019, Lawrence took his date to the Clemson football formal and she posted photos from the evening. It's pretty clear she's not only a Clemson and Jaguars diehard but Lawrence's No. 1 fan.

RELATED: Trevor Lawrence's Hair is a Big Part of His Superstar Identity

While Mowry was a staple in the stands in Memorial Stadium, she didn't attend Clemson University.

Mowry was a public relations student at Anderson University, where she was also a soccer player. The private NCAA Division II university in Anderson, South Carolina, is just a short 30-minute drive from Clemson. You didn't think Mowry would stray too far from her dreamboat football player boyfriend, did you?

"I just felt at home when I was there. I love the team and the girls and it's an amazing program and school where I feel I can grow my walk with God," she said of her recruitment, according to Heavy.

They Broke Up Once in College 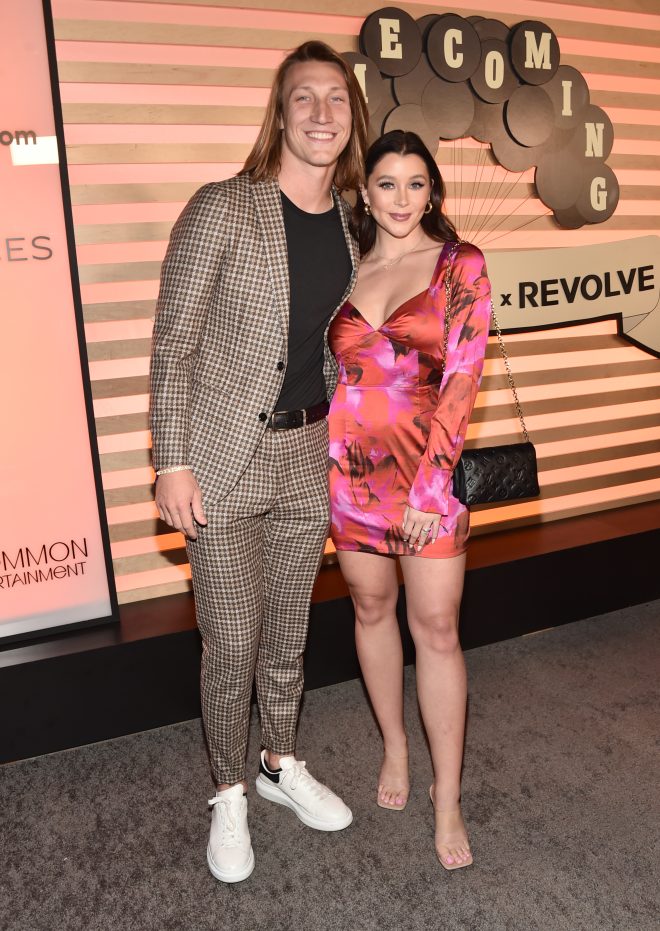 It hasn't always been smooth sailing for the picture-perfect couple.

Mowry told ESPN in 2019 that the two broke up for a month during their freshman year in college. It was a tough first few weeks in college for the former Clemson Tigers passer. He was fighting for a starting spot and stopped going to church like he used to.

But since then, the pair have been together every step of the way.

Marissa and Trevor's life changed forever when they exchanged vows, and she officially became Marissa Lawrence.

The couple tied the knot in early April 2021 at a private wedding with family and friends in attendance in Bluffton, South Carolina. They shared a glimpse into their special day (and Marissa's massive diamond ring) in a video posted to Instagram.

Funny enough, Jaguars fans pooled enough money together to buy the newlyweds a $300 toaster as a wedding gift.

NFL Network's Ian Rapoport reported that Lawrence skipped out on draft prospect in-person medical exams and physicals in Indianapolis to celebrate his love with Mowry.

Trevor Lawrence became the first overall pick in Cleveland's 2021 NFL Draft by the Jacksonville Jaguars shortly after his nuptials. He had a rocky rookie year due to being thrust into a toxic situation under Urban Meyer, but he's looking to bounce back under Doug Pederson.

Even if the No. 1 draft pick has a down game, he'll have his No. 1 fan by his side for the rest of his life.