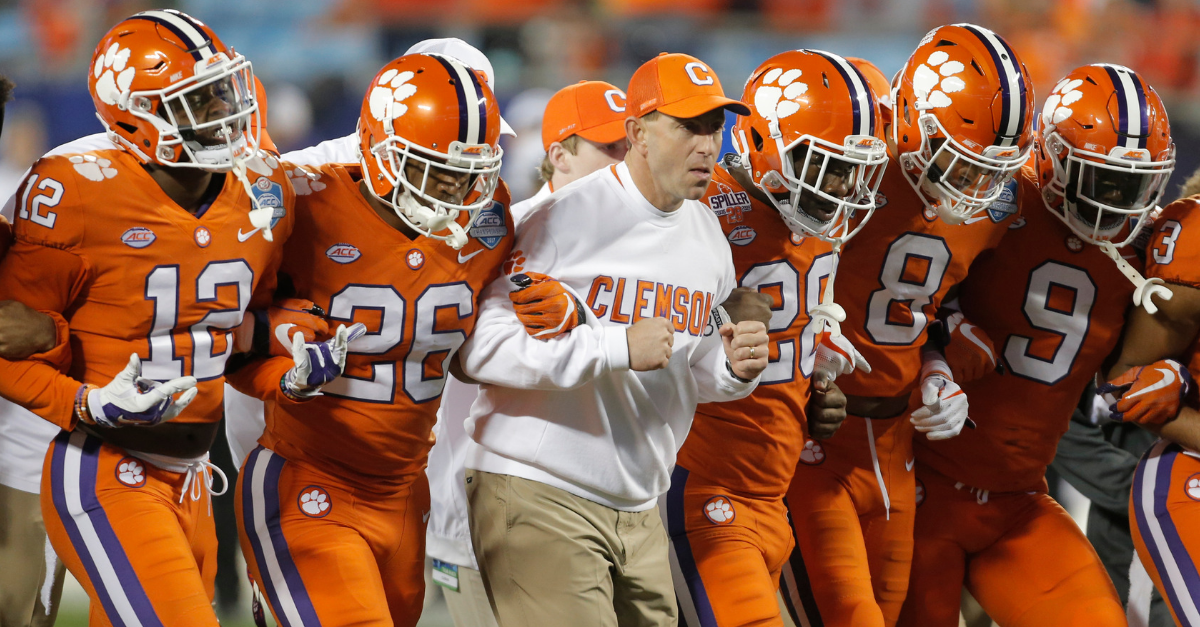 Since arriving in South Carolina back in 2003 as the football program’s wide receivers coach, Dabo Swinney blossomed into the unofficial president of Clemson University. (Sorry about it, James P. Clements.) The Clemson football team had won 10 or more games in four-straight seasons only once from 1987 to 1990. Under Dabo, the Clemson Tigers just finished their eighth-straight year with 10-plus wins, including the first 15-0 college football season since Penn did it way back in 1897.

If there was any thought that Dabo would jump ship for another school, all that’s been put to rest. On Friday, Clemson head coach Dabo Swinney agreed to a 10-year, $93 million contract with the university, according to USA Today. That deal is the richest contract for any coach in college football history by a mile.

The previous record-high was Alabama’s Nick Saban, who signed an eight-year, $74 million deal in 2018. Swinney will make $8.25 million in the first year of his deal, plus another $1 million for a split-dollar life insurance premium.

“I am grateful and humbled by the incredible commitment Clemson has made to me, my family and our football program,” Swinney said in a statement. “For more than a decade, we have given our all to provide this world-class university and our incredible fans the championship football program they deserve – to live up to Best is the Standard.”

Swinney took over from long-time coach Tommy Bowden halfway through the 2008 season, a promotion that netted him $800,000 a year. Now, Swinney is set to make between $8.25 and $10 million per year over the life of this deal until 2028.

Clemson’s won over 100 games in 11 seasons, has a 69-16 record dominating the ACC, has captured two College Football Playoff National Championships and five ACC titles under the 49-year-old from Birmingham, Alabama.

But the only three-time Paul “Bear” Bryant Award winner has a special clause in his contract just in case he decides to jump ship.

Swinney’s contract includes a standard buyout clause if he decides to leave. In the first two years of the deal, Swinney’s buyout would be $4 million. However, if he specifically leaves for the Alabama Crimson Tide ? where he played WR in the early 90s ? Swinney’s buyout actually INCREASES by 50 percent every single year. You can consider it “Anti-Alabama Insurance.”

Dabo Swinney’s new $93 million deal includes a “buyout enhancement” that increases his buyout 50% should he leave Clemson for #Alabama specifically.

The highest-paid football coach in the country is a Clemson Tiger, but he deserves every penny. Swinney churns out elite talent to the NFL Draft every year, but more importantly, he’s built a winning culture that his players and Clemson football staff have bought into.

Defensive coordinator Brent Venables agreed to a five-year, $11.6 million contract extension last season, then received another year tacked onto that on Friday. Combined with offensive coordinators Tony Elliott and Jeff Scott, this Clemson football staff is one of the highest-paid in the country.

“He has demonstrated the ability to consistently achieve at the highest level on and off the field, and he has done so with a commitment to integrity and core principles. This new agreement is evidence of Clemson’s steadfast commitment to Dabo and to our football program, and we are thrilled that he and his family will be a part of our community for years to come.”

With this new contract, don’t expect the richest college football coach in the country to simply rest. Swinney is coming off another national title season in 2018, and with quarterback Trevor Lawrence still with two seasons of eligibility remaining, there could be quite a few championship game appearances coming over the next few years.