New York Jets QB Zach Wilson isn't used to being the talk of the NFL, unless it's for underthrown balls and terrible interceptions.

After an underwhelming rookie season in which he threw more picks than touchdowns and won just three games as the starter in 13 games. And to add insult to injury, after a dismal game against the New England Patriots, the New York Jets quarterback was benched in favor of backup Mike White. But it was his off-the-field alleged passes had social media buzzing this past summer on an Aaron Rodgers level. The Jets signal caller appeared to split up with longtime girlfriend Abbey Gile, and the rumors surrounding both of them are something straight out of the "American Pie" movie franchise.

However, the rumors came and went and it appears Wilson has a new lady in his life.

#NFLDraft2021 1st-round pick Zach Wilson and his girlfriend Abbey are the new Ken & Barbie of the NFL pic.twitter.com/amBHVFv39h

RELATED: Trevor Lawrence & His Wife Marissa Are the NFL's Next "It Couple"

Wilson was dating his girlfriend Abbey Gile until sometime early this summer, it appears.

The pair had been dating since high school, where Zach was a football star at Corner Canyon High School in Draper, Utah. Abbey attended Brighton High School, some 20 minutes down the way.

Wilson wasn't the only athlete in the relationship, however. Gile was a professional dancer whose dance team won first place at the Utah State Class 5A in 2019.

"Happy Birthday to the most beautiful girl. I can't explain how much you mean to me. Through all the ups and downs, you've always been my side. Thank you for spoiling me! I love you to the moon and back!" he wrote on social media for her birthday in 2021.

However, once their relationship came to an end, some wild allegations of cheating came out.

Abbey Accused Him of Cheating With His Mom's Best Friend

it brings me no joy to report that??..

Zach Wilson has that dawg in him. pic.twitter.com/0bjqxj7cnz

This is where things get spicy.

Abbey reportedly posted to her Instagram account (she's since deleted her profile) confirming her new relationship to Wilson's former college teammate and current Washington Commanders wide receiver, Dax Milne, who posted pictures with her along with the cryptic caption, "Word on the street."

After someone on Instagram called Abbey a "homie hopper" for moving on to Wilson's former roommate, she reportedly wrote back that he "was sleeping with his mom's best friend ... that's the real homie hopper."

Zach Wilson, unsurprisingly, didn't comment or post anything about these reports. It's unclear who the "best friend" is, but we're going to need her to step forward and tell her side of the story. For reference, here's Wilson's mother:

And naturally, Twitter had way too much fun with these rumors.

Zach Wilson ?meeting the fans? after each Jets practice. pic.twitter.com/zHbvCBrmrp

Zach Wilson whenever a mom texts him pic.twitter.com/gQWifGzquY

As always, believe what you want of this.

Wilso appears to have moved on though, and it looks like his new girlfriend is 23-year-old New Jersey based influencer Nicolette Dellanno. The two haven't gone official, but Wilso made an appearance on Dellanno's Instagram and Jets fans commentedt asking about Wilson's health because he was dealing with a knee injury at the time. Never underestimate NFL fans and their connection to their quarterback.

The two also attended a New York Yankees game together. We'll keep an eye out to see if she attends more Jets games at MetLife Stadium.

Wilson's Football Career Before the NFL 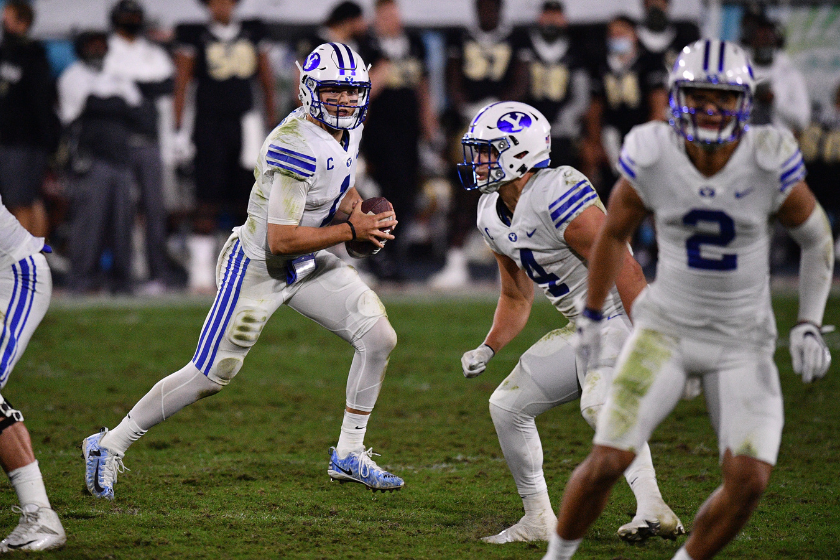 As stated above, Zach Wilson and his ex had been dating for quite some time. She went through thick and thin with him, undoubtedly.

Wilson grew up in Draper, Utah, to parents Mike Wilson and Lisa Wilson (nee Neeleman), along with his five siblings. Having grown up in Utah, the Wilson clan was hopeful young Zach would receive a scholarship from the University of Utah, where his father was a defensive tackle for the football team back in the day. They aren't the only football players in the family, either. Zach's brother is a future stud high school quarterback.

No offer from the Utes ever materialized due to prior commitments to quarterback Jack Tuttle. Wilson eventually received a scholarship to play for the BYU football team, but Wilson opted to commit to Boise State after feeling a lack of interest from former Cougars offensive coordinator Ty Detmer. It turned out Detmer, who was later relieved of his role, had a prior commitment to his own nephew.

It's only natural the Broncos, who had recruited Wilson heavily, were livid when the star quarterback flipped his commitment from BSU to BYU.

Per the Deseret News, Boise State coaches began contacting Eric Kjar -- the head coach of Corner Canyon High School's football team -- in search of answers. He had also been recruited by other schools such as California, Oregon State, Hawaii and Fresno State, among others.

Wilson followed through on his commitment to Brigham Young University and played three seasons in Provo while earning a degree in construction management.

Wilson threw 56 touchdowns to just 15 interceptions, and recorded more than 7,500 passing yards. He was also named MVP of the Idaho Potato Bowl after throwing four TDs in the game against Western Michigan.

After a strong junior season that saw him briefly leading the Heisman Trophy race, Wilson ended his NCAA career and declared for the NFL Draft.

Scouts were obsessed with his arm strength and accuracy, and he quickly surpassed Ohio State quarterback Justin Fields as the best quarterback in the class who isn't Clemson's Trevor Lawrence.

His time in New York has been brief and uneventful so far, but it appears to be on the way up as Robert Saleh has the Jets playing with confidence. As long as he can sort out his personal life, he may do the same on the football field, and possibly bring a Super Bowl to the Tri-State area. It's either that or play out the rest of his career with the Jaguars, Steelers, or Dolphins.

MORE: Tua Tagovailoa & His Wife Keep Their Lives as Private as Possible