"Block until the echo of the whistle," is a phrase many offensive lines have heard at one point or another in their time as a lineman.

Trevor Penning, the No. 19 overall selection for the New Orleans Saints from Northern Iowa in the 2022 NFL Draft, takes that saying to a new level. However, the left tackle seems to do more than just block until the echo of the whistle. He's showcasing his abilities as a multi-sport athlete as he waits for Dana White to elect him as the new challenger for the Heavyweight belt.

For the third day in a row--yes, third day in a row--Penning has been kicked out of New Orleans Saints training camp due to fighting teammates. The Saints have been a team that has a history of players fighting at training camp, but it seems to be a big deal when a player does it three days in a row. The frosting on the cake: Penning was a first-round pick, and he was selected over Quay Walker, Tyler Smith, Tyler Linderbaum, defensive end Jermaine Johnson and other top-tier offensive linemen.

This begs the question....

Did the Saints Waste Their First Pick on a Future UFC Superstar? 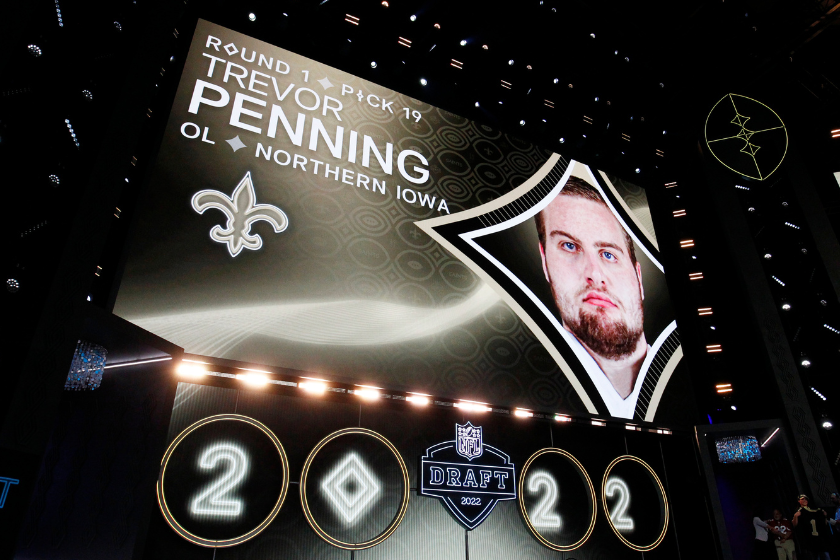 One of the main strikes against Penning heading into the draft was his overly physical play-style. Offensive linemen are supposed to be physical, but they're also supposed to be smart. Linemen, outside of defensive backs, get penalized easier than other positions, so playing smart is incredibly important, especially for those playing on the outside of the line.

#Saints rookie 1st round pick, OL Trevor Penning, has been kicked off OTAs on Wednesday after starting a fight at practice for 3 consecutive days.pic.twitter.com/ZYj5yMJcdg

After the third offense by the New Orleans Saints rookie, head coach Dennis Allen addressed the media about what happened.

"Yeah, we don't have time for that. We've got to learn as a team, how to compete, how to play, how to practice, and push ourselves to the limit, but yet, not take it over the edge."

Allen was pretty mild-tempered when speaking to the media, so there doesn't seem to be any animosity from the head coach to the rookie, but if he doesn't figure out how to play within the confines of the whistle, he could find himself hurting the team more than he helps.

His physicality is a positive until it starts costing the Saints 10-15 yards per play. Penalties are drive-killers, so the more Penning gets due to his physicality could be detrimental to the Saints' offense. Penning can't keep going after Malcolm Roach and others. What if he takes a swipe at wide receivers Chris Olave and Michael Thomas?

That said, was Trevor Penning a waste of a draft pick? Or is this just an example of the competitive nature within Trevor Penning? It should all play itself out this season and beyond.

It's also important not to overreact to something like this. Yes, three days in a row of being kicked out of practice is surely alarming, but it's also the beginning of August. Players will figure out what they need to work on for the upcoming season, and for Trevor Penning, the list is pretty simple: Stop getting into fights.

Because if this becomes a continuous pattern, the Saints will be very aggravated that they spent a first-round pick on a player that will spend more time suspended from games than on the field protecting Jameis Winston.

This is Allen's second time being a head coach -- his first time for the New Orleans Saints -- and while things have been looking good for the Saints, this is a glaring issue that needs to be stopped if the Saints want anything to do with playing late into this season.

They have the talent on the roster to do so, but self-inflicted penalties via Trevor Penning are certainly a way to put an end to that trajectory.