New Orleans Saints running back Alvin Kamara is somewhat of a Renaissance man. He doesn't limit his life to one lane. Kamara is more than just an elite football talent. He's a musician, an artist and a grill aficionado. I'm not talking about a George Foreman barbecue, either.

To understand Kamara's love for grills, I need to take you back to the 1970s. Two decades before Kamara was born, his life would be forever changed by a man named William Jonathan Drayton Jr., AKA Flavor Flav. Flav made oversized neck clocks and shiny teeth go mainstream 50 years ago. Grills are essentially denture diamonds and have been associated with hip-hop ever since.

Kamara may be a National Football League prodigy, but he's also a leader of the culture. The NFL player grew up rapping with this generation's OutKast, the Atlanta-based rap trio Migos. You're just as likely to see the rappers on ESPN shooting around with NBA players as you are to see them hanging out with their old pal Kamara. The running back sports long hair, multiple face piercings, and a shiny gold grill reminiscent of Lil Wayne or Lil Jon. But the diamonds Kamara rocks are more than just OKAY!...They're worth more than my entire life, and he wears them while playing football. 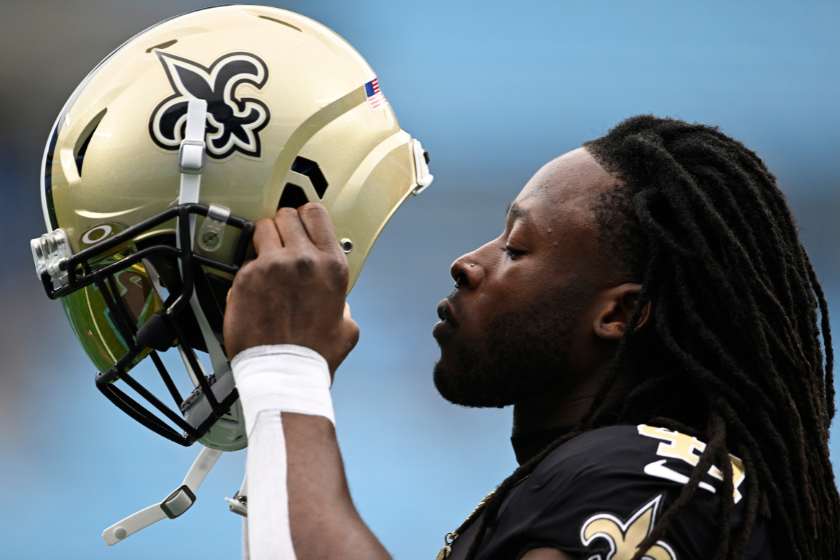 Alvin Kamara, above all else, is an eclectic human being. He just happens to play football.

Kamara grew up in Norcross, Georgia, north of Atlanta. He was best friends with three young men who grew up to become Migos -- Quavo, Offset, and Takeoff. The Migos and Kamara grew up under Alvin's influential uncle, Coach K (no relation to Mike Krzyzewski). The fact the Migos and Kamara are so successful today is a testament to Coach K's character.

Highly recruited out of Norcross High School, Kamara chose the Alabama Crimson Tide. His time in Tuscaloosa under Nick Saban (and backing up Derrick Henry) was short-lived, and Kamara sought a way out. He took his cleats to Hutchinson Community College in Kansas, where he scored ridiculous touchdowns during the 2014 season. His turnaround redirected Kamara toward the SEC and the Tennessee Volunteers.

Kamara ran an electric two seasons through Old Rocky Top before entering the 2017 NFL Draft. New Orleans selected the young running back with the 67th-overall pick -- the third pick of the third round. The fifth running back off the board behind names like Leonard Fournette and Christian McCaffrey. While the Jacksonville Jaguars and Carolina Panthers don't regret their draft choices, it's safe to say New Orleans is quite pleased with Kamara.

The pierced-up, blinged-out Kamara has taken New Orleans by storm on and off the field. He is beloved by his teammates, including Mark Ingram and now-retired Drew Brees, and head coach Sean Payton. In 2017 alone, Kamara was named the AP Offensive Rookie of the Year, made his first Pro Bowl and won the New Orleans Saints Rookie Costume Contest.

During his four seasons in the NFL, the only thing that has slowed Kamara down has been injury. Luckily, his 2019 MCL tear didn't require surgery. He came roaring back last year in 2020 to make his fourth Pro Bowl in four attempts. And while that's all well and good, there is so much more to Alvin Kamara. He may seem like an Airhead, but Kamara's feet are firmly in the turf, even in the offseason. Just because he sports endorsements from his favorite candy maker and rocks a bull septum piercing doesn't mean Kamara is shallow. The young running back seems remarkably aware of his rare opportunity in life and is making the most of the moment.

Why else would you wear a grill during an NFL game? 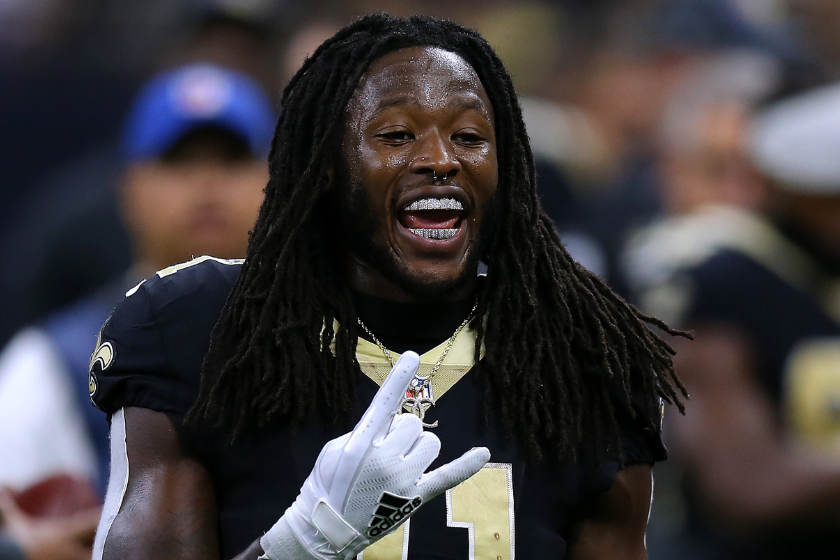 That's right, this man wears some expensive-looking jewelry while playing tackle football with other oversized men. He's not the only football player to do something so brash. Odell Beckham Jr. once rocked a $190,000 watch from jeweler Richard Mille during a season opener for the Cleveland Browns, for example.

You have to be incredibly audacious to wear jewelry while playing for a team synonymous with poop. You have to be even more so to wear that much jewelry in your mouth. Kamara's mouth is just that audacious.

Judging by the number of karats in his mouth, it's safe to say Kamara eats his veggies. Even though he's been sporting different grills in-game since Tennessee, Kamara isn't sure how many diamonds are in his current oral cavity.

Johnny Dang -- a famed Houston Grillmaster -- made the Custom VVS Diamond Grill. Dang gained fame in the 2000s when Southern Crunk Hip-Hop took over the airwaves.

Houston-area artists such as Paul Wall (and nearby Nelly in St. Louis) loved to buy Grillz from Dang, and the rappers still have a business relationship with Dang today.

But back to Kamara. He has tops and bottoms from the Grill God himself. I know what you're thinking, "Dang, that must cost a lot." Yes. Yes it does.

How Much Do They Cost? 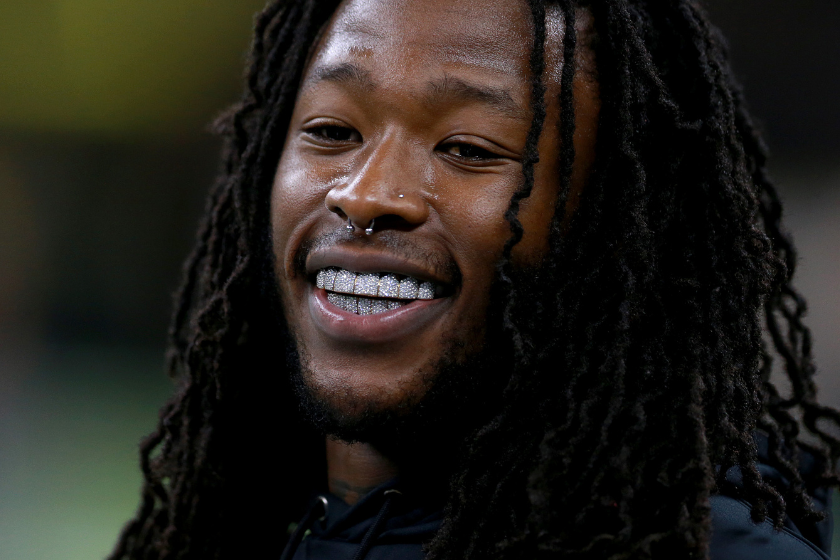 Alvin Kamara is too classy to say, but that didn't stop teammate Cam Jordan from speculating on the Chris Long podcast that Kamara's grills must cost at least $100,000, but probably more. And $100,000 is the low estimate. Alvin Kamara is one in a hundred-thousand or more, a specimen rarer than the diamonds beneath his helmet. Kamara is worth at least $75 million on a five-year deal with the Saints, so don't expect him to drop out of the grill market anytime soon.

NFL linebackers and defensive ends around the league should officially consider themselves on notice. Seriously. This a warning to the Seattle Seahawks, Green Bay Packers, New York Jets and Tampa Bay Buccaneers defenses, to name a few. If you don't want to be juked out of your socks by a dude with a nose ring and diamond grill, stay out of the way of superstar Alvin Kamara.

This article was originally published on June 5, 2021, and has been updated since.