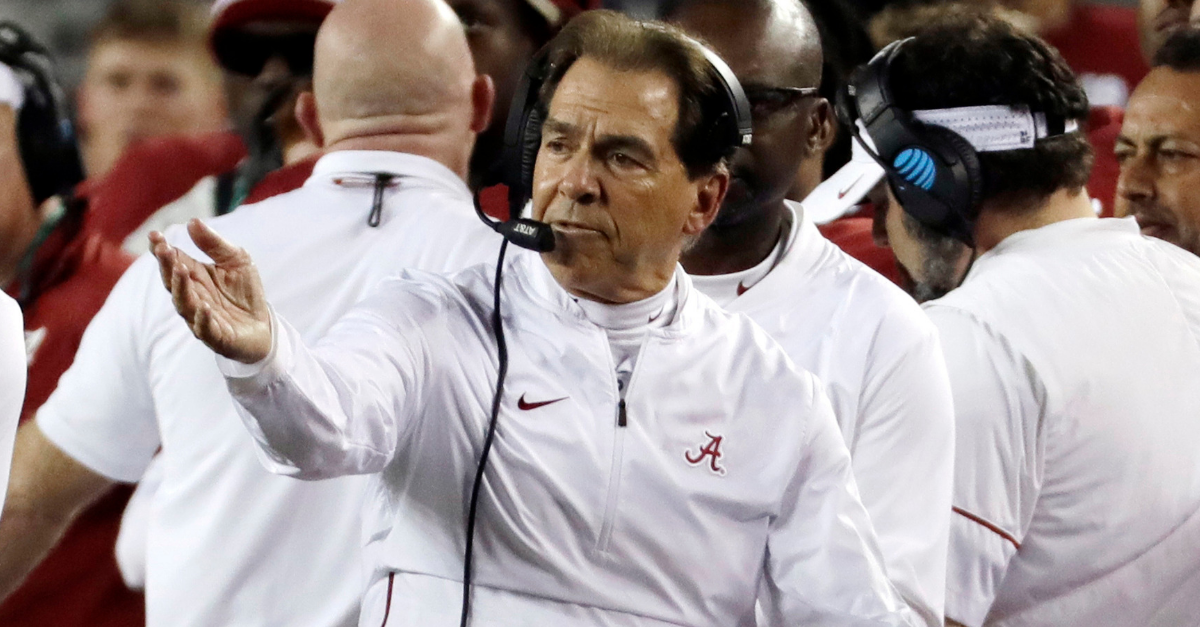 College football is wild, wacky and, most of all, unpredictable. Million-dollar coaches will surprise top-notch recruits in helicopters, sleep over at their houses and do whatever it takes to lure them to their football program. Lane Kiffin even offered a 6-month-old baby a scholarship. Nothing is ever too over-the-top.

Some high school athletes get little attention or interest. J.J. Watt, the three-time NFL Defensive Player of the Year, worked at a pizza shop while taking community college courses before walking on to Wisconsin’s football team. Others, like Cleveland Browns? Myles Garrett (Texas A&M) and Odell Beckham Jr. (LSU), could have picked from 50 or so hats and gone to the college of their choosing.

While most NFL stars? college recruiting stories mirror that of Garrett and Beckham, they might not ever have had a coach want them as badly as Nick Saban wanted Alvin Kamara.

The now-New Orleans Saints star running back was a junior at Norcross High School in Georgia in 2012. One day, Kamara came back from school to find that his mailbox was overflowing with letters — 105 of them, to be exact.

Every single letter was penned by none other than Alabama Crimson Tide head coach Nick Saban, who had just won the 2011 BCS National Championship with the Crimson Tide. Saban clearly wanted Kamara and made sure to write a different message on each letter.

*PIC: Alvin Kamara with an #Alabama hat. He recently signed with the #Tide. pic.twitter.com/S5eIwgwH

RELATED: Alvin Kamara Should Be Your New Favorite NFL Player After This

Kamara, ranked the 42nd best prospect by 247sports at the time, was blown away.

?It definitely caught my attention. But they?re not my favorite college yet or anything like that,” Kamara told the Atlanta Journal-Constitution. “I got home and they were falling out of my mailbox.  It was crazy but I liked it.”

Kamara had interest and offers from all over the United States, including Auburn, Clemson, Georgia, Florida, Florida State, Oregon, Tennessee and USC. The 5-foot-10, 215-pound running back was just as dynamic of a runner and a receiver in high school and college as he is in the NFL.

In his senior year of high school, Kamara led his team to a state championship after rushing for 2,264 yards and 26 touchdowns and hauling in another 286 receiving yards and five touchdowns. He ran away with Georgia Mr. Football honors.

“The first time he touched the ball as a 10th-grader, I knew he was special,” Norcross coach Keith Maloof told The Advocate. “The things that he possessed at the high school level ? he was able to run inside, get the hard yards and catch the ball out of the backfield. … it led us to a 15-0 season.”

Kamara entered a crowded Alabama backfield that already featured future professionals T.J. Yeldon and Kenyan Drake. All-American Derrick Henry entered in the same class to make for a loaded depth chart. Who needs a QB with a stable of backs like that?

Alvin Kamara is headed to #Bama. By may count, that gives Nick Saban 1,000 running backs to use next season

His time in Tuscaloosa was short-lived. A minor knee surgery forced him off the field in August 2013 and he was suspended for a game in November and the Sugar Bowl in December. Citing a “gut feeling,” Kamara transferred from Alabama to Kansas‘ Hutchinson Community College for a year. It was the kind of junior college you’d find on Netflix’s “Last Chance U.”

He could’ve transferred from the SEC and played right away, but Kamara still had something to prove in the conference. So the following year he hopped on a plane to Knoxville and suited up for Butch Jones‘ Tennessee Volunteers.

He totaled nearly 2,000 yards from scrimmage and 23 touchdowns in two years, despite being used in tandem with Jalen Hurd. In one 2016 breakout game against Texas A&M, he tallied 127 rushing yards and 161 receiving yards, plus three touchdowns.

The Saints drafted Kamara in the third round of the 2017 NFL Draft and he’s blossomed into one of the most dynamic backfield weapons in all of football despite (similar to Tennessee) sharing playing time with Mark Ingram.

The question will always loom over Crimson Tide fans, though: What if Kamara had stayed in Tuscaloosa and played alongside Henry and the rest of ‘Bama’s uber-talented teams? The Crimson Tide won the 2015 national championship, but maybe they win in 2013 and 2014 as well.

Oh well. I don’t think Saban loses sleep over it. Now, just tell us what each of those magical letters said.