Once upon a time, you couldn't talk about the National Football League and not mention former Dallas Cowboys quarterback Troy Aikman. His life, both on and off the field, always seemed to be part of the discussion. Being the leader of America's Team certainly had its perks, but he could never escape the spotlight, especially when it came to his love life.

Aikman, who won three Super Bowl rings in four seasons in Dallas, never really settled down until after his NFL playing days were over. He dated, of course, including having a relationship with country singer Lorrie Morgan during the height of the Cowboys' dynasty in the mid-1990s.

Life hasn't always been sunshine and roses, though. The College Football and Pro Football Hall of Fame quarterback has been married and divorced once before.

Today, Aikman calls Monday Night Football on ESPN alongside Joe Buck and enjoys his life with wife Catherine Mooty and his blended family. 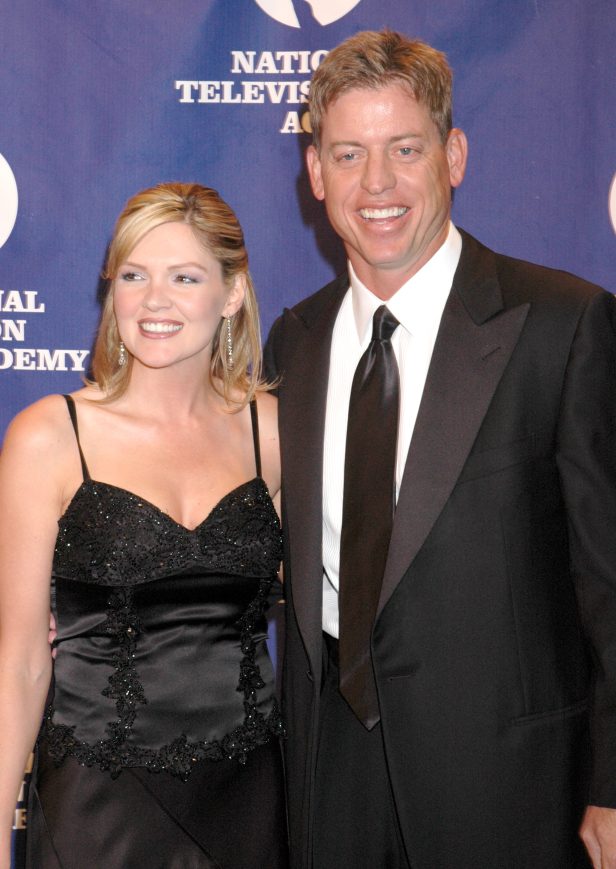 RELATED: Tony Romo Married a Beauty Queen Who Grew Up a Cowboys Fan

For most of Troy Aikman's life, his football team came first. Whether it was in college at Oklahoma and UCLA or winning Super Bowls with the Dallas Cowboys under Jimmy Johnson and Tom Landry, throwing touchdowns was always the top priority.

Then, after a life as a bachelor, former Cowboys publicist Rhonda Worthey came along and swept the star football player and Super Bowl MVP off his feet. The couple got married in a private ceremony in April 2000 in Plano, Texas, just before Aikman's final NFL season.

Worthey had a daughter from a previous marriage and her and Aikman had two daughters of their own: Jordan Ashley Aikman in 2001 and Alexa Marie Aikman in 2002.

Sadly, the former American football player and Worthey divorced in 2011. His ex-wife reportedly received $1.75 million in the divorce settlement.

"This has been a difficult decision for Rhonda and me, but after 10 years of marriage we have decided to separate," Aikman told The Dallas Morning News. "We remain deeply committed to our children and respectfully ask that you honor our family s privacy during this period of adjustment."

It took a few years, but the Hall of Famer former first overall pick in 1989 NFL Draft has found love again.

Troy Aikman, who earned six Pro Bowl selections before concussions ended his NFL career, was single for over five years before he met Catherine Mooty. Many know her as Capa Mooty and her birth name is Catherine Cecile Person.

Mooty was a fashion retailer who co-founded a mobile boutique called Luxeliner, which is basically a food truck but for clothes and accessories. She was also a single parent with two boys of her own: Luke and Val, who both attend the University of Texas. They are now Aikman's stepsons.

The sportscaster and Catherine got engaged in June 2017 in Lake Como, Italy and got married later that year in Santa Barbara, California, near Los Angeles. They currently live in Texas.

Both Troy and wife Capa Mooty are very active on social media, especially Instagram, and look very comfortable posting about their personal life now more than ever.

MORE: Joe Buck's Wife Michelle is a Former NFL Cheerleader (As Was His First Wife)