In terms of star status, there aren't many superstar athletes in Texas as famous as former Dallas Cowboys quarterback Tony Romo. The four-time Pro Bowl football player spent his entire 13-year NFL career with the Dallas football team, where he won 78 games (but not a whole lot in the playoffs), threw 248 touchdowns and penciled himself in as one of the franchise's greatest passers.

Romo retired in 2017, transitioned to sports broadcasting and now makes more money than many current NFL quarterbacks calling games alongside Jim Nantz in the booth for CBS Sports as a color analyst. It's no surprise that someone of Romo's stature ended up marrying a former beauty pageant queen who competed in Miss USA, but he also dated two bombshell singers when he was a free agent on the dating scene.

Romo's lack of success in the postseason is well-documented (remember the playoff fumble?), but he's never had a problem scoring some of the most beautiful and famous celebrities. Let's take a closer look at some of those relationships. Unsurprisingly, he ended up with a former Miss USA contestant like Tim Tebow and Christian McCaffrey.

Romo Dated Jessica Simpson & Broke Up With Her Over Email 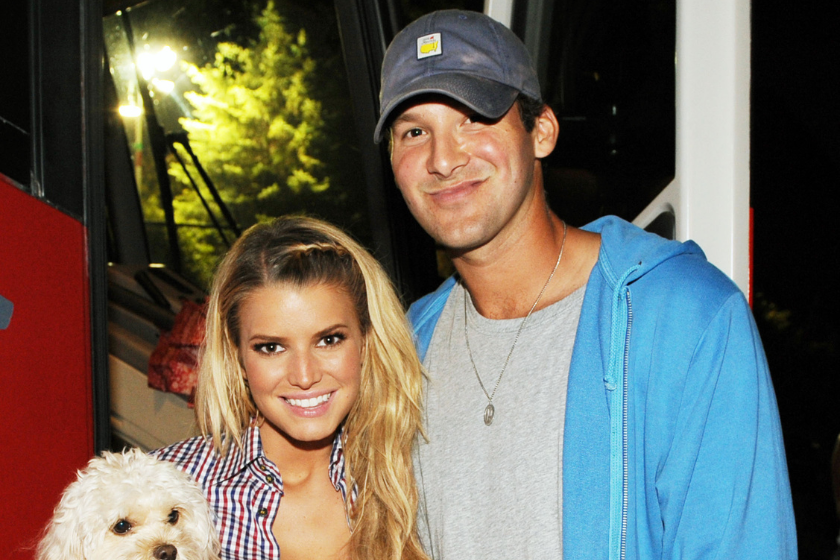 In December 2007, she was spotted at his game between the Cowboys and Philadelphia Eagles. They stirred the sports media world when pictures of them at a Cabo San Lucas resort surfaced before a pivotal playoff loss to the New York Giants.

"Tony didn't believe that for a second. And within that second, he broke up with me right there. Two years, gone with an email," she wrote in her book, according to TMZ.

I guess she found out those boots really were made for walking...right out of his life.

His Relationship With Carrie Underwood 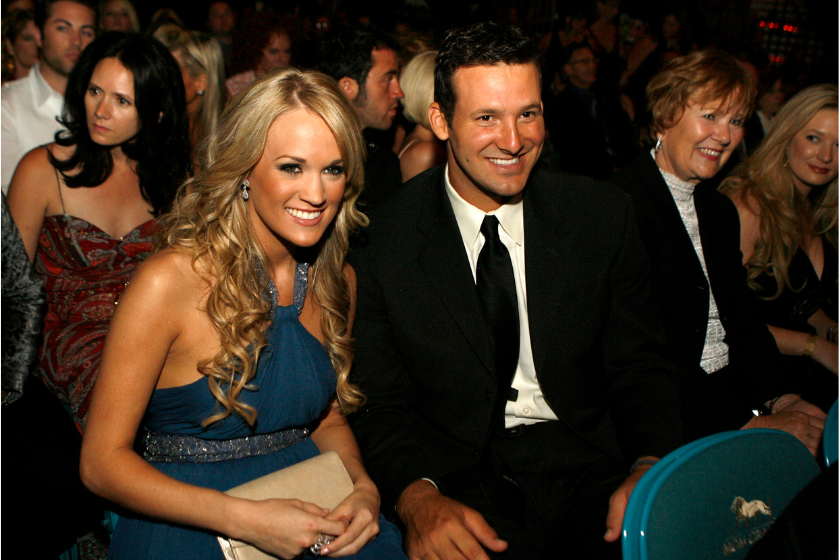 RELATED: Dak Prescott's Girlfriend Natalie is His Shining Star Who Keeps Him Going

Romo and Underwood dated briefly in 2007 before he and Simpson were an item.

"Point blank, [Romo] is about football," she told Esquire of their relationship. "I don't know if it's that I'm not quite his type or whatever, but I don't think he's at the point in his life where he would be willing to sacrifice football.

"He hated so much that people thought that he was paying more attention to me and that was causing him to not do well."

Crazy enough, Underwood went on to date Romo's future brother-in-law in 2008. Hopefully she never took a Louisville Slugger to both headlights of either of their cars. 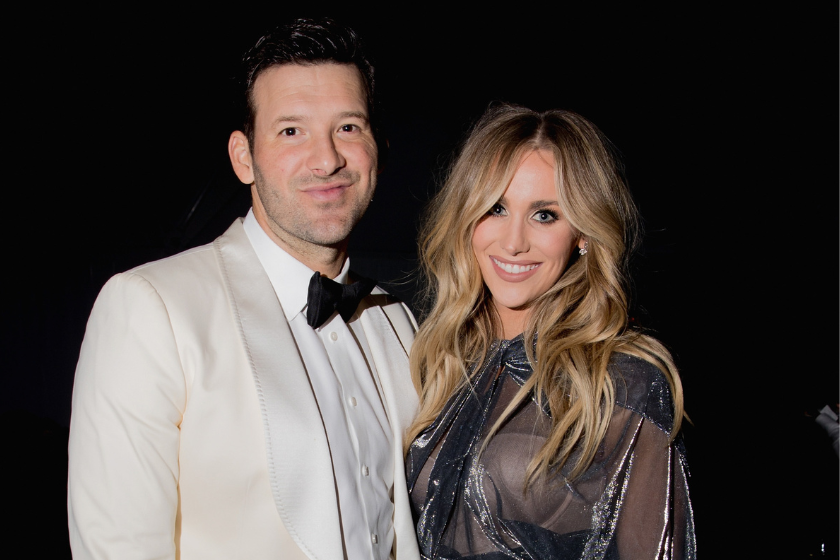 Candice Crawford was born on December 16, 1986, in Lubbock, Texas. She grew up near Dallas, though, and studied journalism at the University of Missouri. While in school, she won Miss Missouri USA and was one of 51 Miss USA contestants to fly out to Las Vegas for the 2008 Miss USA competition. The then-21-year-old beauty queen finished in the top 10.

Crawford traded swimsuits and gowns for an on-air career as a television personality afterward.

She worked in the Dallas-Fort Worth area as a sports reporter when she met Romo for the first time, and the two began going steady in 2009. That's right, he chose a reporter instead of a Dallas Cowboys cheerleader.

Their first date was hilarious because she had to hide her parents when the starting quarterback came over because they were diehard Cowboys fans.

"My parents, being massive Cowboys fans, she didn't want them in the house. And they said, 'We're already here. What do you want us to do?' And she said, 'Hide. Hide in the back,'" Candice's brother Chace told "The Rich Eisen Show." "She made my parents hide. She didn't realize Tony was coming over to pick her up. It caught her off guard, so she pushes my parents back [in their master bathroom]. I thought that was really funny."

Romo gave her an engagement ring and made her his fiancée the following year. They officially wedded in May 2011 at Arlington Hall in Dallas (I guess they didn't want a destination wedding to, say, Miami). Crawford then became Candice Romo.

Candice Romo didn't need to marry Tony to boast stardom in her family. She's the younger sister of actor Chace Crawford, who starred in the hit TV show "Gossip Girl." He dated Carried Underwood in 2008 after Tony Romo did. Small world.

Candice and Tony have been happily married over the last decade and made plenty of public appearances. In 2010, they attended the TIME/CNN/People/Fortune White House Correspondents' Association Dinner and MSNBC Afterparty at the Washington Hilton in Washington, D.C. Jay Leno performed and President Barack Obama and First Lady Michelle Obama attended.

They're also big sports fans of their local teams. The Romos have showed face at Dallas Mavericks NBA games together. The former NFL player himself played on the varsity basketball team at Burlington High School in Wisconsin. Candice appears to be pretty athletic herself: 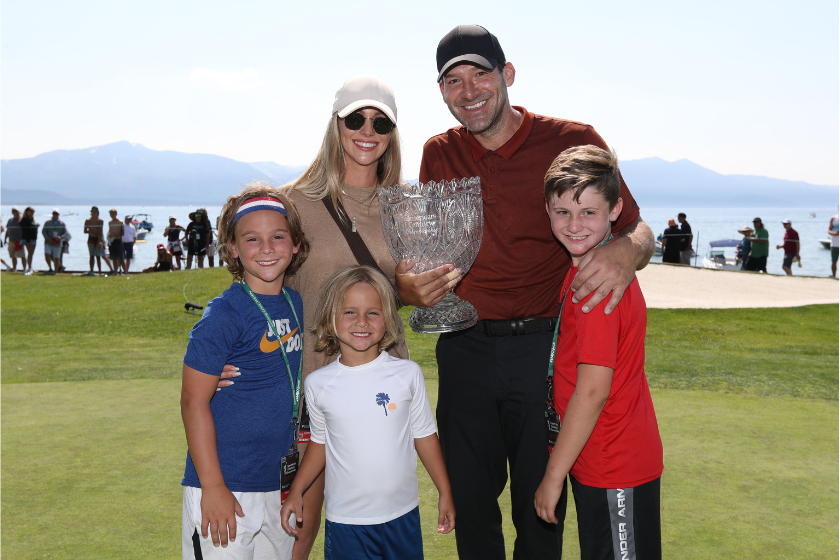 Tony Romo and Candice Romo have three sons together and might not be done expanding their family.

First child Hawkins Crawford Romo was born in 2012, Rivers Romo in 2014 and they welcomed their third son, Jones McCoy Romo, in 2017. Romo said he loves being a dad.

"Oh, it's super exciting!" the broadcaster told Entertainment Tonight. "My third boy, you know, so, building my own basketball team here -- getting close... I think the wife might want to stop at this point, but we'll push her again in a year or two. Once they hold that baby, and that baby grows up a little bit, they want to hold that baby again, so... that's just how wives are, and moms. I'd be all for trying for a little girl, but it's really not my body, though."

As the Romo family grows, one has to wonder: Could this be the next Manning family? They spend a lot of time together when Tony isn't in the broadcast booth, which makes one wonder if the Romos are done building their family. I'm sure Dallas Cowboys fans wouldn't mind that.

This post was originally published on May 15, 2020, but has been updated.