NFL quarterbacks are some of the most high-profile athletes in the world. Almost every starter makes more than $20 million per year unless they're still young and not making huge money like Kyler Murray, Justin Herbert, Patrick Mahomes and Joe Burrow.

Dallas Cowboys quarterback Dak Prescott is definitely no exception. The two-time Pro Bowler and former fourth-round pick in the 2016 NFL Draft is the face of "America's Team" as they try to get beyond just winning the NFC East and win a Super Bowl. That means the $160-million quarterback is scrutinized for everything he does on and off the field. When your net worth balloons to that size, you have to expect some helicoptering from armchair quarterbacks.

The Cowboys star likes to keep his private life pretty private for the most part. We know the Prescott family has endured plenty of tragedy and difficult times. His brother, Jace Prescott, died at 31 in April 2020. His mother, Peggy Prescott, passed away in 2013 from colon cancer.

When it comes to who the 28-year-old Sulphur, Louisiana native and former Mississippi State University Bulldog is dating, you won't find him posting about any of his relationships on Twitter or Instagram. Still, that doesn't mean he isn't in high demand in the dating world. 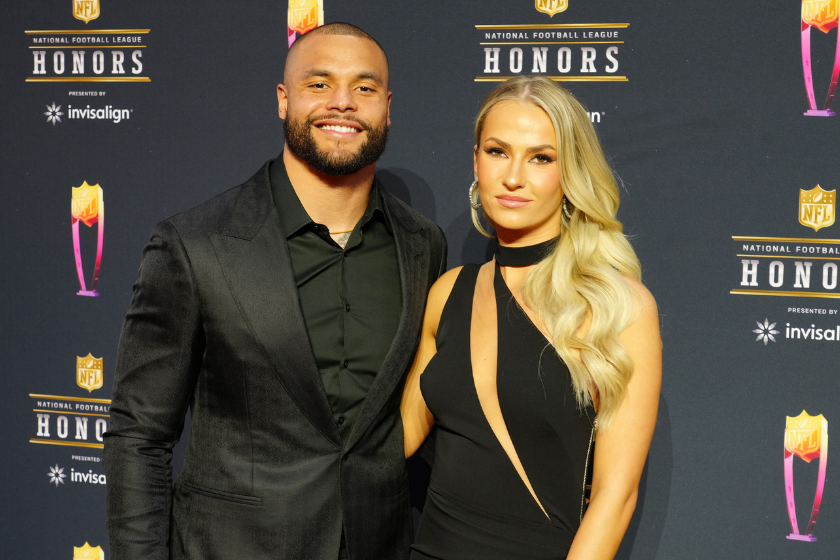 Dak Prescott rarely posts about his girlfriend. However, she posts on her Instagram a ton about their life together. But back in 2017, he said he wasn't looking for a woman.

"Yeah you women need a lot of time. And my time is focused on football right now - my first love," he told Sports Media's Inside the Huddle in 2017.

Still, a woman by the name of Natalie Buffett has caught his eye. The 24-year-old model boasts over 71,000 followers on her Instagram account, too. And to be clear, that's Natalie Buffett with two T's, not Natalie Buffet like what they have at Golden Corral.

On Prescott's 27th birthday in 2020, she shared a photo saying, "Happy birthday babe!" Prescott responded in a comment calling her "my girl." Some might say that makes them Instagram official. Buffett also posted a photo of the two together last Halloween along with several others since.

Buffett first was mentioned in headlines back in April 2020, when the Dallas-based National Football League player reportedly threw her a birthday party and invited teammate Ezekiel Elliott. The gathering drew criticism for ignoring social distancing rules during the COVID-19 and coronavirus pandemic.

The 24-year-old is reportedly from Florida and earned a civil engineering degree from Southern Methodist University. Buffett was right by Prescott's side as he recovered from his brutal compound fracture ankle injury he suffered against the New York Giants in 2020.

In the offseason ahead of the 2022 season, the pair's vacation photos made the rounds, confirming that they were still together. 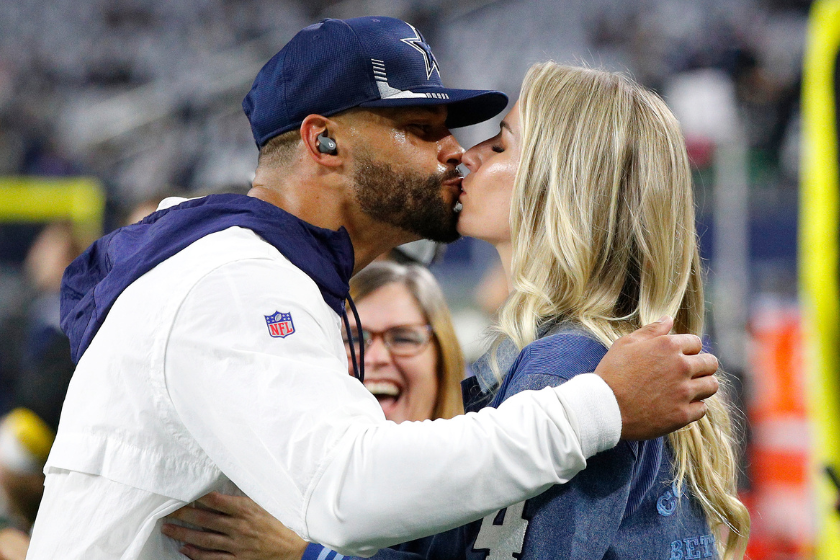 The football player's alleged list of former ladies goes on.

He was linked to Instagram model and social media influencer Ireland Borba (he must be a big geography guy) in April 2019. He and model Estrella Nouri were rumored to be an item in 2018. She moved on to NFL star Odell Beckham Jr. before getting back with Prescott in October 2019, according to SportsGossip.com.

Prescott reportedly dated a woman named Yasmine Lee in 2017 and prior to her someone named Kayla Puzas. He and Puzas reportedly dated while they were in college for a couple years before splitting in 2016. She then scrubbed him off her social media accounts and then dated "Chrisley Knows Best" reality TV star Chase Chrisley.

Dallas Nicole Parks was a Playboy model from Austin, Texas, who participated in the annual Playboy Miss Social competition, an event that now appears to be kaput.

Parks was rumored to be seeing Dak Prescott in 2016, sometime after she also reportedly dated Johnny Manziel. There's even a picture of her next to the former college football legend and Cleveland Browns castaway.

Parks often posts photos on social media of her Dallas Cowboys jerseys and is apparently more than just a fan of the one and only Dak Prescott.

Prescott and Parks dated sometime in 2016, but their "relationship" came to a screeching halt once her name became public. The Cowboys reportedly told Prescott to "cool it" and apparently broke things off with her.

She took to Twitter to bash the quarterback, saying he was "fake as his character on the field" and if you "wanna be treated like s***...go to him." Shortly after, she told everyone she was hacked. Then she said she was drunk. Which is it, Ms. Dallas?

Parks later cleared the air regarding her love for Texas quarterbacks.

"I never dated Johnny, I don't date dak. So from the source let me enjoy football and stop using me as a prop for these rookies," she tweeted in October 2016.

Prescott, too, came out and publicly said he didn't even know who Dallas Nicole Parks was. That's interesting considering they've taken a picture together. But hey, maybe it's photoshopped.

"Funny Fact: Linked to a Girl Named Dallas that I Don't Even Know just bc I play for Dallas lol 'come on man'(MNF Voice)," his tweet read.

Let's take a second to appreciate that Dak Prescott "dated" a girl with the first name of the city he plays in.

Can you imagine Buccaneers quarterback Tom Brady marrying someone named Tampa? What if Russell Wilson ditched Ciara for a Seattle? Ryan and Nashville Tannehill or Cam and Charlotte Newton would also make pretty good couple names. Please, Josh Allen, find someone named Buffalo. And if there are any women named Pittsburgh, look up Ben Roethlisberger in the phonebook.

And if we're talking about sports stars, we might as well mention Los Angeles Lakers superstar LeBron James. Los Angeles and LeBron James has a nice ring to it. Just saying.

These are the kinds of things ESPN segments are made for.

Hopefully, Cowboys QB Dak Prescott is more focused on throwing touchdowns to Ezekiel Elliott and Amari Cooper this NFL season in AT&T Stadium. The passer inked a four-year, $160 million new contract in March 2021 and has his sights set on the playoffs and winning a Super Bowl for Jerry Jones. Unfortunately, Dak has spent most of the 2022 season on the sideline with a thumb injury. But backup QB Cooper Rush kept the Cowboys trending in the right direction as they continue to battle the Eagles for the NFC East crown. But now that he's back, Cowboys fans shouldn't be surprised if he continues that success and they also shouldn't be surprised if he posts about his gal pal.

This article was originally published on June 3, 2020, and has been updated since.

MORE: Ezekiel Elliott & His Girlfriend Stay Out of the Public Limelight