The Super Bowl has something for everybody. Football, of course, is front and center, but commercials have become just as synonymous with the NFL's biggest game as the action on the field itself. Then there's the parties, the food and the slow dread of realizing you have to go into work the next day as you finish your third helping of buffalo chicken dip.

Nestled in between it all is the Super Bowl halftime show. The greatest 15-minute entertainment event of the year usually features a legend or a current global superstar. Some are iconic, like Michael Jackson's performance in 1993, Prince's in 2007, Madonna's in 2012 and Katy Perry and her dancing sharks in 2015. Others, like Janet Jackson and Justin Timberlake's 2004 performance, are remembered more for wardrobe malfunctions.

Throughout the Super Bowl's history, there are the halftime performances we may not clearly recall, too. These are the ones that were talked about at the water cooler until the Tuesday after the game and left to reside in our memories from there on out. However, there are a lot of hidden gems in this category.

Let's take a look at the eight best Super Bowl halftime performances you may have forgot about.

8 Super Bowl Halftime Performances We All Forgot About

Disney Characters/New Kids on the Block (1991)

Before huge artists headlined the Super Bowl, fans were treated to marching bands and random themes. In 1991, that meant paying tribute to "It's a Small World" on the 25th anniversary of the Super Bowl. Who better to join the rambunctious collection of Disney characters than New Kids on the Block?

This performance marked the beginning of major artists taking over the halftime show. For that, it deserves to be remembered.

RELATED: How Long Does Halftime Last in the Super Bowl?

Aerosmith and NSYNC is just a glorious combination for 2001. First, you had an intro sketch where Ben Stiller renames the headliners Aerosync. Then, you have the two trading hits until Britney Spears, Mary J. Blige and Nelly step in to assist on "Walk This Way" to close out the show. Somehow, the drastically different acts were able to pull off a riveting concert.

Aerosync's performance was a turning point in Super Bowl halftime show history because it was the first time fans were allowed to go on the field. It was also Justin Timberlake's first of three halftime show appearances. 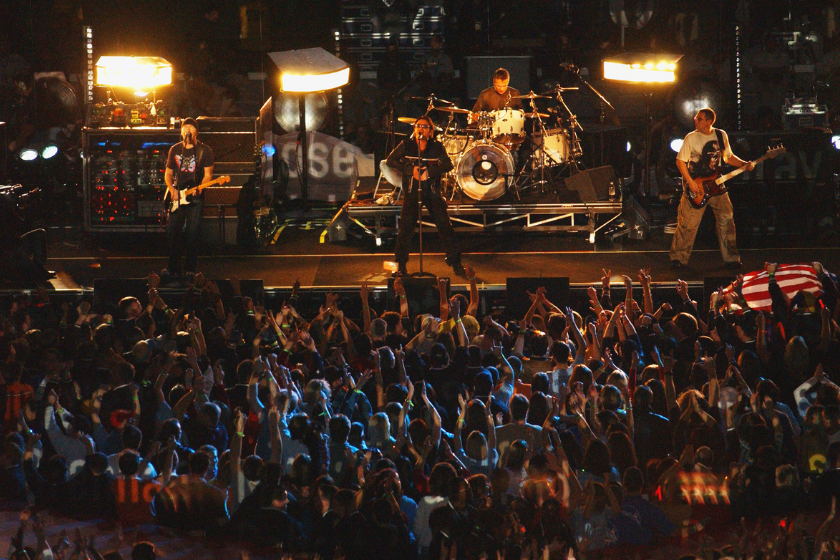 With the United States still healing from 9/11, the country needed some American spirit for Super Bowl XXXVI. The booking agents looked no further than Dublin, Ireland to fit the bill.

Nothing against U2, but I agree with Vulture in that someone like Bruce Springsteen would've been perfect here. Or Tom Petty. I digress. Bono and U2 put on on good show despite it being stripped down compared to today's production standards and Springsteen and Petty later got their chances to play the big game.

This one brings back a lot of high school memories. There was nothing that would get the people going like the Black Eyed Peas from 2008 to 2012. Nothing. So, when they showed up to perform at the Super Bowl, it was prom for everyone.

The Peas kept the energy high and the cameo by Usher blew the roof off the place.

Incredible. Outstanding. Amazing. Incredible. Wow. Outstanding. If anyone from the BeyHive asks my opinion on Beyoncé's 2013 halftime performance, those are the only words I'm using to describe it.

I'm cheating here since it's freaking Beyonce we're talking about, but I forgot she had her own show after seeing her pop up during Coldplay's set in 2016. I made up for it by watching her 2013 set 100 times since realizing this, Beyhive. Please spare me. Anyway, Beyoncé utilized an all-female team, including her old group Destiny's Child, to put on an electric show with old and new hits. Her charisma and stage presence make it hard to take your eyes off the screen.

Fans were looking for anything to keep them interested in what appeared to be an Atlanta Falcons routing of the New England Patriots. Lady Gaga delivered. She started off her performance by leaping down from the top of Houston's NRG Stadium and completely reenergized the crowd.

She then pulled out all the stops. An exquisite outfit, fun dancing, the hits and ballads. Maybe Tom Brady caught a glimpse of her performance and it gave him all the inspiration he needed to complete the famous 28-3 comeback.

The Weeknd's halftime performance is memorable because of the context surrounding it. It was the first halftime show to happen in the COVID-19 era and had the honor of being many people's reintroduction to live music.

Plus, the memes that stemmed from him wandering around while singing "Can't Feel My Face" were glorious during the time they spent dominating the Internet.

MORE: The 15 Funniest Super Bowl Commercials Ever Made, Ranked