Joe Sakic is the most beloved player in Colorado Avalanche History.

He was a one-franchise ice hockey player, and he still is dedicated to the only NHL team he has ever known (even if he did have to move cities to stick with them). Sakic's allegiance to the Avalanche has paid off for him as an NHL player and hockey operations bigwig, especially financially.

How much is he worth today? 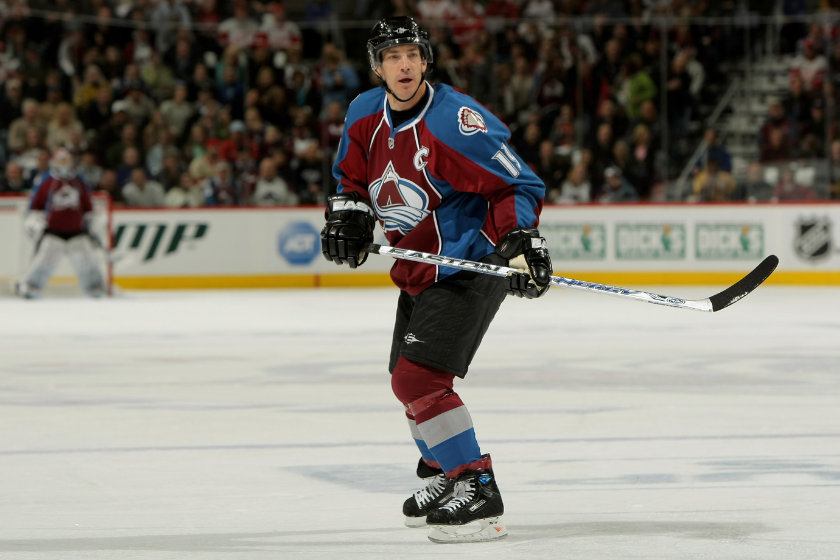 RELATED: Wayne Gretzky's Net Worth Really Makes Him "The Great One"

Joseph Steven Sakic was born in Burnaby, British Columbia, in Canada to Marijan and Slavica Sakic. His parents were immigrants from Croatia, which was then still part of Yugoslavia.In fact, Joe didn't really start speaking English until he entered the Canadian educational system, as his family spoke Croatian at home. Ultimately, though, Sakic spoke the language of hockey. He wanted to be an NHL player following in the footsteps of his hero Wayne Gretzky. Many Canadians grew up idolizing "The Great One," but few got as close to his standards as Sakic.

Sakic began his juniors career in the Western Hockey League with the Lethbridge Broncos. The team then moved to Swift Current, Saskatchewan. After tallying 130 points in 72 games in his first season with Swift Current, the Quebec Nordiques drafted Sakic 15th overall in the 1987 NHL Entry Draft. Instead of hopping right to the NHL, Sakic decided to spend one more season in the WHL. It went pretty well. Sakic notched 78 goals and 160 points in 64 games. He was named Player of the Year -- not just by the WHL but the overarching Canadian Hockey League that encompasses all the Canadian junior leagues. Clearly, he was ready for the NHL.

Sakic tallied 23 goals and 62 points in the 1988-89 season, but an ankle injury may have put the kibosh on his Calder Trophy (Rookie of the Year) dreams. However, he bounced back with two 100-point seasons in a row for the Nordiques and became the 1992-93 season captain. That year, he led Quebec to the playoffs for the first time in six seasons. Still, the Sakic story really picks up when the Nordiques moved to Denver and became the Colorado Avalanche.

In 1996, Sakic was joined by fellow future Hockey Hall of Fame players Peter Forsberg and Patrick Roy to put together an incredible roster. Sakic notched 120 points in leading the Avalanche to a President's Trophy. He took things up another notch in the playoffs. Sakic picked up a whopping 18 goals and 16 assists in 22 games in leading Colorado to a Stanley Cup victory in the team's first season in its new home. Unsurprisingly, Sakic won the Conn Smythe Trophy as the most valuable player of the postseason.

Let's flash forward to 2001, another season that ended well for the Avalanche and their captain. Sakic racked up 54 goals and 118 points to win his only Hart Memorial Trophy as MVP. Famously, Ray Bourque joined the Avalanche that year to try and finally win a Cup. Colorado made that dream come true, as Sakic and the Avs bested the New Jersey Devils to get Bourque his ring. 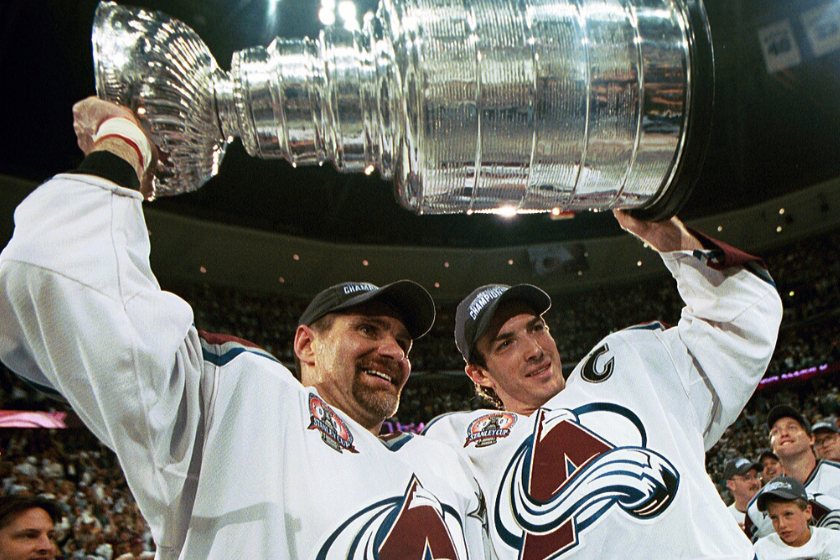 B Bennett via Getty Images

During the 2006-07 season, the professional hockey player had 100 points, making him the second-oldest player to hit the 100-point mark behind Detroit Red Wings legend Gordie Howe. Sakic would stick around with the Avalanche -- the only franchise he would ever play for -- through the 2008-09 season.

The man they call "Burnaby Joe" after his birthplace retired with 625 goals and 1,016 assists. He made 12 All-Star Games, won two Cups, one Hart and one Conn Smythe. Sakic also represented Canada at three Olympics, including winning gold in 2002.

Moving to the Front Office 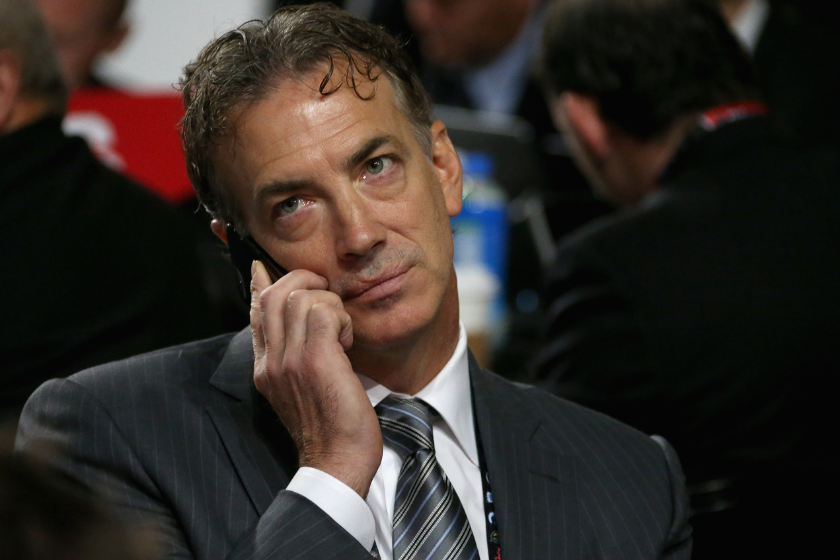 In 2012, Sakic was part of an impressive Hall of Fame class with Pavel Bure, Mats Sundin, and Adam Oates. That was a big year for the Canucks -- in addition to Bure being a former Canuck, Sakic grew up a Canucks fan in British Columbia.

After retiring, Sakic stayed with the Colorado Avalanche in an advisory role. The team was struggling, though, and decided that a living legend might be the cure for what ailed them.So, Sakic was named Executive Vice President in 2013. Soon enough, he would take on the role of General Manager as well.

Under Sakic's stewardship, the Avalanche have once again become a perennial Cup contender. This year, Colorado steamrolled through the regular season, recording 56 wins -- the most in franchise history. They carried the momentum into the playoffs by defeating the Nashville Predators, St. Louis Blues and Edmonton Oilers en route to a Stanley Cup Finals date with the two-time defending champion Tampa Bay Lightning. The deep roster Sakic put together is a major reason the Avalanche have risen to one of the league's best teams. 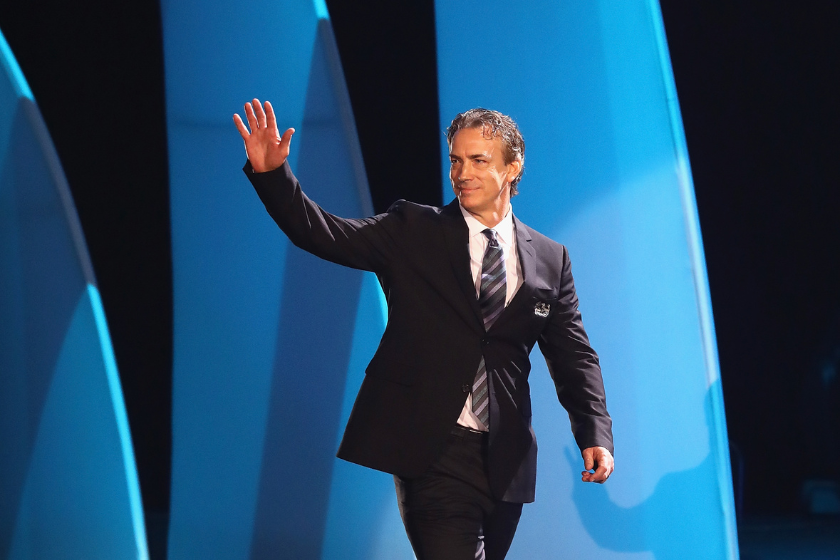 Sakic met his wife Debbie when he was in Swift Current playing for the Broncos. Together, they have three children. Their son Mitchell was born first, and then the couple had fraternal twins, a son Chase and a daughter Kamryn. Fortunately, he's made plenty of money to support a family.

According to Celebrity Net Worth, Joe Sakic's net worth is $60 million, and he's still in an executive role.

As a one-team player and long-time captain, Sakic set the standard for the next generation of players such as Sidney Crosby and Alex Ovechkin. Not bad for ol' "Burnaby Joe," huh?