The Colorado Avalanche have been -- for lack of a better word -- an avalanche this year. The Denver-based NHL team cruised to a Central Division title with 56 wins -- the most ever in franchise history -- and a ridiculous 32-5-4 mark at Ball Arena.

Only the Florida Panthers had a better overall record, but they suffered the same fate as the previous seven Presidents' Trophy winners by failing to get out of the second round of the postseason. So, in a way, the Avs dodged a bullet by failing to win the regular season championship. They learned their lesson last season after winning it and falling to the Vegas Golden Knights in the Western Conference semifinals.

But, the past is the past. Colorado has been on fire in the 2022 NHL Playoffs. They swept the Nashville Predators in the first round, beat the St. Louis Blues in six games in the second round and swept Connor McDavid and Edmonton Oilers in the Western Conference Finals. The only thing standing between them and the Stanley Cup is the two-time defending champ Tampa Bay Lightning. It should be a dandy, and even though Tampa Bay has championship experience, I like Colorado's chances because of its deep roster.

The man who headlines Colorado's collection of talent is Nathan McKinnon. McKinnon has been the franchise cornerstone since he was first overall pick in the 2013 NHL Draft. This year, he's truly come into his own as one of the best players in the league. He's dynamic, he's fast, he's capable of scoring hat tricks at any moment, and he had one of the best goals I've ever seen against the Blues in the second-round playoff series.

It's a given MacKinnon has a high profile on the ice, but what about his life off it? Well, the Halifax, Nova Scotia, Canada native likes to keep his private life as it's described: private. However, his girlfriend, Charlotte Walker, will always offer her unconditional support. 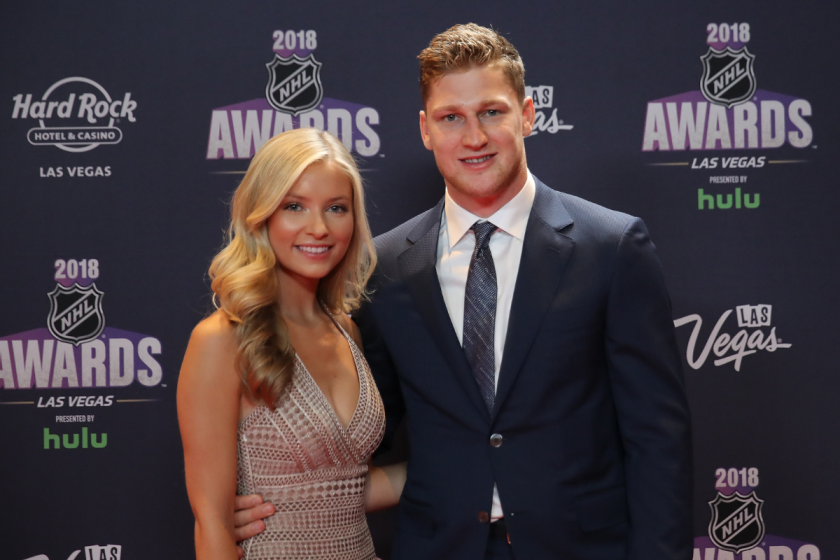 RELATED: Who is Connor McDavid's Interior Design Genius of a Girlfriend?

I've written a decent amount of profiles on players' significant others. Some are out in the open while others keep a low profile. Of all the ones who steer clear of the limelight, Charlotte Walker might take the cake.

There isn't much out there about the professional ice hockey player's better half other than they have reportedly been together since 2016. The couple allegedly linked up after MacKinnon ended things with Canadian actress Vanessa Morgan. Given how long they've known each other, I assume Charlotte is Canadian as well, but that's just a guess.

Besides that, the only evidence of MacKinnon and Walker's relationship are their appearances at public events together -- such as the 2018 NHL Awards. However, she reportedly rarely misses an Avalanche game, and you can bet she won't be missing a Stanley Cup Finals match. There are also rumors that the two are engaged, but again, those have yet to be confirmed.

Neither have acknowledged their relationship on social media, either. MacKinnon, clearly a private person, keeps his profiles all about hockey, but he did welcome Charlotte to Twitter back in 2015.

Props to MacKinnon for keeping his personal life so close to the chest. Professional athletes have enough publicity as it is, and when they can have some semblance of a normal life, I have to tip my cap.

MORE: College Hockey's Greatest Honor is Named After a Player Who Turned Down the NHL for WWI