Mark Messier is one of the best hockey players of all time. Sometimes it's easy to forget that.

It happens when you are forever linked to a teammate like Wayne Gretzky, who was nicknamed "The Great One." Still, Messier made 15 All-Star Games over his remarkable 26-year career.

They call Messier "The Messiah" in New York, so we've really dropped the ball on giving Messier the love he deserves. Since finishing his lengthy career in the early 2000s, what's he been up to in retirement? 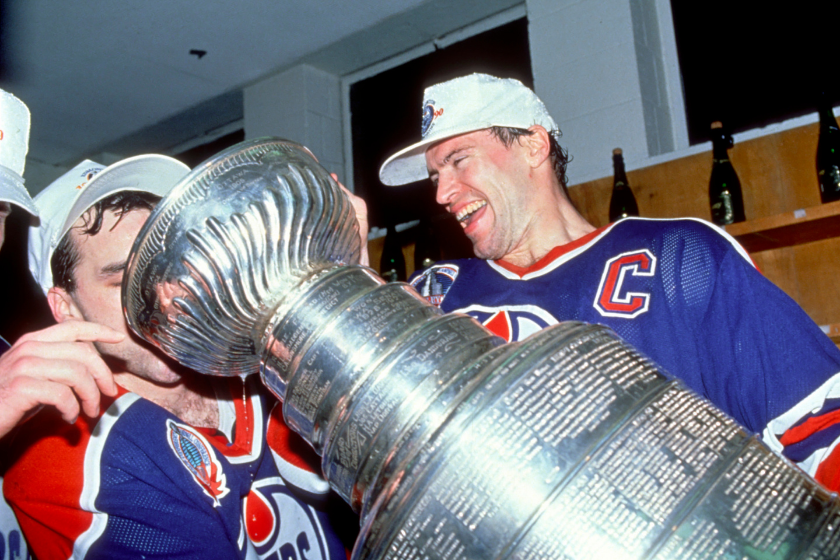 RELATED: Joe Sakic's Net Worth: How He Made An Avalanche of Cash

Mark Messier was born in St. Albert, Alberta, Canada. He's the son of Doug Messier, a hockey player and coach whose career topped out in the minors. The same is true of Doug's other son Paul, who briefly played with the Colorado Rockies (now the New Jersey Devils).

Mark, though, grew into a formidable force. "Moose" made his professional hockey debut in the WHA, where he played for the Indianapolis Racers and Cincinnati Stingers.

Messier's time in the WHA was brief because the league folded after his first season in the league. The Stingers were not one of the teams added to the NHL, so their players dispersed into the National Hockey League. However, since Messier was still a teenager, he had to enter the 1979 NHL Draft, where he was taken in the third round by the Edmonton Oilers.

It took "Moose" a little time to get into the swing of being a professional. He was sent down to the minors as a rookie for disciplinary reasons because he missed a team flight. Eventually, things worked out. In the 1981-82 season, he tallied 50 goals and made his first of many All-Star Games.

The Edmonton Oilers were a dynasty in the '80s built on Gretzky, Messier, Jarri Kurri and Glenn Anderson. In the 1984 Stanley Cup Final, the young Oilers took on the New York Islanders, who had won four consecutive Stanley Cups.

Gretzky has attributed the Oilers 1983 Stanley Cup Final loss to those same Islanders as the fuel for the Oilers cup runs. After losing the series, Gretzky walked by the Isles locker room and was shocked by what he saw. Instead of the raucous celebrations we've come to see in today's championship celebrations, the Islanders were beaten, broken and bruised. Sure they were happy with their success, but Gretzky took note of what it took to win it all. You have to put everything you have on the line, including your body.

In that 1984 Stanley Cup Final, Messier scored a massive goal in Game 3, and when the playoffs concluded, the Oilers were Stanley Cup champions for the first time. On a team loaded with talent, Messier won the Conn Smythe trophy as the playoffs MVP. That task seems almost more difficult than winning the Stanley Cup itself.

The new Edmonton juggernaut added Stanley Cup championships in 1985, 1987 and 1988, with only a title run by the Montreal Canadiens stopping them from winning five in a row.

Then, Gretzky was traded to the Los Angeles Kings. You may have heard about that. Messier did not let the Oilers fall by the wayside, though.

In 1990, with no "Great One" by his side, Messier tallied 45 goals and 129 points and won the Hart trophy. The Oilers beat the Bruins to add another Stanley Cup ring for Messier. Unfortunately, it would be his last with Edmonton.

Concerned about the Oilers' decision making and looking for a new contract, Messier issued a trade demand before the 1991-1992 season. As a result, Oilers general manager Glen Sather sent Messier to the New York Rangers, where he quickly took on the role of captain and locker room leader. For Oiler fans, it was the Gretzky departure all over again. For New York Ranger fans, it was a sign that good things were coming to Madison Square Garden. 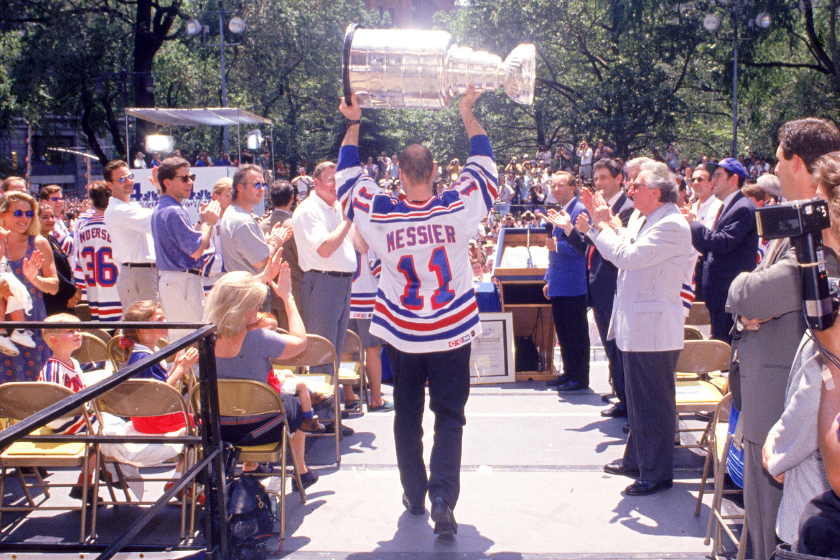 Messier's first regular-season campaign at Madison Square Garden ended in his second Hart. Still, the playoffs ended with an ousting at the hands of the Penguins. This was a problem, as the Rangers were mired in a bit of a Cup drought. The Rangers had not won a Cup since 1940. 54 years without any success is maybe okay for a smaller market, but when you play in the same town as the Yankees, you can't settle for mediocre.

The following season the Rangers missed the playoffs, which had never happened to Messier before. That led to the hiring of "Iron" Mike Keenan as head coach before the 1993-94 NHL season. But, again, it would pay off for all parties involved.

Messier and the Rangers were facing the New Jersey Devils in the Eastern Conference Finals. They were behind 3-2 in the series. New York's captain was undeterred, though, promising a win in Game 6 to the New York media. He then racked up a hat trick to lead the Rangers to a victory, and the team took home the series in Game 7.

That led to a matchup with the Vancouver Canucks in the Stanley Cup Final, which went to seven games. Messier scored the game-winning goal in that pivotal contest and lifted the Rangers' first Cup in 54 years. Brian Leetch may have won the Conn Smythe, but Messier was the face of that team.

Messier and Gretzky actually reunited on the Rangers for a season. Still, Messier left for the Canucks as a free agent. Not precisely an "If you can't beat 'em, join 'em" scenario. Messier spent three years with Vancouver. While he was still a solid player, he was also in his late thirties and incapable of carrying a team to the playoffs, much less the Cup.

However, Messier did not retire. Instead, he returned to New York for four more seasons with the Rangers. In his last season, he scored 43 points at the age of 43. If not for the lockout wiping out the following season, he may not have retired. But, instead, Messier did indeed finally hang up the skates. 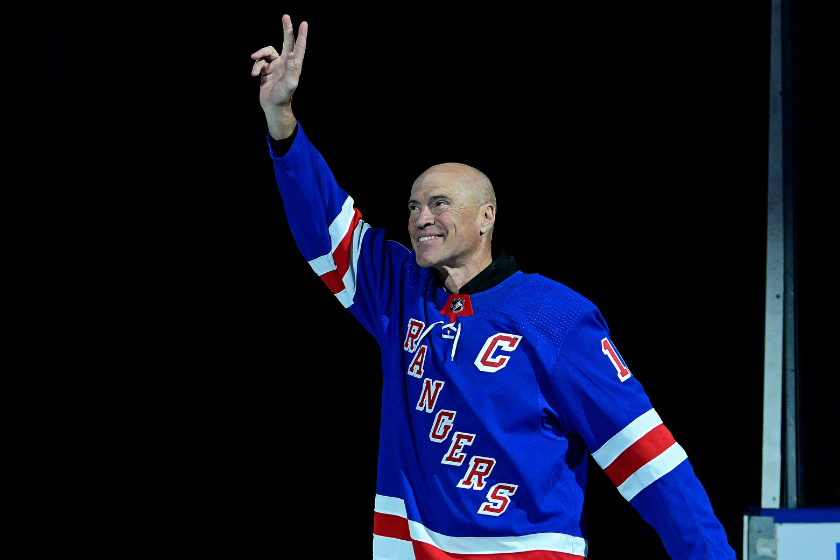 Messier played a literal quarter of a century in the NHL. He was the last active player in the National Hockey League who had played in the WHA and the last active player who had played in the '70s. Messier ranks third in career points (although still he's 1000 points behind Gretzky) and career games played, and he has the second-most playoff points ever. As an NHL player, he racked up two Harts, one Conn Smythe, six Stanley Cups and 15 All-Star Games.

"Moose" was selected for the Hockey Hall of Fame in 2007 to the surprise of nobody. He spent a little time as a special assistant to the general manager for the Rangers but hasn't really worked in hockey much. However, Messier did help turn an armory in the Bronx into an indoor ice facility with nine rinks.

The NHL also now gives out the Mark Messier Leadership Award, which is given to the player that best exemplifies leadership on and off the ice. Not bad for a guy who got sent to the minors for missing a flight as a rookie.

Like a lot of former athletes, Messier recently got into the CBD game. He's now an "equity partner" and "brand captain" for Akeso CBD Water, which seems to be pitching itself as a CBD-infused, electrolyte-filled drink for athletes.

Messier is also worth an estimated $65 million, according to Celebrity Net Worth. Messier was paid handsomely for his legendary career. Just ask the people of Edmonton and New York.

MORE: Wayne Gretzky's Net Worth Really Makes Him "The Great One"