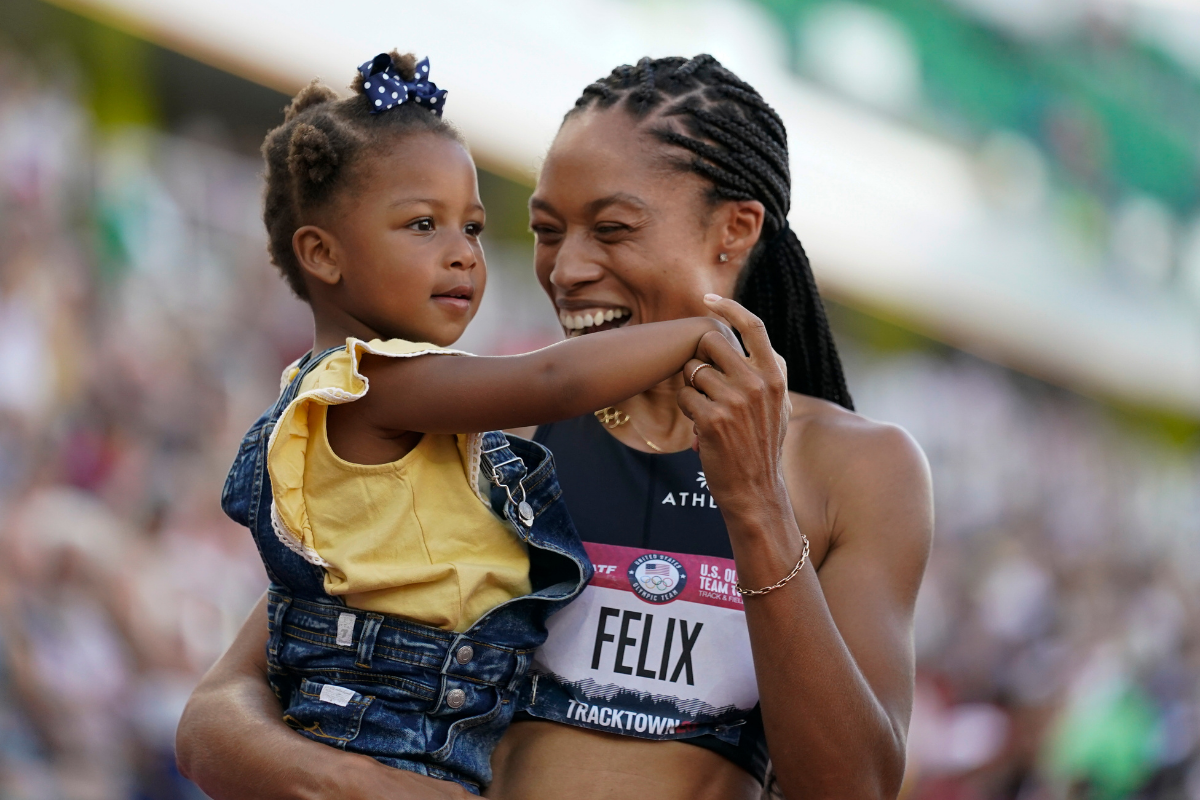 Speed is more than just a measure of distance over time. For gold medalist Olympic champion sprinter Allyson Felix, speed is her livelihood, her career and her legacy. Felix and her husband both were blessed with speed, and it would surprise no one if their young daughter grew up to be a speedster as well.

At 35, the superstar track and field sprinter qualified for her fifth Olympic Games. One of the greatest female Olympic track and field athletes the United States has witnessed, Felix punched her ticket to the 2020 Tokyo Summer Olympics in front of her loving husband and their daughter.

But who is Allyson Felix’s husband? He’s a former track and field athlete as well.

Olympian Allyson Felix is married to Kenneth Ferguson. He is a former hurdler, a recent father and a loving husband.

He cheers Felix on from the bleachers these days, but he used to star on the track himself. Ferguson was a formidable track and field athlete for nearly 10 years, hitting his stride in 2003. At the 2003 Pan American Junior Athletic Championships, he won gold in the 100-meter hurdles, 400-meter hurdles and with his 4×400-m relay team. He also raced collegiately for the South Carolina Gamecocks.

No wonder he wound up with Felix. He was the only one who could keep up with her.

These days, Kenneth faces the familiar hurdles of fatherhood. His wife is in the Olympics once again. Between the Tokyo Olympic Games and his daughter Camryn, Kenneth Ferguson is sure to have his hands full this summer.

Felix’s daughter, Camryn Grace, rushed into this world in November 2018, aided by an emergency C-section for her premature birth.

Camryn’s father, Kenneth Ferguson, was a Pan American Junior Athletics Champion in 2003 and raced collegiately in South Carolina. These days, the family lives in Los Angeles. Though she’s originally from Southern California, the family recently lived in Michigan. Chrysler employed Ferguson at the time, but he took a leave of absence to move back to LA so Felix could train for the Summer Olympics. That’s when the pandemic struck.

Last year’s COVID-19 pandemic was difficult on Felix and Ferguson’s young family. Wanting to protect their young daughter at all costs, Felix took extra precautions in her training with coach Bobby Kersee. As reported in The New York Times, the pandemic had a silver lining for Felix. It afforded her an extra year of recovery after her daughter’s emergency C-section nearly took Felix’s life.

The year paid off. Felix officially qualified for her fifth Olympics in June 2021 after a thrilling 400-meter Olympic trials qualifier in Eugene, Oregon, alongside USA Track and Field members Wadeline Jonathas and Quanera Hayes. When the race was over, Camryn Grace made fast friends with Demetrius Hayes, Quanera’s 2-year-old son.

It was the moment heard around the Internet, precisely what everyone on social media needed to see in times like these.

American track star Allyson Michelle Felix was born and raised in Los Angeles, California. Paul Felix, a minister in Sun Valley, and Marlean Felix, a teacher at local Balboa Magnet Elementary, raised their two children, Allyson and Wes Felix. Both children grew up to be NCAA sprinters for the University of Southern California. Keeping the faith and family, Wesley Felix is his sister’s agent today.

Felix signed a contract with Adidas after high school. Her first USATF Olympic silver medal came at the age of 18 while competing in the 2004 Athens Olympics. She followed her first Olympics performance with a 200-meter gold medal at the World Championships in Helsinki. Since then, she’s won gold in Osaka, Berline, Daegu, Beijing, London and Rio de Janeiro.

In 2021, Felix is tied with Merlene Ottey for the most Olympic medals of any female Olympic athlete in track and field history. She’s won six Olympic gold medals (nine in total), five Jesse Owens Awards and ten national championships. Her specialty is the 200 meters, but Felix is a 100-meter, 400-meter and 400-meter relay champion as well.

Undoubtedly one of the most versatile track athletes of all time, the six-time Olympic gold medalist might be the Usain Bolt of female athletes. She’s even paid like the Bolt: Allyson Felix has a reported net worth estimated at $4.5 million.

Usain might be retired, but Nike and Athleta-sponsored Felix seeks to break her tie with Ottey in 2021. If Felix can earn at least one medal in Tokyo, which seems highly likely, the six-time gold medalist Olympian will officially become the most decorated female track and field star ever.

The competition will be stiff, but Felix has an entire nation behind her. Even better, she has her family behind her.