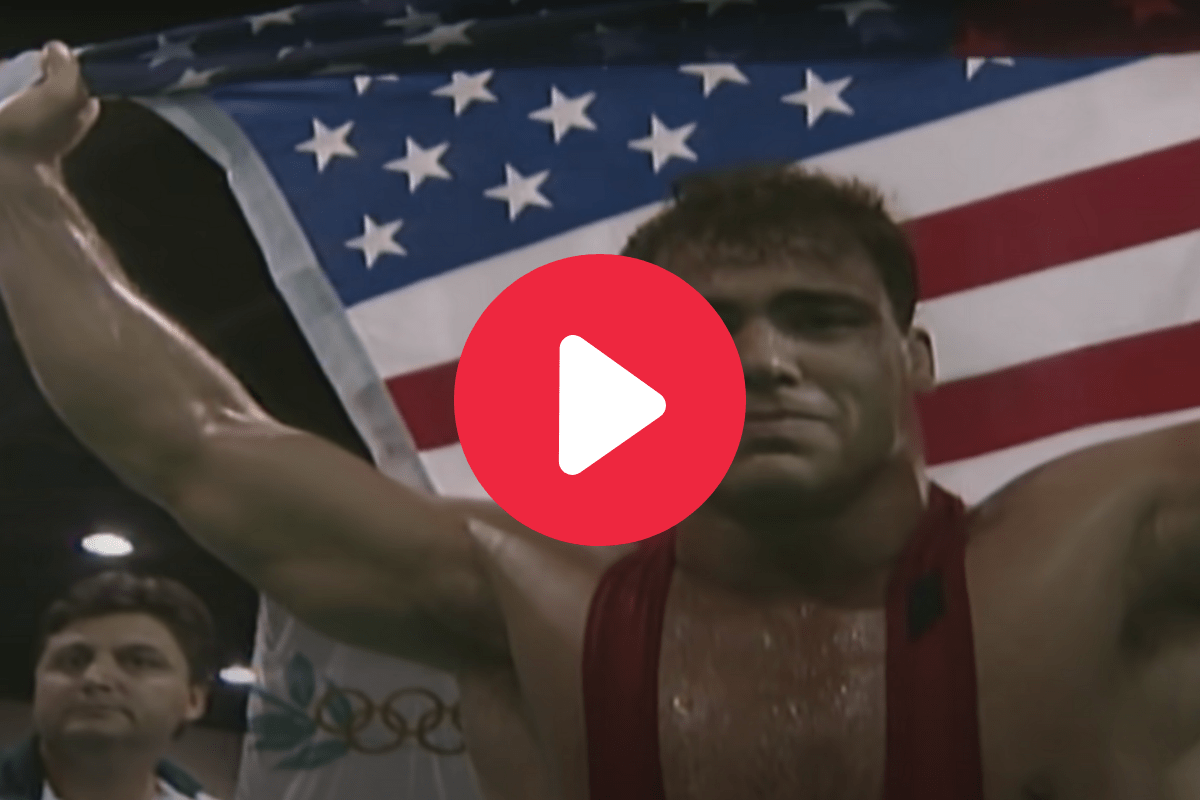 Brock Lesnar. Dwayne “The Rock” Johnson. Stone Cold Steve Austin. All WWE superstar wrestlers who are actual athletes, not just actors. But one athlete-wrestling star rises above the rest. His name is Kurt Angle, and he is a true American hero.

Olympic gold medalist Kurt Angle made a pro wrestling career out of broken necks. From the 1996 Olympics to WrestleMania to RAW to NXT to TNA to SmackDown to Lucha Libre, Angle has been a professional wrestling star for decades. Angle is a Team USA all-time great, complete with his own legendary story.

Before the WWE Hall of Famer took the mic from Vince McMahon, before he stared down Triple H, before he undertook the Undertaker, before he started his own podcast, Kurt Steven Angle was just a kid from Mt. Lebanon Township, a suburb of Pittsburgh.

Angle attended Clarion University in Pennsylvania to wrestle collegiately. He was an All-American and won two NCAA championships before winning gold at the 1995 World Wrestling Championships, held one year before the 1996 Olympics. Angle would wrestle his way to gold in those Olympics with a broken freakin’ neck.

How Kurt Angle Broke His Neck

Kurt really hurt his neck in the above clip, though it was far from his first time. Like most professional athletes, Kurt Angle has a long laundry list of injuries I could mention. But it was a broken neck in the summer of 1996 that made him legendary.

Competing in the national Olympic trials semifinals, Angle was in a pickle. With one minute left in the match, he was down 3-0 and had just broken his neck. He miraculously won 4-3, despite two cracked vertebrae, two bulged and herniated disks and four pulled muscles, all in his neck. The victory helped punch his ticket to Atlanta.

Off the wrestling mat, the broken neck was the least of Angle’s worries. In the January before the games, his coach was murdered by his sponsor.

Angle trained for Atlanta at the Pennsylvanian Foxcatcher Club under coach Dave Schultz, who was a 1984 gold medalist. The club was a multi-million dollar training facility funded by John du Pont. Du Pont was an eccentric millionaire man-child who proved to be dangerous and insane.

In January of 1996, for no logical motive, du Pont murdered Schultz in cold blood. Schultz died in the arms of his wife, Nancy Schultz. Kurt Angle was nearly destroyed by the sudden loss of his coach. He quit du Pont’s Foxcatcher Team, helping start the Dave Schultz Wrestling Club instead.

The murder was highly publicized and well-documented. Aside from the Netflix documentary (trailer above), the tale was turned into a full-length feature film starring Steve Carrell, Channing Tatum and Mark Ruffalo.

Kurt Angle is not depicted in the film, but he was there in real life. What most people call a movie, Angle calls his memories. Heartbroken and inspired by Schultz’s passing, Angle had a near-unhealthy focus on winning gold at the 1996 Atlanta Olympics. Breaking his neck was just another speed bump, one that Angle was sure to roll over.

July 31, 1996: With a broken neck, @RealKurtAngle wins the 100kg freestyle wrestling gold medal 🥇at the Olympics in Atlanta.pic.twitter.com/dv83bYzpCp

Angle breezed through the first two rounds past Mongolia’s Dolgorsürengiin Sumiyaabazar and Cuba’s Wilfredo Morales. His biggest challenge came in the third round against the Ukrainian Sagid Murtazaliev, who was much stronger than Eddie Guerrero. Angle won the match 4-3, moving on to face the Russians in the semifinal. Despite being undersized, Kurt Angle dispatched Konstantin Alexandrov with relative ease, reaching his first and only Olympic wrestling final.

Again undersized against the Iranian Abbas Jadidi, Angle won his gold medal on the judge’s decision after a 1-1 draw. Thrilled, Angle fell to his knees in tears. No, it wasn’t the neck pain. It was the sweet, sweet taste of an incredibly hard-earned victory. After everything the past six months had wrought, Kurt Angle took it all on and won. After finding his mother Jackie Angle in the crowd, also in tears, Kurt proudly stood on the podium, ready to receive his Olympic Gold Medal.

Day 6 Olympic Games:
This week 25 years ago I had the proud opportunity to represent my country in the Olympic Games, where I captured the GOLD! Something I dreamed about since I was 7 years old. Dreams DO come true when you BELIEVE in yourself. #itstrue @usawrestling @olympics pic.twitter.com/yTSOQYsck9

“I’ve worked for this moment all my life. I can’t believe it happened. It’s the best feeling I’ve ever had,” he said an interview after the match. “If I died tonight, I’d be the happiest man in the world.”

Angle’s life was caught in a whirlwind after freestyle wrestling gold. He was on late-night TV, invited to the White House and dubbed a national hero. He became famous, soon joined the WWF and became addicted to painkillers. The consequences of decisions made in 1996 have been far-reaching in Angle’s life, and not all of them are good.

His neck injury led to one neck surgery after the other, but Angle still stands today. The heavyweight has seen more main event cards than John Cena, Hulk Hogan and Ronda Rousey combined, and he’s still going.

Kurt Angle may be 52, but he still looks like he could wrestle.

He married Giovanna Yannotti in 2012. They met on the set of a movie called “End Game” in 2009 they were both acting in. She had no idea who he was at first. Angle had two kids with his ex-wife, Karen Smedley, who he was married to from 1998-2008.

He now spends his days hosting his own podcast called “The Kurt Angle Show” alongside Conrad Thompson. The show recaps his legendary career, including the memorable gold medal moment and his storied time in the ring.

Angle is in “extreme pain” every day, however.

?I work on my body a good 2-3 hours a day. I have to. I?m so banged up now. I sacrificed a lot of my body in professional wrestling, and amateur wrestling. I have to blame both sports, not just one. I?m paying for it now, but I?m managing it,” he said in a Q&A in 2021.

“I had a painkiller problem, and I kicked that eight years ago. Not having painkillers anymore is really difficult, but I?m never going back to those, nor do I want to.”

Kurt Angle is an American legend, on par with Paul Bunyon or Randy Orton. When you win a gold medal with a broken freakin’ neck, you’re guaranteed a spot in the Hall of Fame.

MORE: Kerri Strug Stuck the Landing 25 Years Ago, But Where Is She Now?