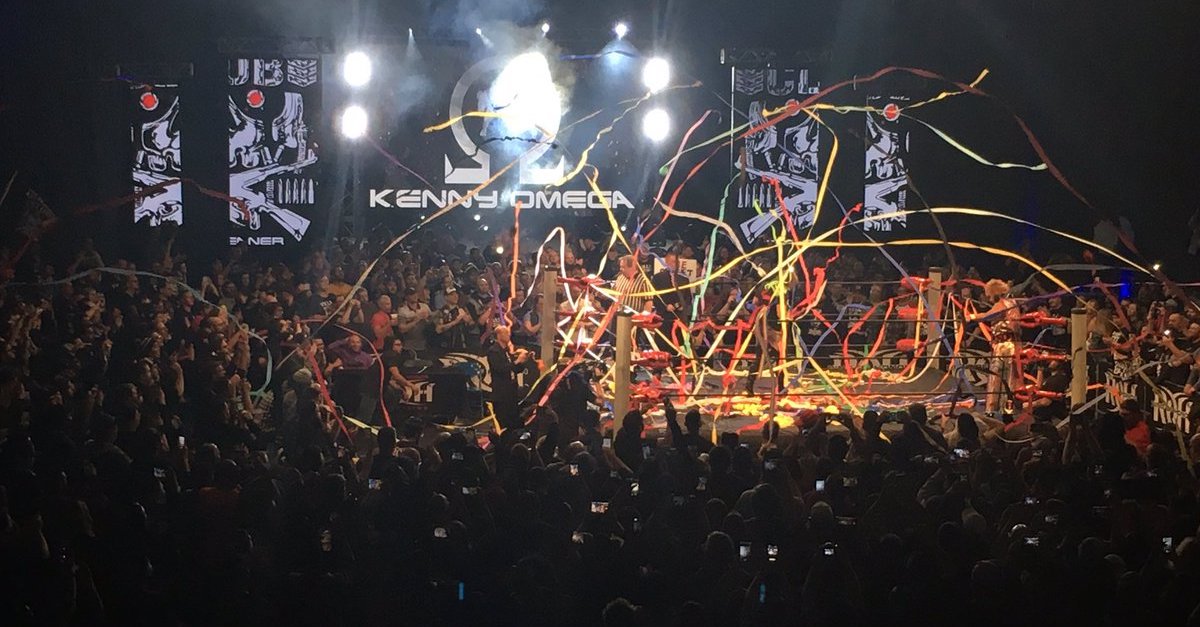 Omega and Yoshi-Hashi battled around the ring. The champ pulled out a table and set it up on the barricade. Yoshi-Hashi reversed and suplexed Omega on the padding outside the ring.

Omega hit a running bulldog for the two-count. Yoshi-Hashi started his comeback, connecting on a suplex neckbreaker. Yoshi-Hashi hit a frankensteiner, knocking Omega out of the ring. The champ gained the advantage on the outside and hit a running powerbomb through the table.

Omega set up Yoshi-Hashi in electric chair position, but the challenger reversed into a DDT. He connected on a powerbomb into flip over pin, but Omega kicked out at two. Ref bump opened the door for shenanigans, and the Bullet Club was quick to oblige.

Marty Scurll set Yoshi-Hashi for a super kick, but Omega saved him. He called out the rest of the Bullet Club and requested 10 boots. Yoshi-Hashi reversed into a backstabber, and he called for 10 boots from New Japan and Ring of Honor wrestlers.

Omega finally hit Yoshi-Hashi into the boots, connected on a powerbomb, then hit a running knee into Yoshi-Hashi’s head. Omega hit the one-winged angel, but Yano pulled the ref out of the ring.

A chaotic last fed minutes resulted in everyone at ringside joining in on the fight, including Nick Jackson connecting on a 450-splash, putting Flip Gordon through a table.

Yoshi-Hashi pulled Omega back in the ring and missed on a Swanton Bomb. Omega pulled the knee pad down and connected on Yoshi-Hashi. He hit another one-winged angel for the pinfall.

After the match. Cody said wrestling has never been cooler.

The Bullet Club said they needed to take a selfie, and they pulled Jimmy Jacobs out of the crowd, who was reportedly fired for doing that exact thing less than a month ago.

Flip and Ospreay was exactly what you’d expect between the two, an incredible show of athleticism.

Gordon and Ospreay traded stunners to a knocked out stalemate and the crowd gave them a standing ovation.

Ospreay reversed the Os-Cutter and hit the 450 splash for the two-count. Ospreay hung Gordon on the top rope and hit a sunset flip. He then connected on the Os-Cutter for the pinfall victory. Unreal match.

Shane Taylor announced he was taking the place of the injured Mark Briscoe to battle Suzuki and the Killer Elite Squad.

Suzuki went to the outside and blasted King with a chair early. The six men brawled, but finally the ref was able to get order of the ring. Lethal and Suzuki squared off, with the duo exchanging slaps.

Lethal and Suzuki quieted the crowd to exchange chest slaps, with the latter dropping the former champ to his knees with a brutal slap.

Suzuki battled off Taylor, connecting on the piledriver for the pinfall win.

Search and Destroy got an early advantage, and posed with the Too Sweet symbol in the ring as the Bullet Club recovered. Search and Destroy continued playing up the bad guys, as Shelley spit on Nick Jackson. Shelley and Sabin took out Cody and Matt Jackson before Nick Jackson made the hot tag to Adam Page.

All hell broke loose as Cody, the Bucks and the other five competitors all went attacked each other before they were all laid out. Back in the ring Page and the Bucks hit sharpshooters, with Jay White putting one on Cody. The Bucks and Page realized what was happening and super kicked White, allowing the four to lock in sharpshooters in unison.

Matt Jackson hit the Indytaker on the outside, Cody hit the Cross Rhodes on White and Page connected on Rite of Passage on Gresham for the win.

Scurll grounded Takahashi early and floated around the ring. Takahashi reversed Scurll off the ropes and mocked the Villain. The action turned to the outside, where Takahashi pelted away at Scurll’s chest and threw him into the barricade.

Scurll reversed action inside the ring, then brought Daryl into the ring, twisting his arm. He then hit Takahashi with Daryl for the two-count.

After plenty of back-and-forth action, Takahashi connected on a front throw of Scurll into the turnbuckle. Scurll picked up Daryl to stop Takahashi’s running attack, then tried to pick up a dirty win by pinning him with his feet on the ropes. Takahashi attempted the same on the other side of the ring and both wrestlers backed the ref into the corner, yelling at him.

Ring of Honor Global Wars Best of the Rest: