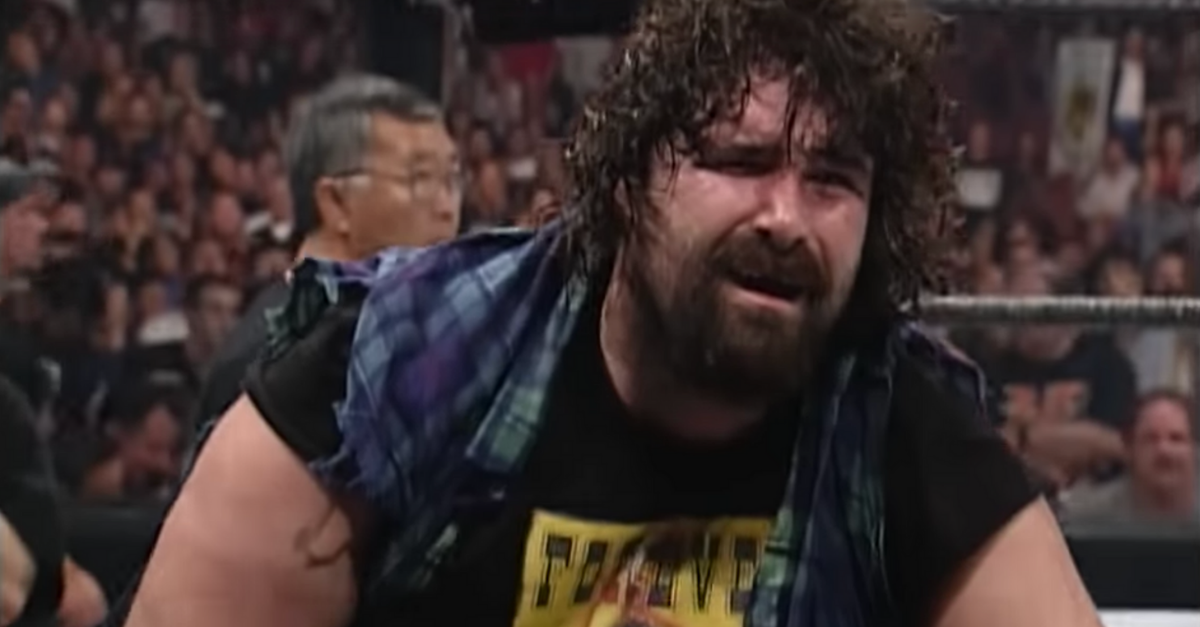 WWF WrestleMania 16, also known as WWF WrestleMania 2000, is certain splits the votes as far as viewer approval. The event, held at the Arrowhead Pond in Anaheim, California, was headlined by a Fatal Four Way match. Triple H defending his WWE Championship against The Big Show, The Rock, and Mick Foley.

WrestleMania 2000 was truly a one-of-a-kind due to none of the matches being a regular singles match.

What Happened at WrestleMania 2000?

The event started off with Ice-T coming down rapping The Godfather’s “Pimpin Ain’t Easy” song and accompanied by D’Lo Brown. The duo competed against The Big Bossman and Bull Buchanan. Although the babyfaces came out to an elaborate entrance, they were not about to defeat Bossman and Buchanan.

Al Snow & Steve Blackman, better known as Head Cheese, competed next against T&A (Test & Albert) with Trish Stratus. This match ended with Head Cheese taking the loss, although the team was very popular despite basically happening on the fly and gaining a great deal of support as the weeks progressed. As a fan watching this, I was glad that this team reached a point of having a match on the WrestleMania card. Although it was weird when the team first happening, they became a hilarious case of strange bedfellows.

Although it was not officially consider a “TLC” match yet, we saw an amazing triple-threat tag team match between Edge & Christian, Matt & Jeff Hardy (The Hardy Boyz), and The Dudley Boyz (Bubba Ray and D-Von). This one, the first of three, was called a Triangle Ladder Match.

The next match was a catfight between The Kat and Terri Runnels with Val Venis as the special guest referee. Unfortunately, this was the representation of the women’s match at the pay-per-view. Thankfully, Chyna teamed up with Too Cool (Scotty 2 Hotty & Grandmaster Sexay) in the following match to defeat The Radicalz (Dean Malenko, Eddie Guerrero, and Perry Saturn).

Following this match was my personal favorite. Kurt Angle, who held both the Intercontinental Championship and the European Championship, had to defeat both titles in a two-out-of-three falls triple threat match, including fellow WWE superstars Chris Jericho and Chris Benoit. The first match was for the Intercontinental title, which was won by Benoit. The second was for the European title, which was won by Jericho.

The main event was Triple H, who came in with the WWF Championship, defending the title against Mick Foley, and Royal Rumble winners The Rock and The Big Show. Watching, this match, I was expecting a babyface to win, since that was a traditional ending to the PPV every year.

Shockingly, Triple H was able to weasel his way into leaving the match with a victory against The Rock at the conclusion of the four-way elimination match.

Overall, I enjoyed the event, and generally do not agree with the criticisms. Although the women’s match was probably the worst part of the show, the face-paced feel of the event made it intriguing to watch. For those who have not watched WrestleMania 2000, I would recommend it from the standpoint of the gamut of gimmicks involved made it fun to watch.