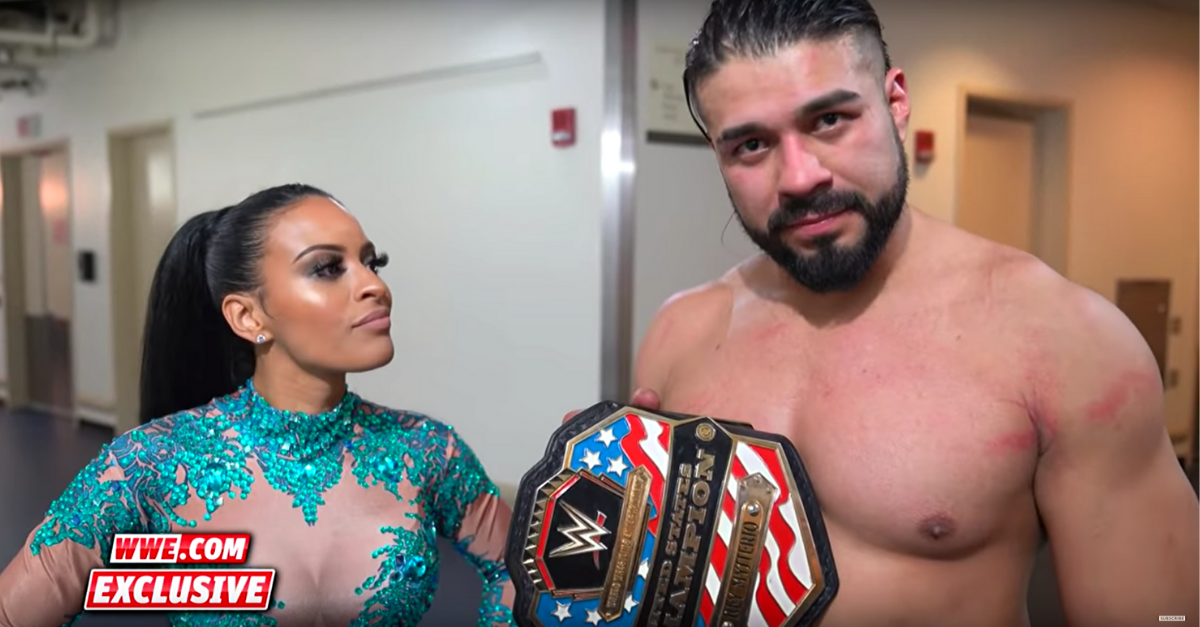 United States Champion Andrade is now sitting on the sidelines due to a 30-day suspension as a result of violating the wellness policy. As announced on the WWE.com website, “WWE has suspended Andrade (Manuel Oropeza) for 30 days effective immediately for a first violation of the company’s talent wellness policy.”

To write him off of television, Humberto Carrillo executed the Hammerlock DDT, one of Andrade’s signature moves, on the concrete floor on an episode of WWE Raw. However, Andrade did not lose the title, due to reportedly Paul Heyman not wanting to take it off of him so soon. Since he is one of Heyman’s highly-viewed wrestlers, the company did not want to stop the momentum he received after defeating Rey Mysterio to win the title on December 26.

Andrade officially made his pro wrestling debut in 2007, competing for the CMLL promotion under the name Brillante. Just a few months later, the Gomez Palacio, Durango, Mexico native became La Sombra, and won the NWA World Welterweight Championship in November of his debut year. He retained the title for 547 days before losing it in 2009. Andrade remained in CMLL as La Sombra until 2015, also winning the promotion’s trios championship. Also during this time, he competed for New Japan Pro Wrestling in the 2011 G1 Climax. He also defeated Shinsuke Nakamura for the IWGP Intercontinental Championship in a Best-2-Out-of-3 falls match during a 2013 CMLL television show, before losing to Nakamura two months later at NJPW Kizuna Road.

Oropeza made his NXT debut in January of 2016 as Manny Andrade, defeating Riddick Moss. He competed on NXT live events before making his television debut match as Andrade Cien Almas at NXT TakeOver: The End against Tye Dillinger. Andrade Almas continued to be a mainstay on NXT, having championship opportunities, but his career propelled when he turned heel on Cedric Alexander, and eventually acquired Zelina Vega as his business manager.

Following the WrestleMania pay-per-view, the WWE stars were a part of a superstar shakeup, and Andrade made his main roster debut by being drafted to the WWE SmackDown Live brand. This was expected, as Andrade had an impressive showing among the 30 wrestlers in the match at the 2019 WWE Royal Rumble pay-per-view.

On SmackDown, “El Idolo” had start-stop momentum, competing in a mixed tag team with Zelina Vega against John Cena and Becky Lynch, as well as defeating Finn Balor, Ali, and Randy Orton in a Fatal Four Way match. However, while competing for the blue brand, he racked up losses against Rusev, Daniel Bryan, Rey Mysterio, AJ Styles, and Apollo Crews, among others.

Andrade was moved to the Raw brand to refresh his character, and it fared well for him. Aside from being in high-profile matches with names such as Seth Rollins and Aleister Black, he was able to become the number one contender for the U.S. title by defeating Matt Hardy, Ricochet, Akira Tozawa, R-Truth, and Humberto Carrillo in a gauntlet match. He was able to successfully cash-in on his title match, as he defeated Mysterio at Madison Square Garden to win the U.S. Championship.

Andrade recently became engaged to Charlotte Flair, who he has been dating for over a year. The two are among several WWE superstars romantically involved with each other. Others include Seth Rollins dating Becky Lynch, Rusev married to Lana, Montez Ford married to Bianca Belair, Jimmy Uso married to Naomi, and Raymond Rowe married to Sarah Logan.