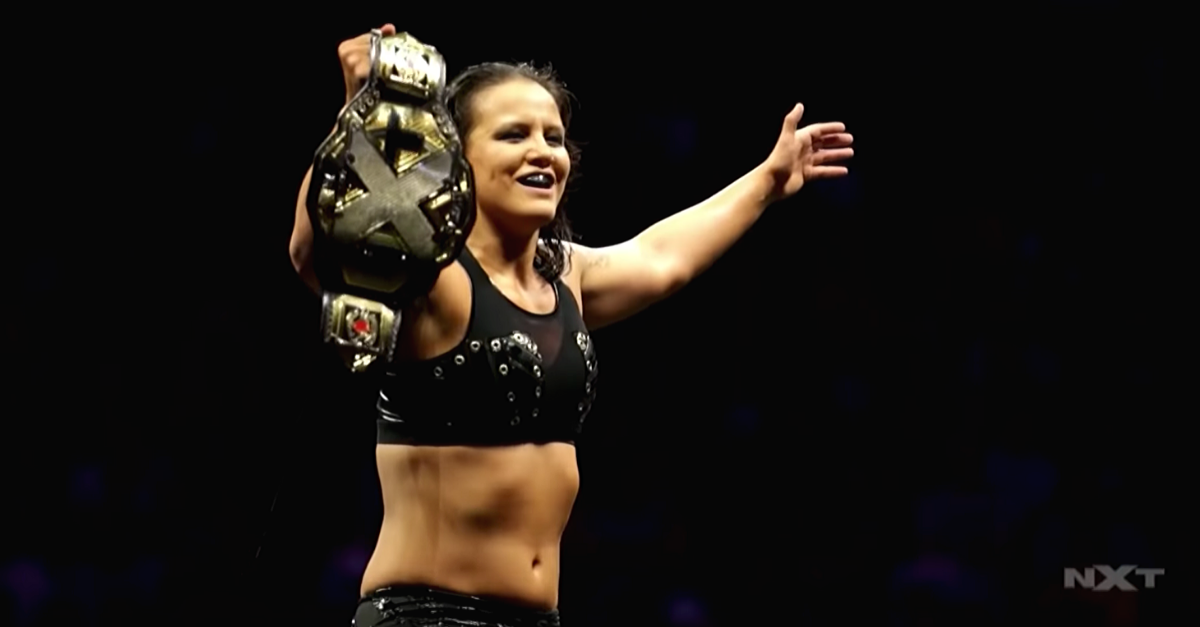 On the December 18, 2019 episode of NXT, the show closed with the NXT Women’s Championship match between Shayna Baszler and Rhea Ripley. After being one of the hottest talents over the previous several weeks, even capturing wins for her team at both NXT TakeOver: War Games as well as Survivor Series, Ripley capitalized on this momentum en route to becoming NXT Women’s Champion for the first time. Ripley previously had a reign as WWE UK Women’s Champion as well.

With Ripley’s win, this ended one of the most dominant title reigns, not only in the history of the women’s division, but in all of pro wrestling. In fact, Baszler’s latest reign lasted 416 days, with her first one lasting 132 days after defeating Ember Moon. Her total of 548 days makes her the longest-reigning NXT Women’s Champion in history passing the 522 days of Asuka holding the women’s title.

Here is a look back at the 416-day reign of Shayna Baszler.

Baszler began her most recent championship reign at the all-women’s WWE Evolution event by defeating Kairi Sane on October 28, 2018. Three weeks later, at NXT TakeOver: War Games II, Baszler retained the title in a rematch against Sane in a two-out-of-three falls match.

After a short feud with Dakota Kai, Baszler’s next big opposition was Bianca Belair, who went into their match at NXT TakeOver: Phoenix undefeated, and with a ton of momentum heading into Royal Rumble weekend. Despite being a valiant contender for the championship, Belair was unable to defeat Baszler, and her streak ended. Belair did not give up on her quest to become champion, and actually was able to one-up Baszler by winning a six-women tag match. Belair teamed with Kairi Sane and Io Shirai to defeat Baszler, Jessamyn Duke, and Marina Shafir, on the January 30, 2019 episode of NXT.

Heading into WrestleMania weekend at NXT TakeOver: New York, Baszler had three title contenders to fend off, as a four-way match was set for her women’s title. In spite of very close calls from each of the opponents, Baszler forced Belair to tap out, continuing her title reign.

The next major feud was Io Shirai, who had an opportunity to win the NXT Women’s Championship at NXT TakeOver: XXV. Shirai failed to become champion at TakeOver, but had another chance to win on an episode on NXT, as she competed against Baszler in a cage match. Still, Baszler continued her dominance, as Shirai was unable to become champion.

Frustrated at the inability to defeat Baszler, Shirai turned on her friend, Candice Lerae, and became a heel for the first time in NXT.

Mia Yim become the next opponent for Baszler’s NXT women’s title, competing against the champion at NXT TakeOver: Toronto during SummerSlam weekend. Despite a valiant effort, Yim became the next person unable to defeat Baszler, continuing the champion’s dominant run. Candice Lerae also had a shot at becoming champion on an episode of NXT TV, but became just another victim of Baszler’s reign of dominance.

As Survivor Series was on the horizon, Baszler set her sights on feuding with Becky Lynch and Bayley for brand dominance. While doing this, Baszler was also in an intense rivalry with Rhea Ripley, which led to a four-on-four War Games match.

At NXT TakeOver: War Games III, Ripley ? along with Candice Lerae ? was able to defeat Baszler and her teammates, Bianca Belair, Io Shirai, and Kay Lee Ray. Dakota Kai and Tegan Nox were also on Ripley’s team, but Kai turned on Nox and injured her, eliminating both of them from the match. The next night, however, Baszler surprisingly was able to defeat WWE Raw Women’s Champion Becky Lynch and WWE SmackDown Women’s Champion Bayley in the triple threat main event, using her MMA training to force Bayley to submit in the non-title match.

Is a Transition to Raw or SmackDown Coming?

The Queen of Spades accumulated her reign to 14 months, before defending her title against Ripley on the USA Network. Baszler’s lost to Ripley has built major speculation of potentially moving to the main roster.

With WrestleMania coming up in a few months, could a WWE vs. MMA Four Horsewomen feud be brewing? Currently, Ronda Rousey is still away from the company, while Bayley and Sasha Banks are two of the biggest heels on the SmackDown brand. While this match has been heavily discussed for quite some time, it is very doubtful that Shafir and Duke will be called up yet for such a marquee feud at the biggest stage of the year.