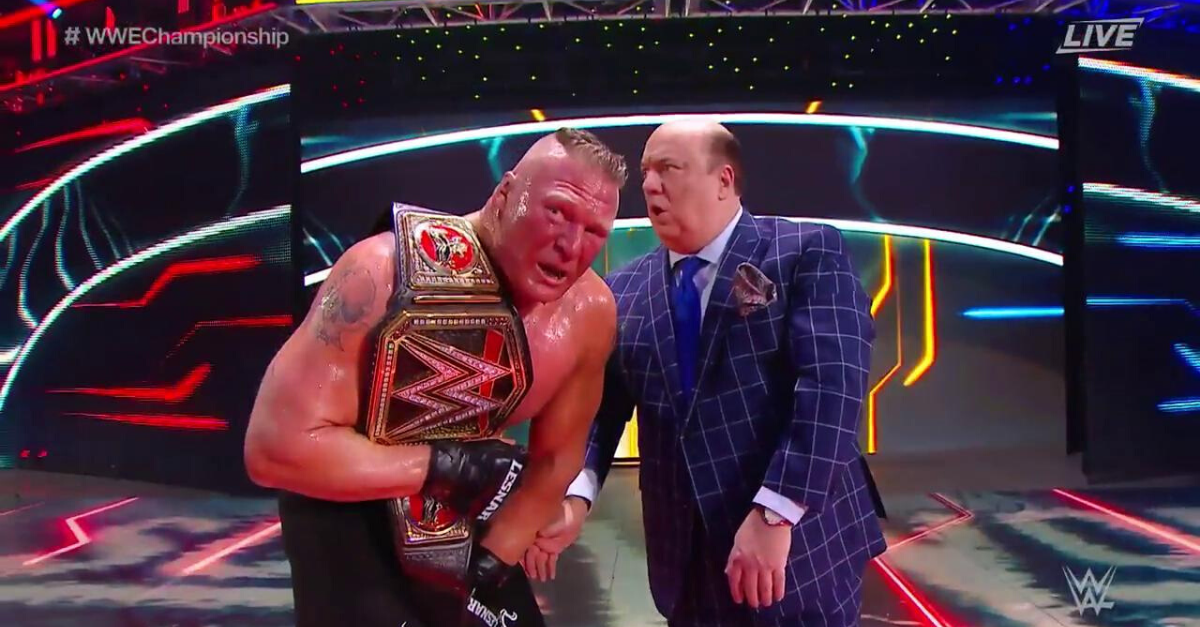 WWE Survivor Series was the third night of the four-night stop at the Allstate Arena in Rosemont, Illinois. In the fight for brand supremacy, Team Raw and Team SmackDown were defeated by Team NXT. Clearly, the Wednesday Night War with NXT was the motivator for this event, as NXT finally defeated AEW in the ratings after eight weeks of head-to-head competition. NXT scored four wins, while Raw scored one and SmackDown scored two.

In addition to the brand competition, the top championship for each brand was at stake in singles matches. Based on the kickoff show and main show matches, here is the list of matches from worst to best.

This match was the only bout that Raw won. However, it was the most forgettable match of the night. Robert Roode and Dolph Ziggler won the battle royal, and the reaction was flat. The other teams in the match were the Street Profits, Lucha House Party, The OC, Heavy Machinery, The Forgotten Sons, Breezango, The Revival, Imperium, and Curt Hawkins & Zack Ryder. The Street Profits should have won the match to give the event an exciting start.

Although the match was fun to watch, it was predictable, as the Cruiserweight Championship is now exclusive to NXT. For Akira Tozawa or Kalisto to win the match, they would have been forced to defect to the NXT brand. The Cruiserweight title being featured on NXT has certainly helped the interest of it, especially since Lio Rush and Angel Garza built a storyline around it. However, the interest is going to need to improve for it to be a top match of the night.

At this point, it was already impossible for either Raw or SmackDown to win, as the best that could have happened was Raw having a 3-3 tie with NXT. This was a very odd call to be a main event match, and it took the PPV down a few notches with NXT Women’s Champion Shayna Baszler winning. The anticlimactic finish of Baszler forcing Smackdown Women’s Champion Bayley to tap out was mirrored by the audience, and it seemed like Raw Women’s Champion Becky Lynch had to do the double legdrop through the table on Baszler to continue to make herself look good, as well as draw some kind of positive reaction to end the night.

Reportedly, even Vince McMahon was unhappy with this match ending the show.

7. Viking Raiders vs. The New Day vs. The Undisputed Era

This was another match that was fun to watch, but the lack of much to be excited about other than “brand supremacy” made this triple threat tag team match have little stock in overall storytelling. The actual match was above average, but it was predictable that the Viking Raiders team of Erik and Ivar were going to win. Other than that, all three teams looked good, and there were some fun moments to watch.

There were several awkward spots in this match. In addition to numerous miscues, some superstars were just outright sloppy. The best part of this match was putting a spotlight on Bianca Belair, and especially Rhea Ripley. Both Belair and Ripley looked like main roster stars and would be very interesting opponents flr Charlotte Flair. Asuka spraying Charlotte with the green mist made sense, as she is a heel, as well as it protects Charlotte from getting a clean loss (although Charlotte, at this point, needs to be focused on making other people look good).

While adding Toni Storm to the NXT team was a good way of gaining some exposure, she did not contribute much to the match. Carmella was also overshadowed, with the exception of standing in between the Io Shirai and Kairi Sane staredown. Io Shirai shined more on NXT TakeOver: WarGames, although she did look good at Survivor Series. Candice Lerae was overshadowed, while Dana Brooke and Sarah Logan just seemed out of place. Sasha Banks and Natalya held their own, but it was clear that NXT was going to win when they were the last two for their respective teams.

This match was good from the standpoint of fans getting behind Daniel Bryan, but the way WWE is booking “The Fiend’ Bray Wyatt is just weird. He sold way more than he did when he competed against Seth Rollins, and Rollins used ladders, chairs, a sledgehammer, and travel cases. This match was clearly just a filler for The Fiend to continue to be dominant on SmackDown. However, it makes any upcoming feud very odd if he continues to no-sell the way he does. The mandible claw finish for Bray is suitable for his character, but it was weird that he gained a pinfall victory from it.

While there are rumors circulating of who Bray’s WrestleMania opponent will be, seeing how he is expected to retain Universal Champion at least until then, Braun Strowman would be a good name to win the Royal Rumble elimination match and challenge The Fiend for the title at WrestleMania 36.

GENIUS, GENIUS, GENIUS!@roderickstrong pins @ShinsukeN to give #WWENXT its THIRD victory of the night at #SurvivorSeries! pic.twitter.com/etU8rtfHoD

This was a good match, but it was a bit odd that NXT North American Champion Roderick Strong won. However, Strong made it appear that he used United States Champion AJ Styles to knockout Intercontinental Champion Shinsuke Nakamura with the Phenomenal Forearm, so winning like that made sense and did not really hurt the other champions. Strong received the least crowd response, but this match further made it seem as if NXT would continue to rack up points throughout the night. In the ring, though, this was the best triple threat match of the next from the standpoint of individual competitors.

NXT continued to showcase the talent depth of the brand as a result of this title match between Adam Cole and Pete Dunne. Mauro nicknamed Cole “Mr. November” at NXT TakeOver: WarGames, due to his impressive win against Daniel Bryan on the SmackDown following Crown Jewel, as well as participating in both the WarGames match and defending the NXT Championship at Survivor Series.

Cole winning the match was expected, but not without close calls from Dunne hitting the Bitter End and his cross armbar. Despite Dunne’s valiant effort, Cole hit the Panama Sunrise, followed by the Last Shot for the win.

This will NOT be the last time we see @WWERomanReigns and @RealKeithLee in the same ring.

It was MUST-WIN for #SmackDown, and #TheBigDog made it happen! #SurvivorSeries pic.twitter.com/nh2tTt7swg

This match was perhaps the best showing of NXT from the standpoint of making names look like stars. The end of the match was Roman Reigns giving a spear to Keith Lee, who was the last person standing on Team NXT. Lee gave respect to Reigns following the match, and Reigns returned the favor. Lee was made to look like a main-eventer in this match, and fans were totally behind him. Making him the last member of the NXT group, even having team captain Tommaso Ciampa getting pinned by Seth Rollins, shows that Vince McMahon sees something him.

Matt Riddle pinning Randy Orton was surprising, as well as Keith Lee taking out Seth Rollins. Names such as Ricochet, Damian Priest, Shorty G, and Mustafa Ali were mostly overshadowed. WALTER, although he had a good few minutes with Braun Strowman and Drew McIntyre, was widely felt by spectators to be eliminated too soon. Kevin Owens had a few moments, but was much better featured on WarGames. Although Reigns received boos during spots of the match, especially the attempted assisted powerbomb spot with Rollins, his win garnered a very positive ovation from the Chicago crowd. King Corbin being such a hated heel made Reigns look good, especially when Reigns indirectly assisted Ciampa in eliminating him.

This match should have been the main event. Along with a storyline that has been built for several weeks, Paul Heyman executed a good promo in the WWE Raw heading into Survivor Series, coining the match as “Miracle, or Massacre.” Even the storytelling within the match fit the build, with Rey and Dominick hitting the dual 619, followed by the top rope frog splash from each as well.

This was the time where it seemed like Mysterio was going to win, but Lesnar kicking out basically sealed the deal of what the result of this match was going to be. Lesnar limping out of the ring made Rey and Dominick look like formidable competition, which made the match even better overall.