NXT’s Keith Lee is On the Rise, With WrestleMania Dreams to Face Brock Lesnar 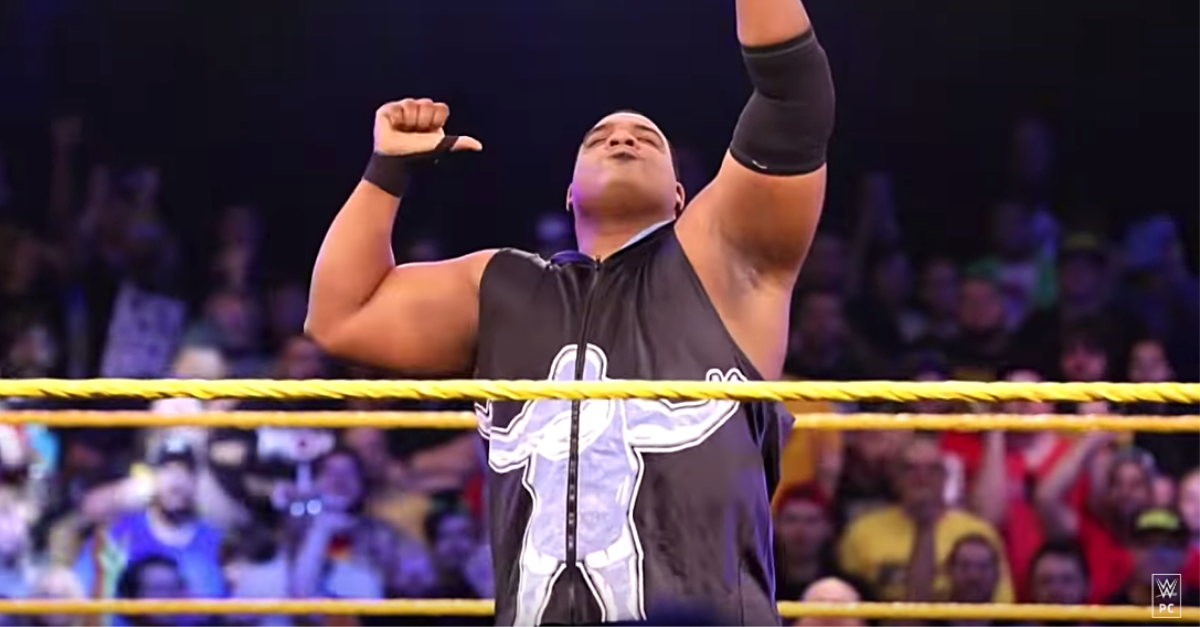 Over the past few years, Keith Lee has been one of the most impressive competitors in all of pro wrestling. Despite his 6-foot-2 and 320-pound frame, Lee has the cat-like agility of a cruiserweight, which is very captivating to the audience. On NXT, Keith Lee competed against Dominik Dijakovic in their fourth in-ring encounter while competing for the brand to determine who would be the top contender for Roderick Strong’s NXT North American Championship. Strong interfered in the match, thinking that neither would be the #1 contender. However, NXT General Manager William Regal thwarted Strong’s plans, and the match will now be a triple threat for the title.

For those who have followed Lee outside of his WWE tenure, him finally getting to be showcased in a dominating matter is long overdue. For a wrestler his stature, the Wichita Falls, Texas native should not have been booked the way he has since joining the black and yellow brand. After a short, but very successful, career with the EVOLVE/WWN promotion, even becoming WWN Champion, Lee made his official NXT debut in 2018, winning a series of live event matches. However, he did rack up some losses to names such as Lars Sullivan and Kassius Ohno (Chris Hero) on the WWE Network NXT TV episodes, not really having an opportunity to gain steam.

However, his feud with Dominik Dijakovic (fka Donovan Dijak) gave Lee a chance to build momentum in NXT, as well as the spectating audience at Full Sail and at home. One of the major reasons why the Lee vs. Dijakovic matches have been so amazing is due to their chemistry being built from their time on the indie circuit. In fact, Lee stated during my 2017 interview with him on the Pancakes and Powerslams Show that some of his top matches were against Matt Riddle, but his favorite match was against Dijakovic while they were competing for the AAW promotion. “It was a mixture of great things,” Lee stated.

Although trained by Killer Tim Brooks, Lee also explained to me that his versatility in the ring and ability to adapt to whoever he is competing against was inspired by William Regal and the late WWE Hall of Famer Dusty Rhodes.

“Everybody else wanted a big man that wrestles out of me. And it just didn’t feel good to me. But, the variety, the versatility, that is naturally me. That is what I’ve always been. In any sport that I’ve played, I’ve been able to do multiple things, take care of multiple jobs, and play multiple positions. So, to me, it only felt right in wrestling for me to display that, and for that to be something that I exude in the ring because that’s who I am. And so, being me is what’s caused this explosion in wrestling, and people appreciate it, and they embrace it. And, it feels good, because it’s just me because me. So, it’s a special thing.”

Prior to WWE NXT and EVOLVE, Lee’s first professional wrestling exposure of a bigger promotion came from his stint in Ring of Honor (ROH), as he commenced a tag team with Shane Taylor. Known as “Limitless” Keith Lee, he and Shane were dominant as a team, having an intense feud with War Machine (currently known as The Viking Raiders), but they never achieved tag team gold.

Along with his success in EVOLVE, Lee has also been VIP Heavyweight Champion, PWG World Champion, as well as a top name for other indie promotions.

Now, his career as a professional wrestler is continuing to gain momentum, gaining NXT victories over names such as Austin Theory, Kona Reeves, Marcel Barthel, and Bobby Fish. Although unsuccessful, he also earned opportunities to compete for the NXT Championship against Adam Cole at live events.

At the 2018 WrestleMania Axxess event, he successfully defended the WWN Championship against Kassius Ohno. Now, he has an opportunity to continue to climb up the ladder to earn an opportunity to compete on the main stage. During my interview with him, Keith Lee vs. Brock Lesnar or Keith Lee vs. Samoa Joe are two of his WrestleMania dream matches. With a theme song telling others to “bask in my glory,” Keith Lee can easily be built as a top star on the main roster.

On the main roster, a United States Championship feud with AJ Styles would be a great fresh rivalry. However, winning the North American and NXT Championships would be a good first goal for the 300-plus pound big man.

Being showcased on NXT TakeOver would be a great opportunity for Lee. Since he is officially in the North American Championship picture, winning that title would be a great addition to his resume, and it seems clear that WWE will keep him in good positions to keep him away from signing with AEW, or even returning to his old stomping grounds such as Beyond Wrestling and Inspire Pro Wrestling.