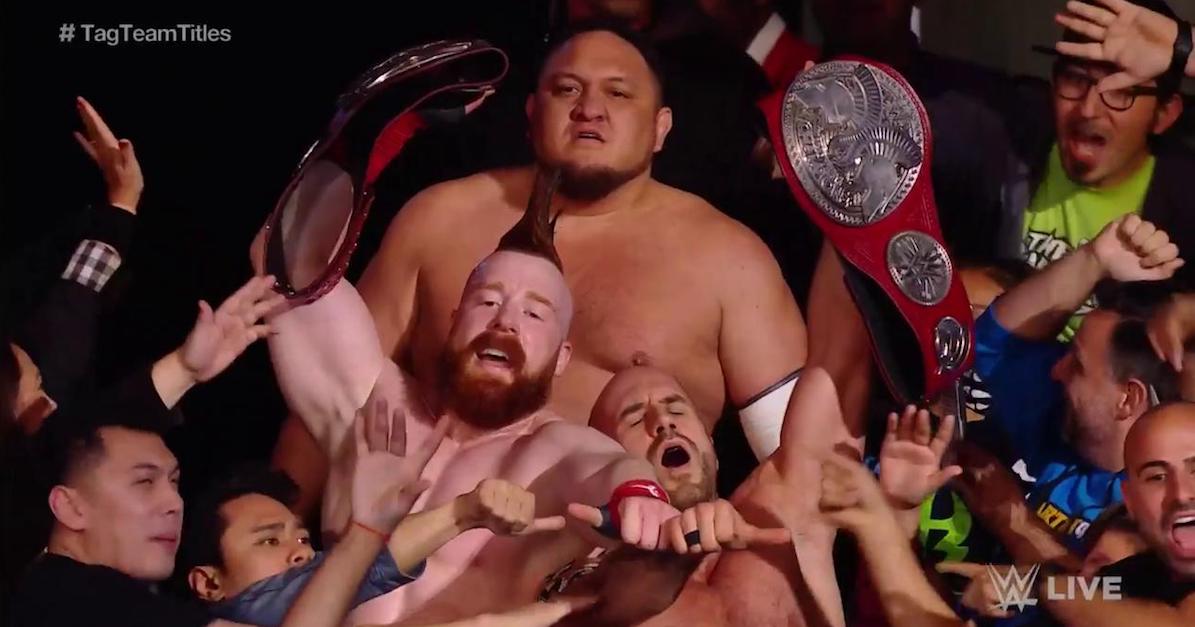 We’ve seen The Bar and The Shield go at it for the final half of 2017 and every single time they’ve gone against each other it’s been fantastic. Their latest chapter was just as good. After a great match, it had appeared that Sheamus had DQ’d his team for not listening to the official when he was attacking Dean Ambrose.

As The Bar was walking out with their titles, Kurt Angle came out and restarted the match to make it a no-DQ which would have you thinking that The Shield would come out triumphant but that did NOT happen. Samoa Joe came out to take out Rollins, but then Roman Reigns came out and went after Joe. Joe escaped and due to the distraction, Sheamus got the pin and The Bar retained the title.

We’re going to have an eventual six-man tag with Joe and The Bar facing The Shield and I’m all for it. Monday night was a big step in making that happen.

This match stems from an opening segment where we see Jason Jordan go nuclear and go after both Roman Reigns and Samoa Joe, even giving Roman Reigns a suplex (sigh) out of nowhere! Basically, Jason wants his “Dad” Kurt Angle to give him a shot at the title and even before Jason can state his case, the Los Angeles crowd is putting heat on Jordan (slowly building the heel turn).

The match actually wasn’t that bad! It went three segments with each competitor getting some offense in. As Samoa Joe sat a ringside, Reigns took it to the clearly injured Jordan but despite the injury, Jordan got some offense in and actually had the advantage coming back from a commercial. Roman would go on to win the match and after the match, Joe attempted to attack Roman but Jordan would take out Joe with a suplex. Later on in the night, as Jason was talking to Kurt we see Joe barrel through the office to take out Jason with a shoulder right into the chest.

For the first time in over a year, we see Paige in the ring and along with “The Boss” put on a great match. It’s becoming more clear that they are pushing the Paige-led “Absolution” group and pushing us towards an Alexa Bliss-Paige program.

Later in the night, Absolution returns after Asuka defeated Alicia Fox but before that, we see Asuka back away from the dangerous trio. Who’s side is Asuka on??

So, Elias tells Kurt Angle that he wants a match on Raw. An already moody Angle decides to grant the singing superstar his wish by giving him Braun Strowman. Before the match, Strowman and Elias attack each other in which Elias hits Strowman with a guitar, which Braun no-sells (it was awesome) and Braun uses steel steps to take out the songbird of Monday Night Raw.

As that happens, Kane’s music pops up on the screen and says that he’s ready to face Braun in the ring finally. So next week it is going to be Braun Strowman vs. Kane in a good old-fashioned hoss off.

Next week I walk through fire and brimstone to dine in hell. #Raw

In what started out as a typical Bray Wyatt promo went left or went “woke” rather quickly.

This feud should’ve happened in 2016 and it took us 12 months into 2017 but we’re finally here. This is going to be so entertaining. The pre-taped video was simply a mashup of Wyatt and Hardy talking in their usual strange cadences and the LA crowd just popped for it. Great stuff!

most girls? Nah.. ALL girls wanna be with a champion … #HowYouDoin? 😏