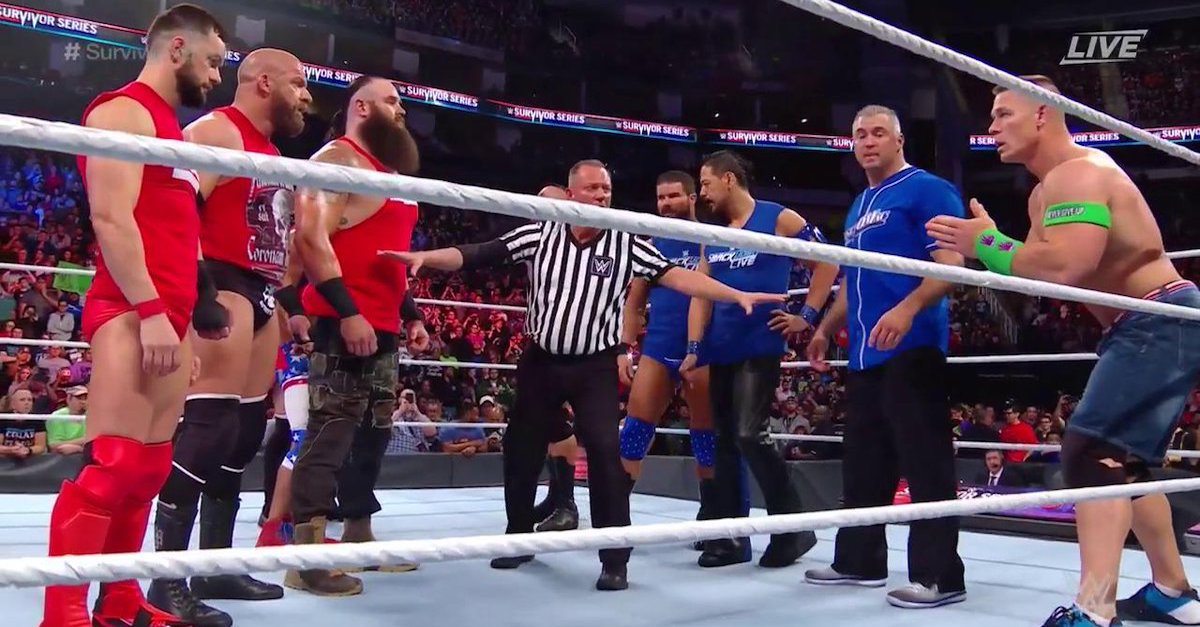 As for the match, it seemed like we’ve got introductions to everybody in the match with the showmanship. We got fun matchups like Nakamura vs. Triple H and Bobby Roode vs. Triple H.

Then we have the breakdown with Team Raw, guys arguing and brawls around the ring. Eventually, we have a Randy/Cena duo teaming up on Braun Strowman

After Sami and Kevin interfere we see a huge schmoz that leaves Randy Orton in the ring with Braun Strowman to take a huge power slam.

So here we are, Shane is facing Triple H, Braun Strowman and Kurt Angle. The only person to face these odds is LeBron James in the 2016 finals, he won his fight though.

SWERVE!!!!! We see Triple H hit Kurt Angle with a pedigree and then seems to be coming to the aid of his struggling brother-in-law and nope, another swerve. Triple H hits a Shane with one and gets the pin.

Team Raw wins Survivor Series 4-3 and after the match, we see a triumphant Triple H coax his way into getting Braun Strowman to celebrate all of this and clearly the big man is just as confused as all of us. Well, Strowman remains confused and tells Triple H that he never wants to get screwed over again. Well, Trips decides, let me pedigree the big guy but he can’t and after attempting to pedigree him, the COO of WWE eats two running powerslams and we’re left to see Strowman walk to the back.

Like what just happened, what does it all mean?!? This seems like we were getting more RAW storyline out of this then we are with SD Live, although Sami-Kevin attacking Shane will clearly go somewhere. Is Kurt fired? Did Jason Jordan have a hand in any of this? Like what is going on?!?!

The biggest title vs. title match didn’t disappoint as Brock went on the attack early and threw AJ around like a rag doll. Like, I’m not sure if AJ’s over selling stuff but Jesus Christ this is an ass whipping.

However, we get some offense from AJ as he takes down Brock who seemed to have injured his knee and now all the sudden, you start to think AJ may pull this one out and then well, this happens.

Lesnar gets the win and cements himself as the supreme champion of WWE.

After the first five-six minutes of the match were quite dead, I must say that both ladies picked up the pace in the match and in turn, the crowd came alive as well. Arguably the two best female athletes in the company displayed great offense through the air and countered false finishes. Charlotte picked up the victory after a lengthy and athletic battle which may have seen the queen of WWE injured, with Night of Champions coming up is it possible that we may see her get tested by the likes of a Becky Lynch, Naomi or maybe Carmella?

The two tag team champions from each brand give it a go with some great action and confirm that in the pure two-man team, these two are the true champions of each brand (I wasn’t going to say bar because, well that’s their thing). There was really nothing special about the match, it was something that you would see on either SD Live or Raw but these four men have great chemistry with each other and on a stage like Survivor Series that it just means more and the drama is greater.

This match may have had more heat on social media compared to any other match. Even with the Miz’s wife Maryse at ringside, we see Baron Corbin go full tilt Clubber Lang and tell Maryse that this is what a real man looks like and then blows a kiss (Bravo). Meanwhile, each of the combatants has a great back and forth in a match that went longer than I had expected.

Cobrin showed some great ability to overcome both members of The Miztourage and gets the victory over The Miz in what I would call one of the biggest shockers of the night. After the match, we see Corbin have some words for The Miz and the WWE Universe.

The Shield def. (via pinfall) The New Day

People use the term dream match far too often but in this case, this is the only time I will use this for this match. The two best factions of a generation open up the show and display some great three-man offense at various times. But what made this match so great is the storytelling.

You had great scenes of desperation between the two teams, and it all led to three great spots.

First, you had the New Day with what could be called a “Mudhole Stompfest” where Kofi, Xavier and Big E had multiple tags in the ring. Some great arial action from each memeber of the New Day and of course Roman has a Superman punch. As we near the finish, Kofi Kingston is cornered by all three members of The Shield and you know what’s coming….

Triple Powerbomb but not just any triple powerbomb.

What a move! #SurvivorSeries pic.twitter.com/vUwLuWgb0R

We get our first shock pin of the match, nope it’s not Asuka but the SmackDown Live women’s captain Becky Lynch getting eliminated by Bayley with a cheap roll up. Tamina, Naomi, and crew count out Nia Jax but then things started to break down in a strange way.

Naomi pins Alicia Fox but I’m not sure it was a pin but then Naomi goes into the submission, the ref counts it as a pin but as soon as that happens Sasha Banks and taps Naomi out. Carmella gets pinned by Asuka, shocking I know. Sasha gets submitted by Natalya, Tamina takes out Bayley so now we’re down to Asuka vs. Tamina and Natalya.

There’s no way Asuka goes down right? Yeah that didn’t happen. We see Asuka win the match by taking out the two women from SD Live, let’s just give Asuka the Raw Women’s title match with Alexa Bliss already.

Best of the Rest

Most sports: “lets go back to a 2-man commentary, it flows better”
WWE: pic.twitter.com/K12nrz2NiJ