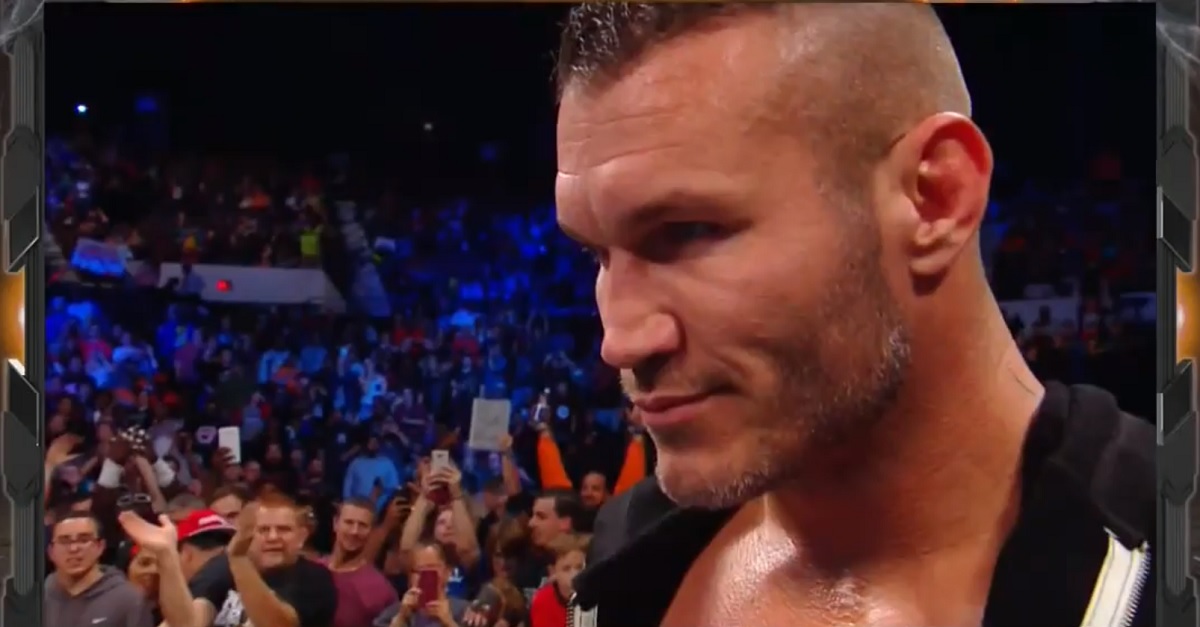 Owens had the early advantage in this match, which included what felt like a three-hour headlock. I guess WWE wanted everyone to get some trick-or-treat action in during the headlock. Nakamura eventually started to get back into the match, which is when Sami Zayn skipped out to the ring from backstage to play cheerleader for Owens.

Owens eventually regained advantage, and Sami Zayn started clearing off the announcers table. This is when Randy Orton’s music played, distracting Owens and allowing Shinsuke to hit the KINSHASSSSAAAA for the win.

What? Did you think @RandyOrton could ONLY hit the RKO outta nowhere?! #SDLive pic.twitter.com/LBWWd9Hrax

This was a 2-out-of-3 falls match. Roode controlled a lot of the match earlier, which included him throwing Ziggler over the top rope where Ziggler ate a nasty fall to the ground. Roode kept control, until Ziggler won the first fall of the match with a superkick. Kind of lame.

To continue to the lame factor, Roode won the second fall during the commercial break. He won it after sling-shotting Ziggler into the ring post, and like the first fall, came after Ziggler had been controlling all of the action before it.

Third fall of the match was much better, as both guys finally brought out their big-boy moves. Ziggler reversed a Glorious DDT into a Zig-Zag, but Roode kicked out. The two then traded a couple of rollup attempts — a callback to their previous matches — before Roode finally hit the Glorious DDT for the win.

Shane finally gave an explanation here, saying that SmackDown Live had always been labelled as the lesser brand between the two. One way to change that? Go to RAW and “kick them in the mouth”.

I don’t know if that alone is going to work, but the crowd did start chanting “Under siege!” at Shane, so apparently it’s working on some level. Shane also announced that he would be the team caption for Team SmackDown at Survivor Series. Yay for Shane jumping off of things, but hopefully it goes better than last year.

Samir lost quickly, but the main point was Jinder Mahal then beating down Styles after the quick match was over. Mahal left Styles laying, hitting him with the Khallas twice as part of his message to Brock Lesnar. Mahal is facing Lesnar at Survivor Series.

Hopefully Styles ends up being more than another stepping stone before Mahal, because crowds really aren’t going to like that.

New Day were backstage in costume, with Xavier Woods dressed as Jimmy Hart, Big E as Akeem, and Xavier Woods as Brother Love. Rusev came over and got mad at them for handing out candy, which led to their match.

Don’t step on Big E’s candy, man! This led to a match later, where Big E (still as Akeem) went up against Rusev. Rusev won after some interference shenanigans, which is good news, because it’s still RUSEV DAY!!!

Sin Cara and Baron Corbin had some convoluted match

Focus here was a spot where Corbin tried to rip off Sin Cara’s mask. Sin Cara then went beserk on Corbin for his actions, including throwing Corbin on the table and then throwing one of the announcers chairs at him. Match was then called off by the ref with no designation if it was a DQ or a double countout.