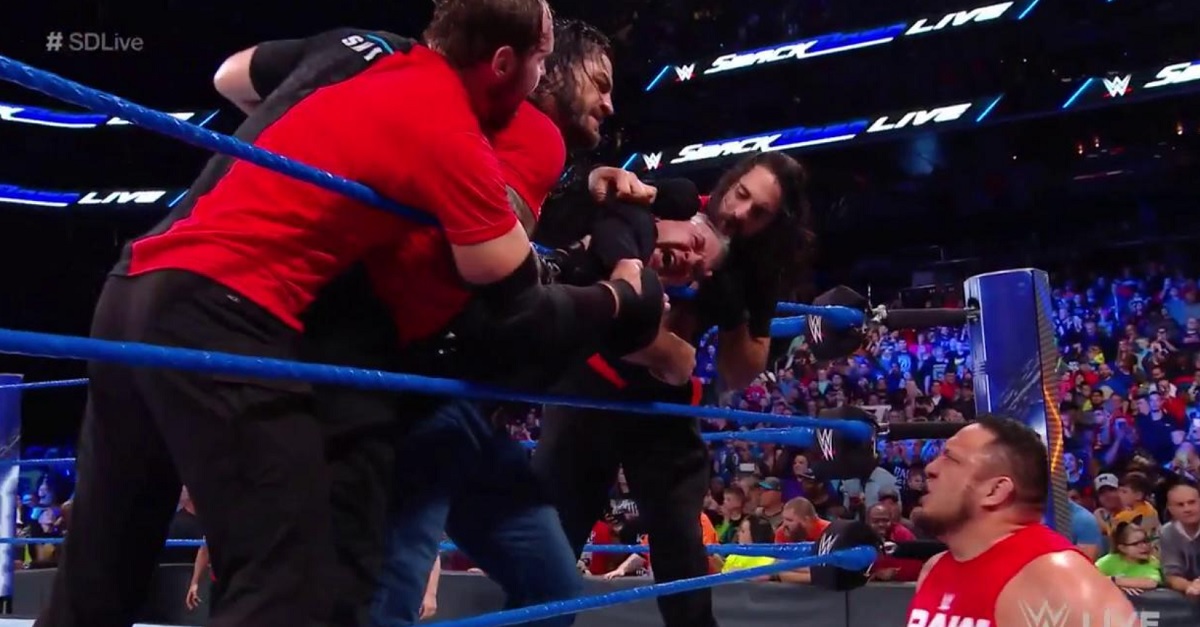 The New Day were having a normal match against Kevin Owens and Sami Zayn when SIERRA, HOTEL, INDIA, ECHO, LIMA, DELTA…

The Shield surround the ring, and it looks for a minute like all five SmackDown members are going to team up to fight them off. That wouldn’t be the case, though, as Owens and Zayn bailed to leave the New Day stranded against the Shield attack.

The Usos tried to make the save for SmackDown, but more and more RAW members came from out of the crowd to counter attack. Eventually Shane McMahon-led reinforcements hit the ring, but RAW had one final trump card to play in the battle: Kurt Angle comes out to the stage to introduce Braun Strowman to the melee, and RAW destroys every member of SmackDown, with Shane getting hit with two powerbombs and an Angle Slam.

After a back-and-forth match, Charlotte was able to break out of Natalya’s sharpshooter, and was eventually able to put on her signature Figure-8. Charlotte got the submission, and in the celebration afterwards, she was greeted by her father Ric Flair, who made his first appearance on WWE television since he was hospitalized several months ago.

Charlotte will now go on to Survivor Series to face Alexa Bliss in a champion-vs-champion match.

In case you forgot, Daniel Bryan can still give a helluva promo.

The returning Bryan addressed the situation that left him out of action for a couple of weeks before getting to the mega-match taking place at Survivor Series: AJ Styles vs. Brock Lesnar. Bryan — calling himself the advocate for Styles — dressed down Lesnar, saying that Styles would be able to wear the Beast down, causing him to quit.

Nothing gets people interested in a title match like going to a commercial within the first minute, am I right?

This match was actually decent for what it was, with the best sequence being where Corbin did the Big Boss Man slide under the bottom rope and back into the ring in order to hit Sin Cara with the Deep Six.

Sin Cara later hit a cool looking moonsault from the middle turnbuckle to the outside. He responded by throwing Corbin back into the ring, going to the top rope, failing to hit a move, and then getting hit with the End of Days and pinned.