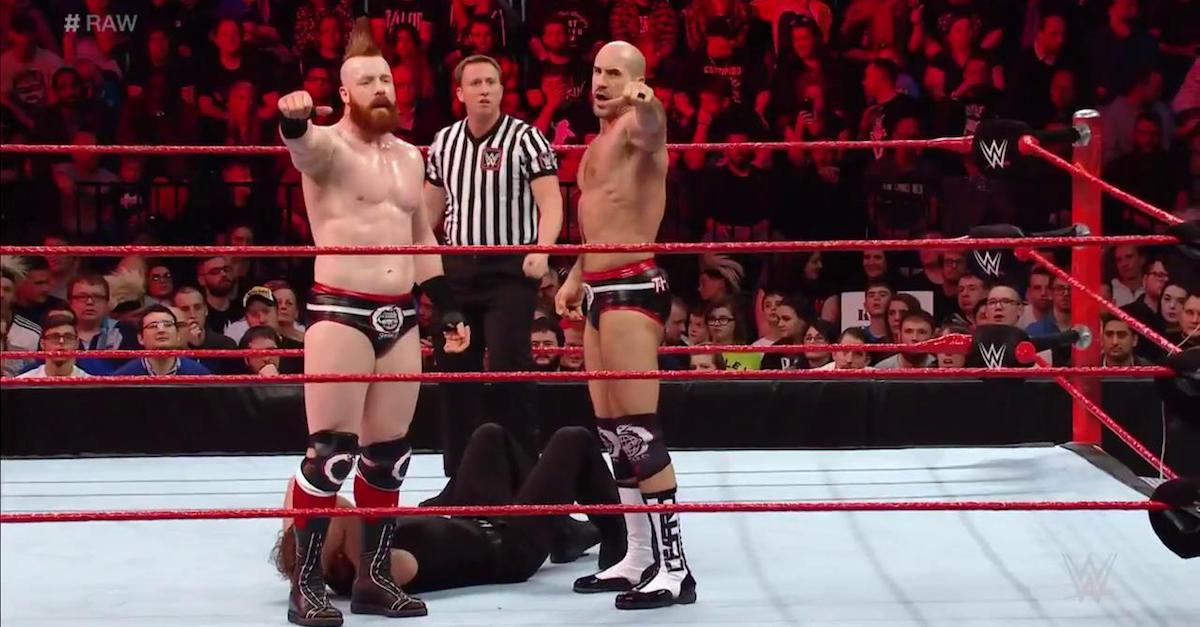 The Bar def. The Shield (via pinfall) to win the Raw Tag Team Titles

In one of the more thrilling tag team rivalries in recent memory, the Bar and Shield take their rivalry to the UK and starting off the match we had some local humor. Both Cesaro and Sheamus came out dressed in Liverpool kits that they wore over their trunks for the match. Quality trolling, I must say but Sheamus gave us a hint earlier in the day.

With @SkySportsNews at #RAWManchester… who will i sign for in the @premierleague? #TheBar pic.twitter.com/H9klfFHGfQ

Once the match started, we saw Cesaro and Sheamus get the early advantage after some Shield spots that were pretty good. There was some back and forth but Cesaro and Sheamus killed that with stopping a patented suicide dive from Rollins and Ambrose. After kicking out of a powerbomb, Seth and Dean hit some quick 2-on-1 action but Cesaro makes the save but OH MY GOD IT’S THE NEW DAY!!!!

Xavier Woods and company come out and cut a promo calling Raw the “B Show” Kurt Angle gets the entire Raw roster out of the locker room and as they come down to the ring, superstars surround the ring (remember, there’s a match still happening) as soon as Kurt gets the troops up the stairs (well Jason Jordan at least) we see Sheamus kicks Rollins in the face and gets the pin. 1-2-3, The Bar are your new Tag Team champs, thanks to the ….NEW DAY!!!

MizTV kicks off the newest episode of Monday Night Raw and goes after Baron Corbin (again) as their social media war goes public but then The Miz invites Kurt Angle out as they talk about major storylines over the past few weeks. If you’ve missed out on some of that stuff, here’s a refresher…

While questioning the leadership of Kurt Angle, due to him putting Braun Strowman on Team Raw at Survivor Series. As The Miz was going after Angle for putting Strowman on the team, the Raw GM announced a match

After destroying The Miz along with Curtis Axel and Bo Dallas, we get Kane. There was no pinfall, just fun destruction by Strowman and then Kane comes out. Ugh, I’m so over Kane showing up. The match ended in a DQ but it was just a waste. Not sure why Kane is being inserted into match after match, it kills the Strowman push.

After cutting a much longer than anticipated promo on Kalisto or England (I’m not sure, it just rambled) we see Kalisto come out and instead of going into the ring, he took a seat outside the ring but then we get the United Kingdom champ Pete Dunne’s theme blasting to the delight of the UK crowd.

Add debuting on #RAW to my 2017 pic.twitter.com/uM7nA2GlRr

After hearing chants of “Brusierweight”, the two actually put on a decent match. Enzo got to really heel it up in the face of the England crowd. Dunne gets the victory over Enzo and after the match, Kalisto raises Dunne’s hand.

Count me in the group of people that want to see Dunne come to the states and compete full time in the WWE.

I’m not sure if we call this a Honky Tonk Man or Jeff Jarrett special but here we are with a guitar on a pole match. You not only had to grab the guitar and hit your opponent with it to get the win (Can’t wait for this to actually be a thing on WWE 2K19). Elias takes down the Guitar but Jordan wrestles it away from Elias and now it becomes a battle who can hit who with a six-string.

After going back and forth, Jordan hits Elias with the guitar in the back for the win. While Jordan picked up the win, there was little pop to the victory. Has the universe soured on Jason Jordan?

Later on in the night, Kurt…you know, Jason’s “dad” and he tells Jason that he’s gonna be named as the last member of Team Raw.

Might be one of the best matches of the night, with the history of these two you know it’s going to be good. Finn Balor and Samoa Joe going at it in the UK, at the start of the match we see Joe have the early advantage over Finn with some cheap tactics.

After a great back and forth, Balor misses with a coup de’ gras on Joe and puts Balor in the coquina clutch, but Balor counters with a stomp on the chest. Eventually, the two go to the outside of the ring are counted out and a double-count out is issued. After the Bell, Balor and Joe continue the fight. Something tells me this will continue for a while.

Whatever keeps the Balor/Abigal angle from happening right? Speaking of Angles, Kurt comes out and says he likes the fight in both and then adds Balor and Joe.