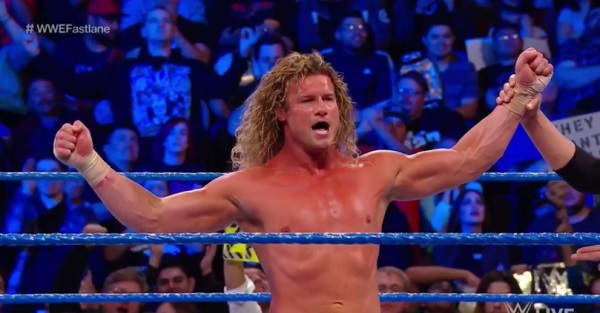 WWE SmackDown Live will be broadcast from Rabobank Arena in Bakersfield, CA on February 13, 2018.

Zayn and Corbin were supposed to have a match for the right to be added to the WWE Championship match at the Fastlane show. Zayn and Owens, already in the match and wanting to keep their odds as high as they can, decided to attack both competitors as the show opened. They started with Corbin backstage, and then took out Ziggler who was already in the ring.

Corbin tried to recover with his own counter attack, but he too was left helpless as Zayn and Owens laughed their way to the back.

Later, Shane McMahon decided to sign singles matches for Corbin against Owens and Ziggler against Zayn so both competitors could earn their way into the WWE title match. This led to…

Crowd wasn’t much into this at the start… there were even chants of “Rusev Day!” at one point.

That said, it was a decent match, as Corbin really seems to start putting things together in terms of match quality recently. Despite Corbin getting attacked at the start of show, he was able to get the win here with the End of Days, and therefore, Corbin will be added to the WWE Championship match at Fastlane.

Owens was backstage, not at ringside, for this one.

Ziggler was fired up early, with the announce crew even mentioning that Ziggler needed to be wary of being disqualified… yeah, that wasn’t going to happen, guys.

The two went back-and-forth in a long match that really started to come to a head when Sami Zayn hit an exploder suplex FROM THE TOP ROPE. No immediate pinfall though meant that Ziggler was able to fight back a little bit before getting thrown into the corner. Ziggler avoided the Helluva Kick from Zayn and hit the Zig-Zag for a TWO COUNT! Can’t believe Zayn kicked out of that one.

Zayn eventually got Ziggler in the corner again and went for the Helluva Kick again only for Ziggler to hit a HUGE superkick to get the pin. With the win, Dolph Ziggler has been added to the main event at Fastlane!

The Fastlane main event is currently as follows: AJ Styles (c) vs. Sami Zayn vs. Kevin Owens vs. Baron Corbin vs. Dolph Ziggler in a Fatal 5-way!

Flair’s quest to defeat all members of the Riott Squad continued this week with Sarah Logan. Despite Logan being relatively inexperienced, she held her own against Flair as the two had a longer-than-expected match.

Flair eventually got the win with this AWESOME looking Natural Selection.

Yeah, that looked great. More of that! (also, RVD would be proud)

After the match, Flair went over to the commentary table and declared that only one member of the Riott Squad was left for her: Ruby Riott.

Best of the rest of WWE SmackDown Live:

The list that EVERYONE is talking about… #SDLive #SDLiveTop10 pic.twitter.com/wjXSbbTCQF

You can find all SmackDown Live results here.