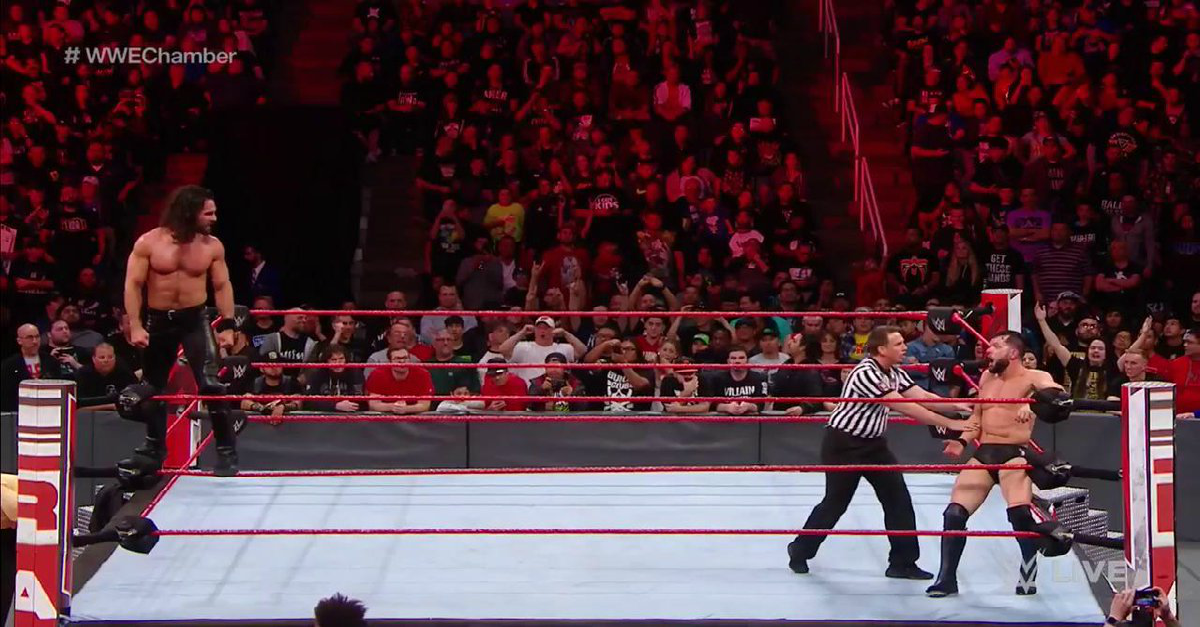 WWE Monday Night Raw broadcasts live with its third show since Royal Rumble leading up to Elimination Chamber on the USA Network at 8 p.m. ET.

This edition kicked off with John Cena in the ring cutting a promo. In typical fashion, Cena started his rant promoting upcoming WWE Network Specials like Elimination Chamber and Wrestlemania. He did make a reference to “Wrestlemania bringing wrestlers back from the dead,” which will certainly lead to speculation about him facing the Undertaker.

While discussing the idea of him theoretically beating Brock Lesnar to create a Wrestlemania moment, The Miz interrupted to belittle our jean shorts loving hero.

The Miz did a great job, per usual, elevating the Intercontinental Championship by way of saying it belongs in the main event of ‘Mania.

Cena and The Miz spent their time arguing about who would be beaten worse by Lesnar.

For reasons lost to logic, Cena challenged The Miz to a match where the loser would be the first person to enter the Elimination Chamber match. The Miztourage would jump Cena, with Kurt Angle interjecting himself to make the match official.

John Cena def. The Miz by pinfall in a loser enters the Elimination Chamber first match

Cena was still on the ground from being jumped during the promo segment. The Miz would attempt a cover, but Cena kicked out. A commercial break, naturally, followed.

When they came back from commercial break, there wasn’t a lot of action. A little back and forth, but nothing all that great. The WWE would then cut to yet another commercial break.

After the second break, we immediately cut to The Miz hurling the figure-four on Cena. John would counter that by putting The Miz in his submission finisher. Neither guy had their move on for long. Strangely paced match at that juncture.

Things began to pick up a bit after that, even with The Miz kicking out of an AA. For whatever reason, they did the submission counter spot for a second time, resulting in The Miz being in Cena’s STFU. Again, The Miz got out of it, then hit The Skull Crushing Finale on Cena, who kicked out of that.

All the finishers. None of the actual finishes.

Cena would win after hitting the AA from the second rope (Super AA). In turn, The Miz is supposed to enter the Elimination Chamber match first.

This was short, yet too long. Hardy talked about deleting stuff and the deletion chamber. He then did his catchphrase “delete” for an awkward 20 seconds.

Prior to the match, The Revival jumped Gallows and Anderson as the Balor Club members were making their way up the ramp.

A decent match that saw a quick finish after some tomfoolery from the heels. The Revival got the victory.

Angle came out to confirm the (real) reports that Jason Jordan underwent surgery and would miss Wrestlemania. After that, he — in character — called out fans for cheering Jordan’s injury. For what it is worth, even if kayfabe, he’s not wrong.

Things got really interesting here, as Rollins cut a promo in which he made a rallying cry to main event Wrestlemania. Rollins asked to be in the second-chance Elimination Chamber qualifying match. Angle asked what the fans thought about it.

The crowd popped, and the fatal fourway become a fatal five to determine the final Elimination Match participant.

With people expecting one of these two performers to turn heel at any time between this match and Elimination Chamber, people were pretty excited for this contest.

The match started off with the two “friends” doing some chain-wrestling, performing each move clean. Quickly, though, Banks would use heel-ish tendencies to gain momentum leading into a commercial break.

In what turned out to be a match featuring a lot of limb work and subtle in-ring storytelling, it wasn’t until near the end that the crowd began to get excited. Despite that, know that it was a good match, even if it lacked high-spots for the majority of it.

Bayley hit the Bayley-to-Belly from the second rope to win.

After the match, as the duo teased a handshake or a possible turn, Nia Jax rushed the ring and destroyed both women.

This was a quick one, but the pace was fantastic. Only notable part of the match was the heels doing away with Bliss on the outside, forcing James in a bad spot. When Rose and Deville attacked James afterward, Bliss came in for the save.

This was a fun segment that had Strowman playing the role of a ridiculously over face.

Elias was in the ring, doing his thing  — continuing his rather meteoric rise as one of the best talents in all of the WWE — when Strowman interrupted him by trying to play a huge guitar and singing a song. Both guys were great in this segment, with Strowman showing how charismatic he can be if given a chance.

This match was fantastic.

If you want to nitpick, since Reigns won, you can complain about him winning despite the heavy interference. If you want to live life in full, you will be happy you got to consume a PPV-level match.

Another tremendous match. Unlike some of the others, this was was great from the ring of the bell. High-spots, crazy bumps, Seth Rollins thankfully no longer wearing those fire-pants, it was everything you could have ever asked for.

The phenomenon of #TitusWorldwide @ApolloCrews is willing to put it all on the line for that final spot in the Elimination Chamber match! #RAW #WWEChamber pic.twitter.com/YEU64aklpH

Apollo Crews, again, put on a stellar performance. It means nothing unless he gets people to be emotionally invested in his character, but from an in-ring standpoint, he belonged with the other main event talents in this fatal five match.

The finish was silly with both Balor and Rollins getting a pin. Raw ended without a resolution to who will be entering Elimination Chamber.