Have you ever wondered what NASCAR drivers do during a rain delay? Well, it varies from driver to driver. Some might make themselves available for a quick interview. Others may toss the pigskin around (we're looking at you, Bubba Wallace and Corey LaJoie). Others may pitch in to help their pit crew, which is what Danica Patrick did during a delay at Michigan International Speedway in 2015.

Joined by Brad Keselowski, Michael Waltrip and Chris Myers attempted to fill time in the Fox Sports studio. Eventually, they cut to a clip of Danica helping a Stewart-Haas Racing pit crew member to dry off pit road by standing on top of the squeegee to apply more pressure as the member pushed it over the pavement.

In any case, the whole scene led to a pretty compromising camera angle, and Keselowski almost couldn't help himself.

To set up the mini Danica segment, Keselowski mentions how Waltrip got "googly-eyed over Danica" earlier that week, to which Waltrip responded "her eyes were beautiful." At least he didn't say that "she smelled like cinnamon" like Brad suggested, but it was still a pretty cringeworthy exchange. But the awkwardness didn't stop there.

After showing the clip of Danica helping her crew, Myers set Keselowski up to explain Danica's "downforce" technique. Keselowski says, "it's more grip, in a different way." Then, comes the weird pause and the follow-up: "I'm trying not to get in any trouble here, but you guys are making it so easy." He didn't say what he was probably actually thinking, so at least that was a plus, I guess.

Now, as for the race itself, it was actually delayed four time times due to the rain: once for 59 minutes on lap 13, again for 34 minutes a couple laps later, once again on lap 44 for 36 minutes, and for the final time with 62 laps to go.

The race was eventually called due to darkness and the ongoing rain. Danica's SHR teammate Kurt Busch was declared the winner of the Quicken Loans 400, while Danica herself raced to a 16th-place finish. 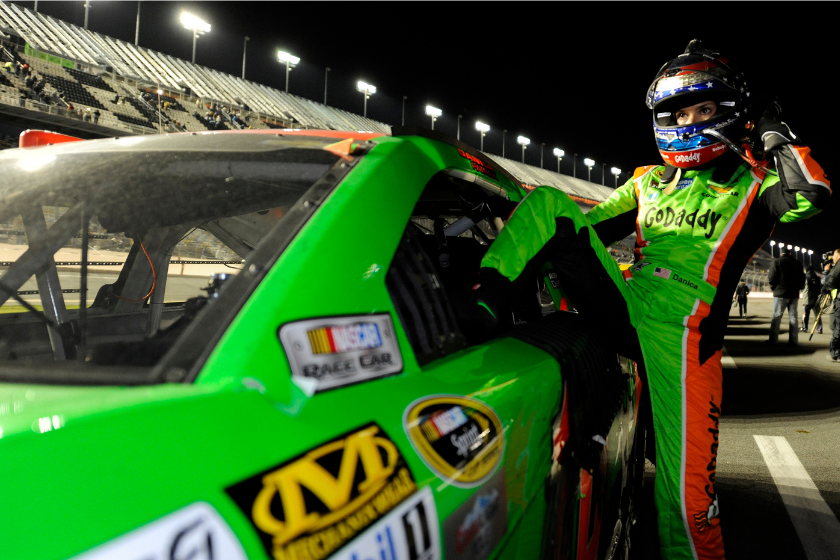 Prior to the 2015 Cup Series season, Danica had already more than proved herself as one of the most dominant female drivers in auto racing history. Not only had she made her mark in the IndyCar Series --  making history twice at the Indy 500 -- but broke several NASCAR records, becoming the first woman to win a Cup Series pole position by setting the fastest qualifying lap for the 2013 Daytona 500 (where she ultimately finished eighth and recorded the highest finish by a woman in the Daytona 500).

Danica continued to make NASCAR history in 2015. With a seventh place finish at Martinsville and a ninth-place finish at Bristol, Danica surpassed Janet Guthrie for the most top-10 finishes by a woman in the Cup Series. Following the Quaker State 400 at Kentucky Speedway, Danica became the first female to start 100 Cup Series races.

While Kyle Busch went on to win the Cup title, Danica finished 24th in the drivers' standings, which was the highest of her career.

MORE: Danica Patrick Made History at the 2013 Daytona 500