Well, that was quick. It looks like Jimmie Johnson is already making his return to racing, with the seven-time NASCAR Cup Series champion announcing at Phoenix Raceway this Friday that he would be joining NASCAR's premier series in 2023 as the part-owner of Petty GMS. In an interview with the Associated Press following the official announcement, Johnson (who will also be running in five Cup races as a driver) credited NBA legend Michael Jordan, who owns 23XI Racing, and Trackhouse Racing owners Justin Marks (a former NASCAR driver) and Pitbull (a Grammy Award-winning rapper) as driving factors behind him deciding to give the whole team owner thing a go.

"I've had a watchful eye on the ownership part and what's happening with NASCAR, and the opportunity that I have here, the business structure and the model with NASCAR charters is just so different from than anything else in motorsports," Johnson said. "I want to be part of it. We certainly watched Michael Jordan join, what the Trackhouse Racing folks have done, and there's all these rumors of people who want to get into the sport."

"I'm honored and thankful that I'm going to be part of it." 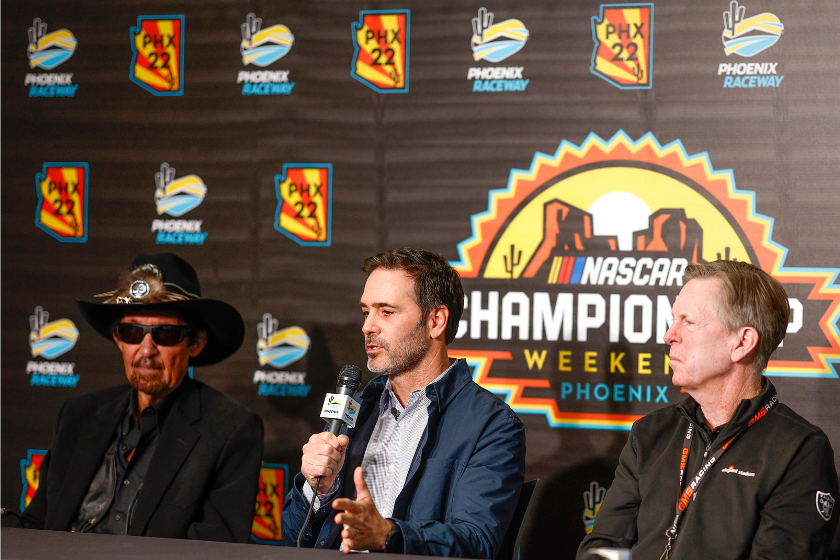 Johnson's announcement was particularly well-received by Rick Hendrick, the team owner of Hendrick Motorsports, where Johnson spent the entirety of his 20-year career in the Cup Series. Clearly, it'll take some getting used to go from longtime partners to competitors, but Hendrick seems up for the challenge.

"This is a tremendous day for our sport. Jimmie is one of the all-time great champions on the racetrack, and I know he'll apply the same mentality to his role as a team owner," Hendrick said in an official statement. "Seeing Jimmie in a fire suit with his name on the roof of a Chevrolet at the Daytona 500 is going to be very special for a lot of people. Competing against him will certainly be a change, and a big challenge, but we welcome his return to NASCAR and look forward to the next chapter of a truly remarkable career."

Petty GMS, which was formed by seven-time Cup Series champion Richard Petty and Allegiant Air CEO Maury Gallagher, fields two cars in the Cup Series, with Ty Dillon driving the No. 42 Chevy and Erik Jones running the No. 43 Chevy. The team isn't necessarily a massive contender in the Cup Series currently, but it certainly isn't lost on Gallagher that having 14 championships between the team's two front-facing owners should do wonders for morale.

"Jimmie is just a tremendous guy and in my older age, I value relationships as much as anything," Gallagher told the AP. "I'm more of a background guy. I want Jimmie and Richard to be the faces of the organization, help on the economics and the operations is just a big bonus."