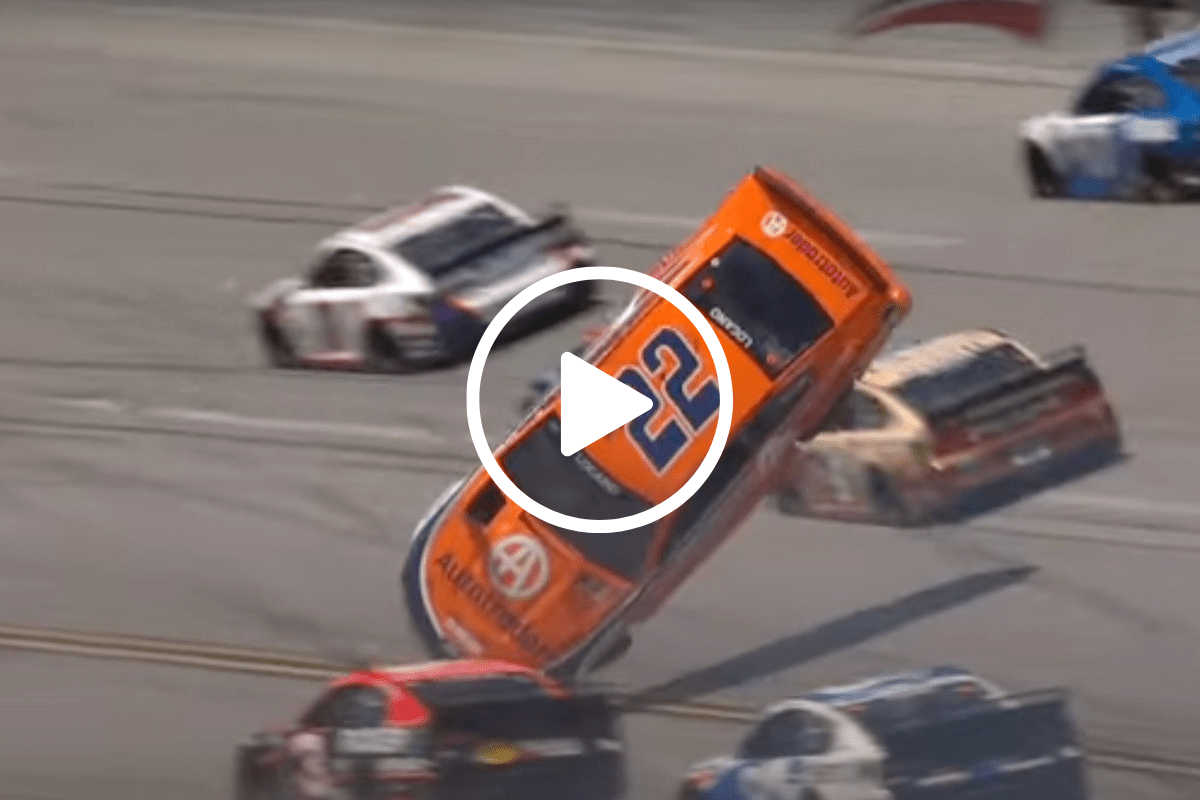 Joey Logano experienced a series of terrifying events at Talladega Superspeedway back in April 2021, as the Team Penske driver’s No. 22 Ford went airborne on the final lap of the first stage at the Geico 500.

Logano was running third in the NASCAR race, when he was hit by Denny Hamlin‘s No. 11 Toyota after Ricky Stenhouse Jr.’s No. 22 Chevrolet struck Hamlin.

Logano’s car went airborne due to the contact, and his car skidded on its roof before eventually rolling right side up and sliding into the infield grass.

Following the crash, Logano, who was fortunately uninjured, ultimately criticized the style of racing that’s common at Talladega and Daytona International Speedway. He even referenced Ryan Newman’s wreck at the 2020 Daytona 500.

“I guess I don’t know exactly what to think,” Logano told Fox in a post-race interview after leaving the infield care center. “It is a product of this racing. On one hand, I am so proud to drive a Cup car that is safe, and that I can go through a crash like that and get out and speak about it. On one hand, I am mad about being in the crash and on the other, I am happy to be alive.”

“On another hand, I am wondering when we are going to stop because this is dangerous doing what we are doing. I got a roll bar in my head. That is not okay. I am one hit away from the same situation Ryan Newman just went through. I just don’t feel like that is acceptable.”

“A lot of it is the big spoiler and the big runs and all the pushing. It is nobody’s fault. Denny (Hamlin) is trying to go and (Stenhouse) is trying to go. It is a product of this racing. We have to fix it though. Someone already got hurt and we are still doing it, so that’s not real smart.”

“At the same time, I am appreciative of driving a car that is this safe and what Team Penske has done for the safety of these cars so that I can live to talk about it and go again. I got lucky that I didn’t get hit while I was in the air.”

Brad Keselowski, Logano’s teammate who ended up winning the race despite getting caught up in the wreck, added, “No doubt we got to find a way to keep cars on the ground. I don’t care what the rules package is. We start there. Can’t have cars leaving the ground.”

“We’re pretty good drivers, but none of that stuff works when we’re in the air. The gas pedal, brake pedal, steering wheel, shifter. We’re not rudders. When that thing gets in the air, it lands where it wants to. What goes up must come down. It’s not a jet-propelled airplane. We have no way to control where it comes down, so we absolutely have to find a way to keep them from coming off the ground.”

While those watching the NASCAR Cup Series race got a pretty good idea about the severity of Logano’s wreck, it’s a whole different level of intense when you’re an actual driver.

In the below helmet cam footage from Bubba Wallace, you can see a terrifying POV look of the high-flying incident.

Safety Changes at Daytona and Talladega

After investigating the incident, NASCAR issued a rules bulletin a couple months later that slowed speeds at Daytona and Talladega by around 7-10 mph. The new rules also further maintained the integrity of the driver’s compartment in the event of a rollover.

Not surprisingly, the biggest rule changes in NASCAR have occurred after major wrecks at Talladega or Daytona. The first major safety change in the sport came after Bobby Allison’s massive Talladega wreck in 1987. Following this, NASCAR required restrictor plates to be used on stock cars that race at Talladega and Daytona.

After Dale Earnhardt’s fatal wreck at the 2001 Daytona 500, NASCAR mandated safer barriers and implemented the use of a head and neck restraint known as the HANS device.

The Cup races at Daytona and Talladega are known to be two of the most exciting events in NASCAR, but with that excitement clearly comes extreme danger. While fans want to be entertained, they obviously see the importance of driver safety, and more rules changes will likely continue to be made to prevent the sort of wrecks that happened to Joey Logano.