Every NASCAR Cup Series season, there are at least a couple NASCAR feuds and rivalries that captivate fans and drivers alike, and 2022 was no different. You had Ross Chastain getting under the skin of about half of the Cup Series roster throughout the season. Joey Logano and William Byron infamously duked it out at Darlington. Brad Keselowski and Austin Dillon traded blows at New Hampshire. But, perhaps the most overlooked feud was between Hendrick Motorsports teammates Kyle Larson and Chase Elliott. Why was it overlooked? Well, because if you ask either of the former Cup champs, it wasn't really a feud at all. But, we know better.

It All Started at Fontana

It only took two races for Kyle Larson to get under Chase Elliott's skin. As Larson, Elliott, and Joey Logano were battling for the lead with just 20 laps to go in the NASCAR Cup Series race at Auto Club Speedway, Larson forced Elliott into the wall. All you had to do was listen to Elliott's in-car radio to get an idea of how fired up he was over Larson's move. I'd say "stupid motherf***er" pretty much summed up Elliott's feelings. If the two of them weren't teammates, we might have even had ourselves a little dust-up on pit road. After all, Elliott was running in a good spot, and Larson seemingly had enough room to make his move without making contact with Elliott's No. 9 Chevrolet. Ultimately, Elliott was credited with a 26th-place finish, while Larson got to celebrate his big win in Victory Lane.

Immediately after the incident, Larson tried to smooth things over, claiming he didn't know Elliott was there (his spotter Tyler Monn later shouldered the blame for the run-in). Hendrick Motorsports officials also worked tirelessly to make sure there was no bad blood between their top drivers, with general manager Jeff Andrews working as referee with the immediate post-race comment: "We'll look at all the facts. We'll look at what happened, and we'll talk about it as a company."

Ahead of the following week's race at Las Vegas, Larson and Elliott apparently met and hashed things out. According to Larson, it was all water under the bridge.

"It was good to have a conversation and good to hopefully move along from it," Larson after his Vegas qualifying run. "It went well. Honestly, better than I anticipated. He's a good teammate and I'm going to do my part to be a great teammate each and every week, and hopefully, we never have any instances happen like what happened last week."

Fox Sports reporter Bob Pockrass later tweeted that Elliott appreciated Larson's apology, but Elliott himself never seemed to address the issue head-on with any sort of verbal statement. If you ask me, it's because he was still pissed off about the whole thing, but didn't want to rock the boat by exacerbating the situation. As for Larson, his "hope" that there wouldn't be a repeat of the Auto Club situation would not pan out.

The Bump at the Glen

Fast forward to the Watkins Glen International race in August, and you have another situation of Kyle Larson getting the better of Chase Elliott with some aggressive racing. On the final restart of the race, Larson and Elliott led the field coming into Turn 1. Things went south for Elliott after Larson ran him wide, causing the two to make slight contact. Larson cleared Elliott, earning him his second win of the year (notice how both of Larson's regular-season wins came at Elliott's expense), while Elliott dropped a few spots and ended up finishing fourth. While not as egregious as his move at Auto Club, Larson did show some remorse for bumping Larson.

"I am not proud of it," Larson said in a post-race interview. "I don't like to do that. But in that moment, that was my only shot to win. I haven't won a lot this year. I felt like I did what I had to do to benefit our playoffs."

Elliott, meanwhile, was clearly upset, both with himself and likely Kyle, but seemed to mince his words during his own post-race interview.

"I just got beat," Elliott said. "Congrats to Kyle. I tried. It doesn't matter. I failed and lost the event."

Again, in an attempt to keep the peace between Elliott and Larson, Jeff Andrews did his best damage control.

The Long and Short of the Larson-Elliott Feud 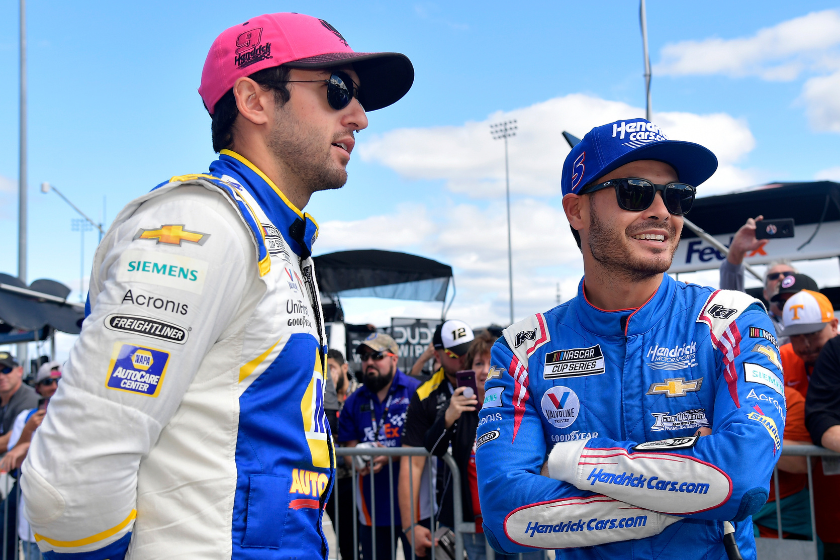 The feud between Kyle Larson and Chase Elliott is not a knockdown, drag-out type deal. It's a simmering situation with the ability to escalate in the next season or two. Just think about it. We're talking about the 2021 Cup champ in Larson and the 2020 Cup champ in Elliott, who also won the regular season title this past year. These guys are two of the best in NASCAR, and they also happen to be on the same team. When you have two guys who want to do whatever it takes to win, that can create a tricky situation for a team, because optimal teamwork in NASCAR looks like a driver pushing his teammate to victory. It doesn't look like a driver bumping his teammate out of contention to steal the win.

Now, if Elliott is legitimately fine with occasionally having run-ins with Larson, then there's nothing to worry about. When it comes to his relationship with other drivers, he plays the consummate professional fairly well. His Most Popular Driver run speaks to that. But, as even-keeled as he can appear, he's also a fierce competitor. He can only play the yeah-it's-no-problem-don't-worry-about-it act so many times, even if he's doing it to his own teammate, before he blows up. Let's just say that if we have a couple more repeats of Watkins Glen and Auto Club in 2023, it's probably going to take more than a Kyle Larson apology and a team meeting to calm Chase down.

MORE: Chase Elliott Confirms He Eats Wings With a Fork and Knife, Then Later Denies It at the NASCAR Awards