On July 20, 1969, the Apollo 11 spaceflight landed on the moon. Inside were astronauts Neil Armstrong and Buzz Aldrin. Several hours later, Armstrong became the first person to walk on the moon, during which he uttered the famous line, "That's one small step for man, one giant leap for mankind."

As you probably know by now, the '69 moon landing -- an occurrence that pretty much everyone on the planet used to just accept as historical fact -- is now considered by a faction of conspiracy theorists to be some sort of hoax orchestrated by the U.S. government and Stanley Kubrick. The date of the moon landing used to be nothing more than a question you might get asked during a round of bar trivia, but now it's something you need to have actually an opinion on: did the moon landing happen in 1969 or was it actually much later? If you were to ask some of the biggest names in NASCAR, you'd find that they were pretty divided on the answer. Thankfully, the folks over at For the Win did just that.

During the Daytona 500 media day back in February 2019, 11 NASCAR drivers gave their takes on whether or not the 1969 moon landing was real. Needless to say, it's a topic that must make for a lively debate at the Busch household.

What Do NASCAR Drivers Think About the '69 Moon Landing? 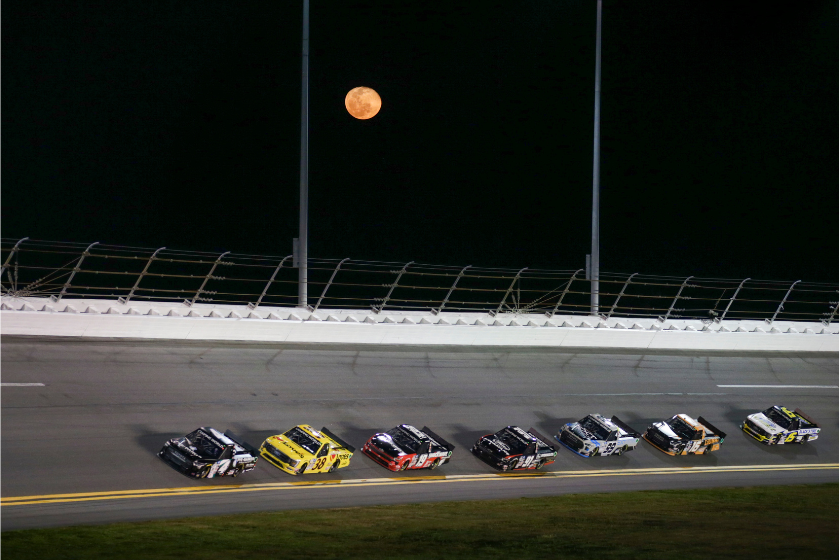 Martin Truex Jr., Clint Bowyer, and Chase Elliott are among the drivers who think that the moon landing went down in 1969. Elliott also felt compelled to add "and the Earth is not flat," maybe as a subliminal dig against Kyrie Irving, who was outspoken over his flat-earther beliefs at the time.

How, you ask? Ryan Blaney actually thinks that the moon landing would've been pretty easy to fake."

"Easy to fake that," Blaney said. "You get a studio. It's pretty easy. I know it was 1969, but you could figure it out. They have studios, they know how to make movies, but I don't know. No one will ever know if we actually did or not, except for Mr. Buzz Aldrin."

"I think we did, yes," Kurt Busch said. "My (late) grandma had the newspaper from the Chicago Tribune from 1969. I framed it, and it's up in one of my spare bedrooms. I thought it was cool. it was found in one of her boxes of old newspapers. I found that one to be the most important or significant. Not saying we landed on the moon -- no I'm just kidding!"

Kurt should probably show that old newspaper clipping to Kyle sometime, and, while's he's at it, show it to Kyle Larson and Brad Keselowski as well, since they both weren't entirely convinced that the 1969 Moon landing was legit.

"Sure, we landed on the moon," Larson said. "But I don't know. There's a lot of stuff that I guess there's conspiracies on, but I'm not educated enough to give an answer.

Keselowski added, "To pull that off with the technology they had in 1969 seems so inconceivable to me. But then again, the only thing that seems more inconceivable than pulling that off is pulling off a conspiracy from 1969 until now."

"That's really the question. What is more plausible, that the government pulled off a 50-year conspiracy or that the government paid a buttload of money to get the best people in the world to fly a rocket to the moon? I'm going to say the conspiracy is more unbelievable. I believe that we went. But I have moments (where I'm undecided)."

"What did my teammates say? Blaney doesn't believe! It's a younger generation thing."

Though he wasn't asked his opinion ahead of the 2019 Daytona, Ryan Newman gave his thoughts a couple months later during an interview with USA Today. Put him down as a member of Team Skeptic.

"I'm not a denier, I just don't know, I don't believe it's true," Newman said. "I don't have proof to believe it's true. I can't go off a picture or a video or whatever stage they were on. They were just trying to beat the Russians to a good photo op."

Wow. Maybe this would be as good a time as any for some of NASCAR's finest to take a tour of NASA's facilities. They clearly need a history refresher.