That first Cup Series win is a monumental time in any NASCAR driver's career. Some drivers go their entire stints in stock car racing without getting one. So, after Ryan Blaney raced to a hard-fought victory at the 2017 Pocono 400, the 23-year-old driver of the No. 21 Ford for Wood Brothers Racing celebrated like most drivers in his position would: He partied. Hard.

Joined by fellow NASCAR drivers Bubba Wallace, Ricky Stenhouse Jr., and Danica Patrick, as well as a number of close friends and family members, Blaney threw himself a barn burner of a house party at his North Carolina pad that went into the early hours of Monday morning. As you can see from this picture that he posted on Instagram the night of the big shindig, Blaney also had a very special guest over to throw back some cold ones. A NASCAR A-lister, if you will. It was none other than NASCAR Hall of Famer, and Blaney's good friend and mentor, Dale Earnhardt Jr.

Now, Dale Jr. also happened to be Blaney's neighbor at the time, and being the stand-up guy that he is, he knew he couldn't just show up to Blaney's place empty-handed, especially after his big day at Pocono Raceway. So, when Dale and his wife Amy arrived to join in on the revelry, they also came with four coolers of beer in tow. Now that's how you keep a party going!

"Our kick ass neighbor wins his first race. We pack the coolers...and provide curb service," Amy Earnhardt captioned a later-uploaded Instagram post. "We are so happy for you and proud of you, Ryan Blaney. The beginning of a great career! Cheers my friend!!!"

As Amy predicted, Blaney's first Cup win wouldn't be his last. Now driving the No. 12 Ford for Team Penske, Blaney has celebrated in Victory Lane an additional six times and has also racked up a total of 106 top-10 finishes. His best season came in 2021 with wins at Atlanta, Michigan, and Daytona and on his way to a seventh-place finish in the standings. Blaney has yet to see the checkered flag in 2022, but when NASCAR heads to Pocono on July 24, maybe he'll get the repeat he's been chasing since that big win in 2017. 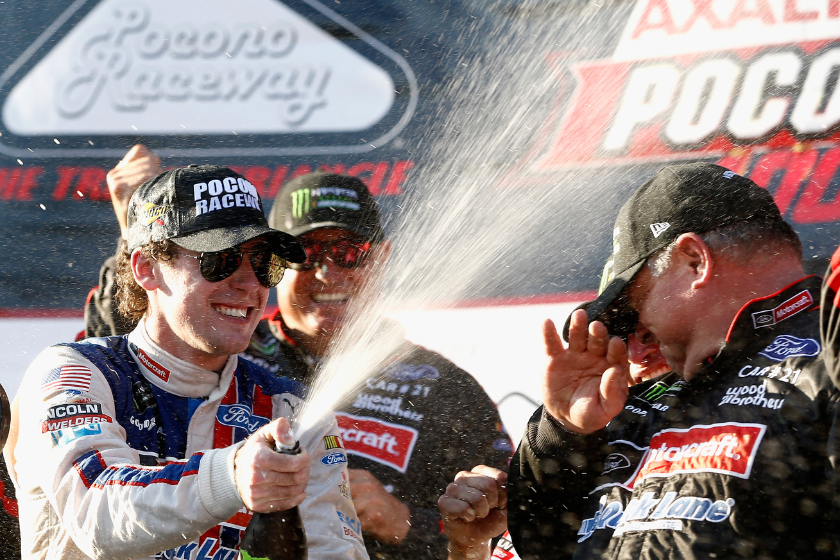 Ryan Blaney's first career win in the NASCAR Cup Series didn't come easy, as he had to hold off two former champions in the process.

The fourth caution of the race came out after Kasey Kahne slammed into the wall coming into Turn 1 due to a brake failure, and during the ensuing restart with 12 laps to go, Blaney snatched the lead from Kyle Busch following a series of failed blocking maneuvers from the Joe Gibbs Racing driver. For the final nine laps of the race, Blaney kept an eager Kevin Harvick from passing and ended up besting Harvick by only 0.139 seconds, becoming the first Wood Brothers Racing driver to win a Cup Series race since Trevor Bayne won the Daytona 500 in 2011. Coincidentally, Blaney, who was 23 at the time, became the youngest first-time winner since Bayne, who was 20 years old when he won The Great American Race.

The gravity of the moment certainly wasn't lost on Blaney, especially considering his own family's history at Pocono and the fact that Long Pond, Pennsylvania is less than a five-hour drive from Blaney's hometown of Trumbull County, Ohio.

"I think it exceeds the dream a little bit," Blaney said. "I grew up watching my dad (Dave Blaney) race on this race track, and it's so cool to get the Wood Brothers in Victory Lane, No. 1, and to do it here at a race track that is really close to Ohio -- a home to me -- is pretty awesome."

Blaney would put up seven more top-10 performances in 2017, with his next-best finish being a third-place showing at Kansas Speedway. He would ultimately finish ninth in the standings during Martin Truex Jr.'s title-winning season.