Outside of a museum or hall of fame, Tony Stewart has one of the most impressive racing helmet collections of all time. Period. They run the motorsports gamut, from NASCAR to IndyCar to drag racing to Formula One. Of course, many of the helmets that he owns are ones that he himself wore during different points in his career, and while there's a story behind each one, naturally, some are more meaningful than others. As it turns out, one of the most special helmets in Tony's collection actually belongs to another legendary NASCAR driver: seven-time Cup Series champion Jimmie Johnson.

After winning his final championship at Homestead-Miami Speedway in 2016, Johnson celebrated in Victory Lane just like he had after winning his previous six titles. But, he did something slightly different this time: he handed the helmet he had just worn behind the wheel of his No. 48 Hendrick Motorsports Chevy to his good friend Tony.

For the past six years, the helmet has been one of Tony's most prized possessions, and during a recent interview with Racer, he opened up about just how special that helmet is to him.

"I still tell Jimmie, I view that helmet that it's on loan from him and I've always told him, 'That helmet will never go anywhere,'" Stewart said. "If there's a day when he decides he wants it back, I'll hand deliver it to him personally. That's a significant helmet in the history of this sport and that's something I cherish. The value of it isn't because of what it is. It's because of who it came from and the fact that it was a personal gift from him." 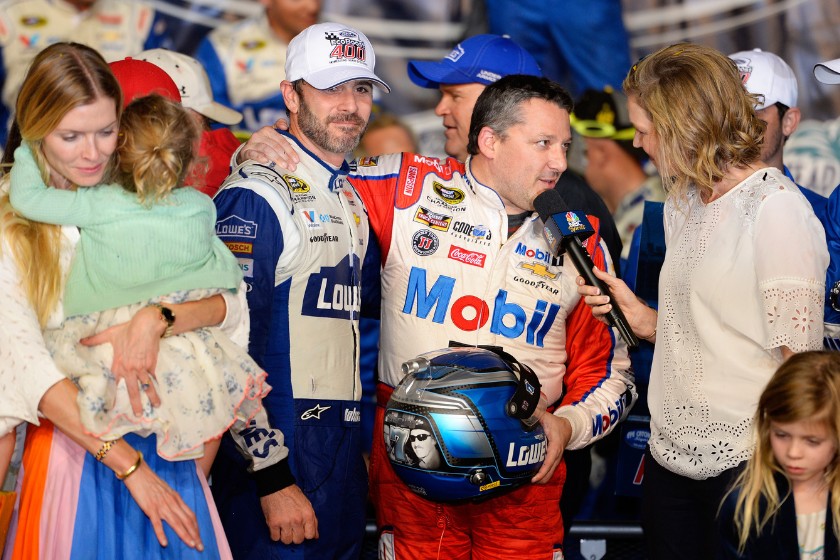 Tony Stewart and Jimmie Johnson were fierce Cup Series competitors for nearly 15 years, from Johnson's rookie season in 2002 to Stewart's final season in 2016. During that time, Stewart won three titles (2002, 2005, and 2011), while Johnson won seven (2006, 2007, 2008, 2009, 2010, 2013, and 2016), tying him with Richard Petty and Dale Earnhardt Sr. for most Cup championships. Despite both their competitive natures, the relationship evolved into one of mutual respect. In fact, Johnson has even praised Stewart in the past for teaching him how to run well at Martinsville Speedway, a track where he won nine times over the course of his Cup career.

Today, with Tony as a NASCAR Hall of Famer and Jimmie as a future Hall of Famer, the racing icons are the best of friends. It's obvious that Tony thinks the world of Jimmie, and you'd have to imagine that the feeling is mutual.

"I always remind him at the end of the conversation that when I grow up, I want to be him," Stewart said.

It's pretty incredible that Stewart and Johnson have a physical connection to each other in the form of Johnson's final championship helmet. It's not like they need one, but considering that the helmet is such an important part of Johnson's career as well as racing history, it only helps to make their NASCAR brotherhood and bond all the more meaningful.