It's a tough day at the office when your keeper records 16 saves, setting a World Cup record, especially when the rest of the team is wildly overmatched and can't bail him out. That was the case for famed US goalkeeper Tim Howard, who stopped 16 of 18 Belgian shots on goal in the Round of 16 in the 2014 FIFA World Cup. This performance set a record for most saves in a World Cup game. But in the end the US came up short in extra time, losing by a score of 2-1.

But still, US Soccer fans and most casual soccer fans remember the game where Tim Howard put the US National team, and the rest of the US watching stateside, on his back and almost carried them to glory.

Tim Howard Becomes a Wall, Records the Most Saves in a World Cup Match 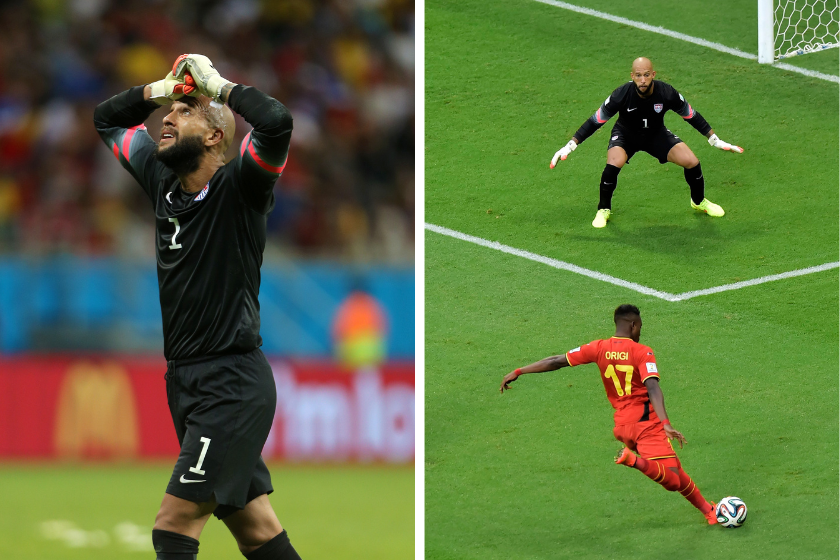 Tim Howard holds the record for most saves in a World Cup match. That's right. An American holds a global soccer record.

While most casual soccer fans with remember the 2014 World Cup as the one where Germany absolutely blew out host nation Brazil. What they may forget is how USA goalkeeper Tim Howard kept the States in World Cup, by standing on his head against Portugal and then making World Cup history in the Round of 16 against Belgium.

Howard, originally from New Jersey, faced pressure less than a minute into the elimination World Cup match when he had to sprawl out to stop Divock Origi's shot. In almost ESPN highlight fashion, Howard, who played for Manchester United form 2003-07, made an incredible save with his toe, sending the shot out of bounds. And it wouldn't stop there for Jurgen Klinsmann's keeper.

On the sixth Belgian shot attempt, the 6-foot-3 Howard had to show off his vertical prowess as he lifted a rising shot up and over the bar. On Shot Eight, he found himself one-on-one with Divock Okoth Origi and made a sliding save to stuff that attempt. Shot 10 saw Eden Hazard take his best attempt on the American keeper, who again said no. Shots 13 and 14 were attempts by Belgium superstar and Howard's then-Premier League teammate, Romelu Lukaku. Both Hazard and Howard's Everton brother were denied by the keeper. Shot 15, by Kevin Mirallas, had an open look that was no match for Howard. Shot 16 was yet another by Lukaku who had an open look after shredding the American defense.

The Americans were outmatched by the Belgium side. And while Kevin De Bruyne and Lukaku's extra-time goals would send the US packing, upending a clean sheet, we all remember that Tim Howard's performance kept the game from being a bloodbath. The 35-year-old keeper almost set the Americans up to steal a spot in the Quarterfinals by himself.

At the end of the day, the USMNT goalie stopped 12 shots with his hands and body, four with his feet, won man of the match honors, and would later receive a call from the U.S. Secretary of Defense Chuck Hagel, who would thank Howard for "Defending America." But in his recollection of how he felt just after that game, as he told it to FIFA.com, the US keeper sounded almost melancholic. "I mostly felt sadness and anger. Some numbness." Not the words you would expect to hear from someone who just set a World Cup record. But then again, most heroes are humble and at the end of the day, that's what Tim Howard is.