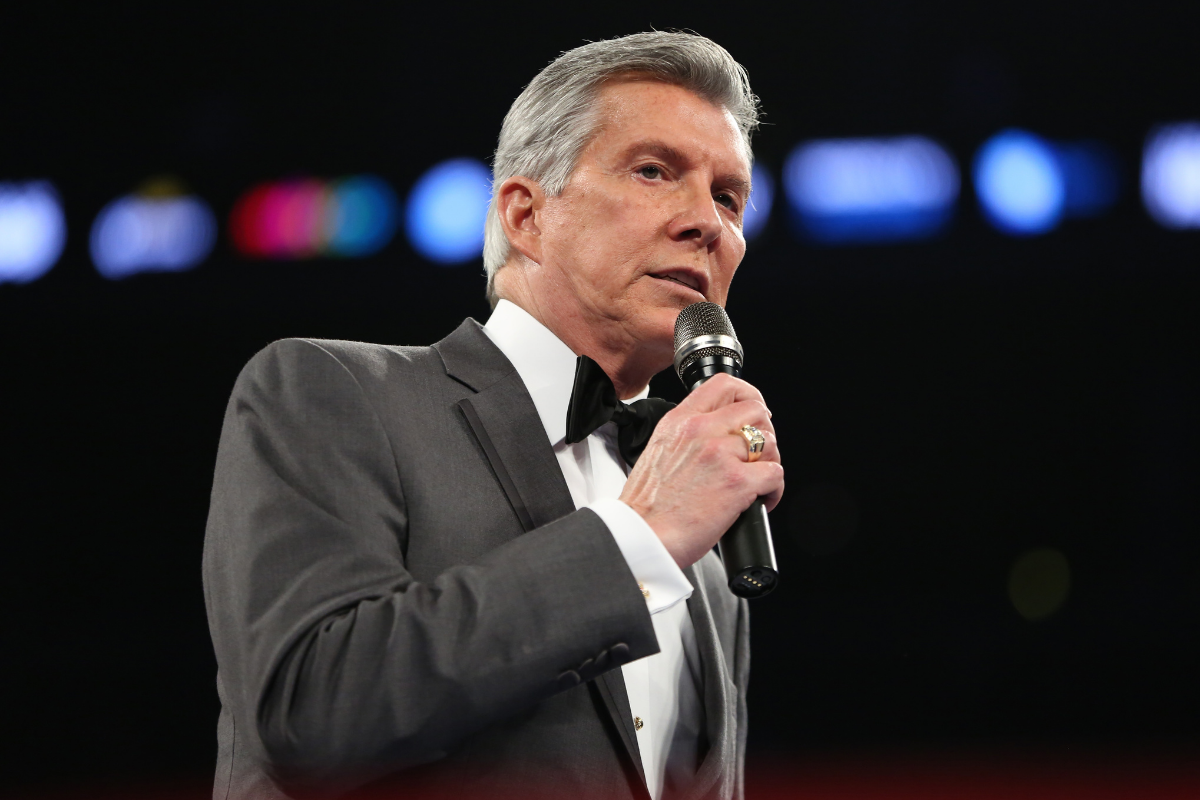 Michael Buffer has the most recognizable voice in combat sports history.

The boxing announcer coined and trademarked the incredibly popular “Let’s Get Ready to Rumble!” catchphrase, which he uses to hype up the crowd before boxing matches.

Buffer has been announcing boxing events for nearly 40 years, and he’s made a gargantuan fortune from his time in the industry.

So, just how much is the 76-year-old Michael Buffer worth after all those years?

RELATED: Bruce Buffer Makes a Boatload of Cash Each Fight

His birth father was in the United States Navy serving in World War II when Buffer was born, and his parents divorced when he was a baby.

As a result, Buffer was placed with foster parents. Buffer served in the Vietnam War after enlisting in the United States Army when he was 20 years old.

Michael Buffer first tried his hand at announcing back in 1982 at the Playboy Hotel and Casino of Atlantic City for a performance he dubbed “quite horrible.”

He quickly became one of the most entertaining announcers across all sports.

Buffer has announced a multitude of main event fights and earned praise from various boxers across the world. Sugar Ray Leonard once told Buffer, “When you introduce a fighter, it makes him want to fight.”

It wasn’t only boxing that made Buffer famous. Buffer served as the exclusive ring announcer for World Championship Wrestling up until the WCW folded. He still remains Time Warner’s lead announcer for its pay-per-view content and has done announcing for HBO’s broadcasts of Top Rank professional wrestling bouts.

Additionally, Buffer has been on the broadcast for various marquee sporting events, including the MLB’s World Series, the Stanley Cup Finals, the NBA Finals and multiple NFL Playoff games.

Buffer was diagnosed with throat cancer back in 2008, a terrifying diagnosis for an individual who depends on his booming voice for his career. Fortunately, Buffer was able to get successful treatment and barely missed a beat.

Michael Buffer has also featured on various talk shows, including ones hosted by David Letterman and Jay Leno. Additionally, he’s played cameo roles in movies and TV shows such as “You Don’t Mess With the Zohan,” “Saturday Night Live,” “Rocky Balboa,” “Rocky V,” and “Creed.”

In fact, Buffer proposed to his third wife, Christine, while live on the air with Leno.

Michael Buffer isn’t the only announcer in his family. His half-brother is UFC announcer Bruce Buffer.

Bruce has been a mixed martial arts announcer for the UFC since 1996, and even served as Michael’s agent/manager during the 1990s. It was actually Bruce who advised Michael to trademark his famous catchphrase.

That piece of advice paid off tremendously for Michael, who made more than $100 million from video game maker Midway after his voice was used in the boxing game “Ready to Rumble.”

Across his near four decades in the sport, Michael Buffer has become the face of ringside announcing, and man has it paid off for the 76-year-old.

According to Celebrity Net Worth, Buffer boasts an estimated net worth of $400 million.

MORE: Floyd Mayweather?s Net Worth Takes His ?Money? Nickname to a New Level