Bruce Buffer has been in the octagon for more fights than any fighter in the history of UFC. By now, the American mixed martial arts ring announcer is world renowned and known as the "veteran voice of the octagon" for the Ultimate Fighting Championship.

The official octagon announcer for UFC events has introduced primetime names like UFC fighters Conor McGregor, Anderson Silva, Jon Jones, Khabib Nurmagomedov, Randy Couture, Amanda Nunes and Ronda Rousey since UFC added his voice in 1996. No one can hype up a fight quite like the man with the last name Buffer.

Bruce Buffer is one-half of ring announcer royalty. His half-brother, Michael Buffer, is far more established for his career in the boxing and professional wrestling scene. If it wasn't for a wild story that brought the two together, they may have never dominated their respective sports the way they have.

Bruce travels the world to introduce the biggest MMA fights on the planet, and he makes very good money doing it. The UFC announcer doesn't just speak words. He bellows them through fans' bones, preparing them for what could be a five-round bloodbath or a 10-second knockout.

Either way, Bruce Buffer has made millions over the years doing so.

Bruce Anthony Buffer was born on May 21, 1957, in Tulsa, Oklahoma, to Joe and Connie Buffer. He had one brother (as far as he knew) named Brian. He was raised in Philadelphia, Pennsylvania, where he took up martial arts as a teen. He studied judo and earned a green belt in it.

By 15, Buffer's family moved to Malibu, California. There, he met two students of the great Chuck Norris who introduced him to Tang Soo Do. He holds a second-degree black belt in the Martial Art, and also holds the rank of green belt in Judo. After kickboxing in his twenties, he was forced from the sport following two concussions at 32. The kickboxer would return to the octagon soon enough in 1996 for the Ultimate Fighting Championship. 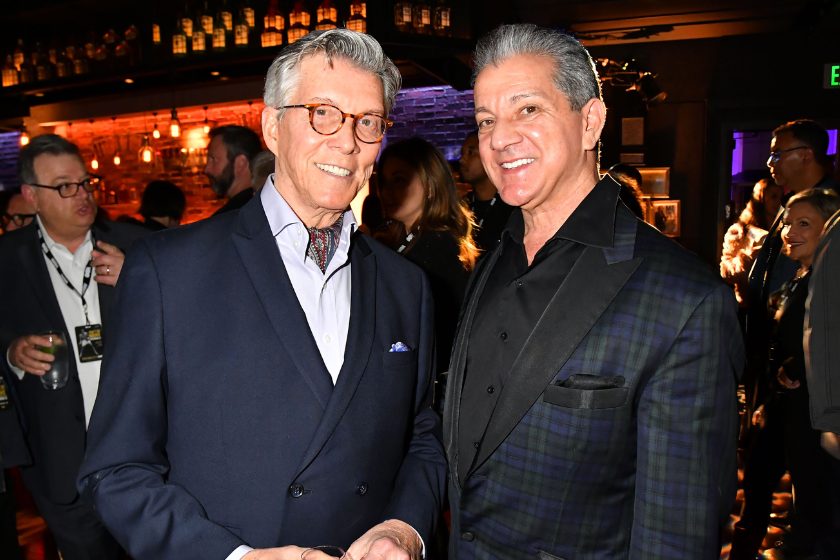 Photo by Jeff Kravitz/FilmMagic for HBO

Yes, you probably knew the two were related. After all, what are the odds they end up at the top of such a niche career? But the crazy story behind how and when they met is incredible.

Michael Buffer was 49 when he met his half-brother who was 13 years younger than he.

Bruce had a telemarketing company at the time. He scanned the phonebooks like it was nobody's business. Never during his time doing this did he find another person with the last name Buffer in the country, except for his relatives in Philadelphia.

After seeing Michael Buffer on TV as the ring announcer for some of the most famous boxing events in the world, Bruce wondered: Could it be? He asked his father, Joe Buffer, who revealed to him some shocking news: Joe had married a woman while he served in World War II and had a son. They divorced soon after and he never saw the kid again. That kid? Michael Buffer.

"I met Michael when I was 29 years old..."@brucebuffer tells @CarolinePearce the simple incredible story of how he found out @Michael_Buffer was his brother ?

Happy birthday to the Veteran Voice of the Octagon ? pic.twitter.com/yC5qZcK6Zo

Michael's foster parents gave him the last name Huber. When he went to the Vietnam War, the recruiters saw his birth certificate featured the surname Buffer and told him that was his real name. He went by it ever since.

So in 1989, Michael received a phone call from Joe. The three of them got together in California for dinner and hit it off. Just like that, a family was reconnected.

Bruce eventually became his brother's agent/manager. After watching Michael do his thing in the ring for Evander Holyfield vs. Riddick Bowe in 1992, including belting out his famous "Let's Get Ready To Rumble!" catchphrase, he hatched an idea to make Michael a very rich man. He trademarked the phrase and became president and CEO of their company, The Buffer Partnership.

"That was then and we're here today and I'm still his manager and partner. We have a fantastic relationship and I love my brother very much," Bruce told BT Sport. 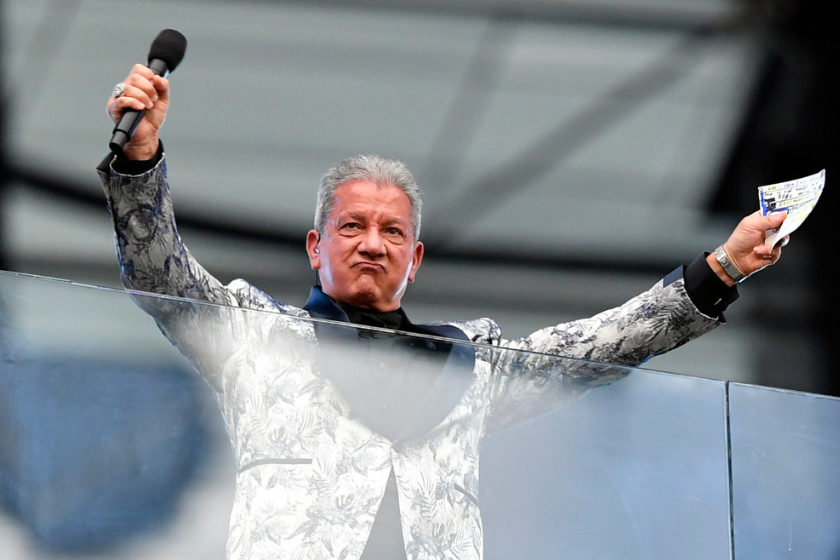 Buffer is a man of many talents, so it should come as no surprise that he is a world-rated poker player. He's appeared on ESPN's World Series of Poker Main Event and played alongside pros like Chris Moneymaker, Howard Lederer, Erick Lindgren and Patrik Antonius.

His voice is so recognizable that it's used all over pop culture. Buffer has made a cameo in the TV show "Friends" and the HBO series "Entourage" as well as Comedy Central's "Tosh.0". The announcer even showed his face in the movie Hot Tub Time Machine 2 (2015).

Buffer's likeness is valuable. It's why the video game Smite features him as an announcer pack. It's why he's the official announcer for the World Series of Beer Pong. Yes, really. He makes money via partnerships on his social media accounts and even wrote a book, It's Time!: My 360-Degree View of the UFC.

The UFC legend also lent his voice to the NFL for the return of Monday Night Football back in 2021. With the game kicking off in Las Vegas, the Raider correctly assumed that fans in the city known for big-time title bouts would appreciate Buffer's presence. And boy did he set a tone. So much so, that the NFL invited him back to do the introductions for the 2022 NFL Pro Bowl.

RELATED: Female UFC Star: 'I Make More Money on Instagram Than I Do Fighting'

Bruce Buffer's personal life is pretty unknown for the most part.

He was married to a woman named Annie Buffer, but they divorced in 2015. They had one son together named Dougie Buffer, according to Bleacher Report.

Even at 63, Buffer has no complaints about the family-less life he lives. In fact, he's quite proud of the fact that he can sleep with whomever he wants.

"Most married men are completely jealous of my existence, the way it's designed. As far as, surrogate wife, surrogate kids. I get to travel the world like James Bond, not have to kill anybody and I can sleep with whoever I want. Right? Unless I'm in a committed relationship. As we've seen in the past, If I'm committed, I'm committed. I think there's been a couple of three months of commitment," he said on the "Sex and Relationship" edition of his "It's Time" podcast. 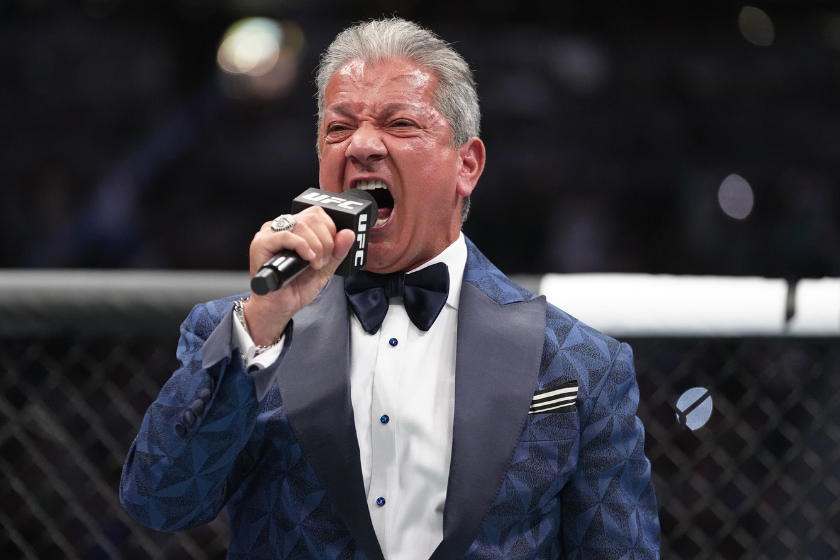 Bruce Buffer reportedly earns $50,000 per UFC fight and $100,000 for special UFC events. Take into consideration that women fighters sometimes make as little as $40,000 (according to Paige VanZant) per fight and that's good money.

It's great money considering the "veteran voice of the octagon" has become well known for two words: "It's Time." How did that phrase come to be? Buffer said he used to look in the mirror every morning and tell himself that.

"The main event is happening now. It's time. This is where it's all gonna come down. This is where you lay it all on the line. Let's do this," he told ESPN.

Buffer does much more than say that. He announces the sponsors, the referee and introduces each fighter. He's more than just words. When Bruce Buffer stands in the ring he puts on a show. No, a spectacle. One that has become just as entertaining as the fight itself.

The dude even developed a signature move, the "Buffer 180", which he utilizes to introduce fighters. At the request of Joe Rogan, Buffer once delivered a "Buffer 360" spin to introduce Frank Mir and Brock Lesnar.

"Listen -- catchy little f---ing things like that I'm not really into," UFC president Dana White told ESPN. "But Buffer's 'It's Time' -- the way he delivers it is incredible. And it's become a thing. This guy is a total professional, perfectionist. This guy doesn't miss a show, never, no matter where it is, how close the shows are together, he will fly anywhere. He's always very prepared and kills it every single time."

It's true, Bruce Buffer is the best in the biz. UFC isn't the only organization that gets him, and his work isn't limited to the United States. He's worked as an announcer at MMA promotions and K-1 events, the 2008 Joel Casamayor vs. Michael Katsidis boxing match and the Abu Dhabi Combat Club (ADCC) submission wrestling tournament as a wrestling ring announcer.

Bruce Buffer's Net Worth is a Knockout 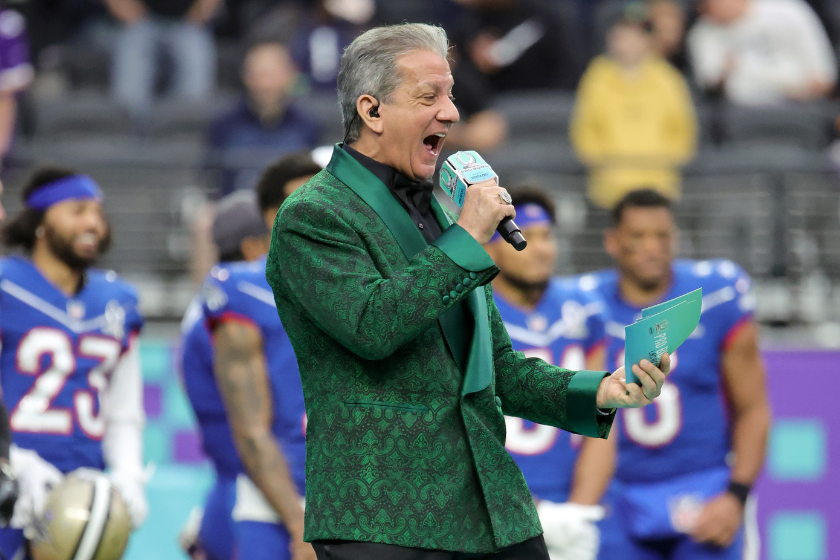 Bruce Buffer has an estimated net worth of $10 million, according to Celebrity Net Worth.

He's accumulated that wealth in a number of ways, but the greatest is from his job as a UFC announcer. Considering he still has a ton of voice left in him, don't expect him to retire anytime soon.