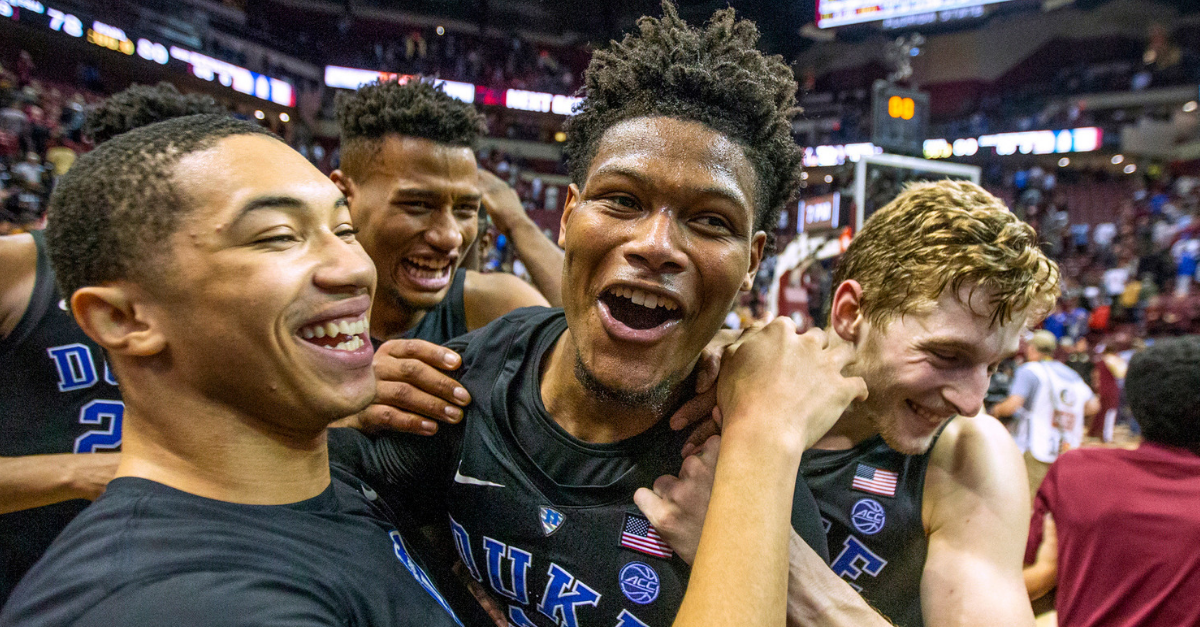 RALEIGH, N.C. (AP) — Duke remained firmly entrenched at No. 1 for a fourth straight week in The Associated Press men’s college basketball poll, which was enough to give its Hall of Fame coach another record.

The Blue Devils led an unchanged top 10 in Monday’s AP Top 25 and spent their sixth week on top this season. That gave coach Mike Krzyzewski his 122nd week at No. 1 in the AP poll, breaking a tie with the late UCLA coach John Wooden for the most in poll history.

Duke had set a program record for most weeks at No. 1 in the AP poll in November, also by passing UCLA.

The Blue Devils stayed at No. 1 after Atlantic Coast Conference road wins at Wake Forest and Florida State, the latter coming on a last-second 3-pointer by freshman Cam Reddish. Duke received 36 of 64 first-place votes entering a week that will see the Blue Devils host No. 4 Virginia in a marquee league matchup between ACC favorites.

Behind Duke, second-ranked and unbeaten Michigan earned nine first-place votes, third-ranked Tennessee had 13 and Virginia — the only other unbeaten team — had the remaining six. That quartet is significantly ahead of the rest of the field, with the gap between the Cavaliers and No. 5 Gonzaga (158 points) being bigger than that between Duke and Virginia (85 points).

Michigan State, Kansas, Texas Tech, Virginia Tech and Nevada rounded out the rest of the top 10 for a second straight week.

The changes started from there after a week that saw 12 of the 15 teams outside the top 10 lose at least once, with five of those losing twice, and combining for 17 losses.

Five teams rose in the new poll, starting with FSU climbing two spots to No. 11 despite the loss to Duke. No. 12 Kentucky was next, joining No. 15 Marquette as the week’s biggest climbers by rising six spots.

No. 16 Buffalo and No. 20 Oklahoma (which lost to Texas Tech last week) each rose three spots.

No. 21 Houston fell four spots after suffering its first loss of the season, which came against Temple. No. 14 Auburn and No. 25 Indiana each fell three spots, No. 17 North Carolina State slid two and No. 13 North Carolina fell one after winning on the road against the Wolfpack, followed by suffering its worst home loss under coach Roy Williams, which came against Louisville.

Mississippi had a big week by beating Auburn before its victory over Mississippi State. That was enough to get the Rebels back into the poll at No. 18, the program’s first ranking since spending two weeks in the AP Top 25 in January 2013. Pretty good for a team that didn’t receive a single vote from the panel only a week earlier.

Three teams — No. 19 Maryland, No. 22 Villanova and No. 23 Iowa — returned to the poll after appearances earlier this season.

The ACC had a leading six teams in the AP Top 25, followed by the Southeastern Conference and the Big Ten, which each tallied five. The Big 12 (three) and the Big East (two) were the only other leagues with multiple ranked teams.