The NCAA Tournament is a black tie event. The 68 teams that make the field dress up in their Sunday best, comb their hair and bring extra mouthwash before making their entrance to the big dance. Some teams get all dressed up for nothing, only to fall in the first round. Others bring an extra outfit because they know they'll be grooving the night away.

Then there are the Cinderellas -- the teams who dress to the nines, hoping to make the most of their time before the clock strikes midnight. In 2022, the St. Peter's Peacocks shut the party down.

When 15-seed Saint Peter's shocked 2-seed Kentucky -- the national champion pick of countless brackets -- in the first round of this year's March Madness, most everyone's bracket was ruined. We've seen 15-seeds upset 2-seeds before. They're inspiring stories and the greatest moment in the lower-seeded program's history. Traditionally, though, those teams flame out the next game.

Saint Peter's, however, kept on winning and got within one game of the Final Four in New Orleans. Few people knew of this small Mid Atlantic Athletic Conference (MAAC) program based in Jersey City, New Jersey. And when you see the limited resources they worked with, it's a no-brainer that the Peacocks are the underdog story of the year. 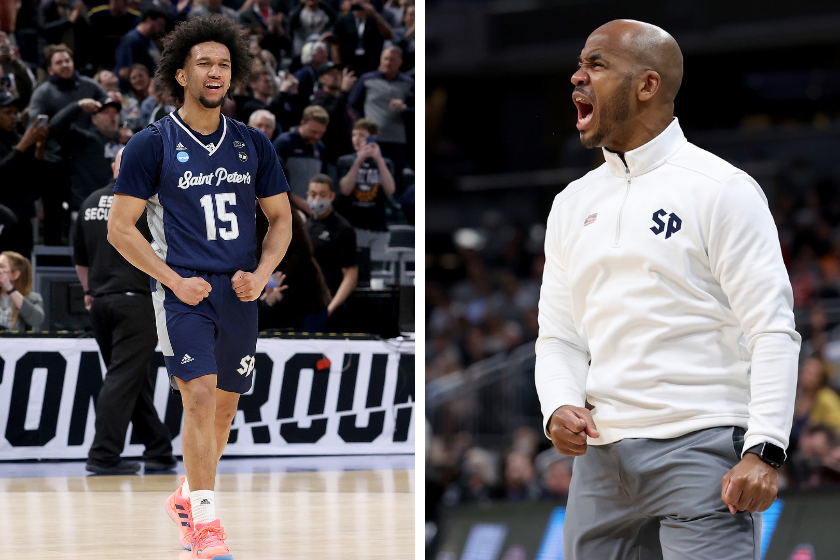 Let's set the scene: Saint Peter's head coach Shaheen Holloway had built a steady program. It's nothing short of a miracle he was able to sustain success in his four years at the helm because there isn't a college basketball program in the country who has to fight a bigger uphill battle.

Anyway, Holloway's Peacocks entered the 2022 Big Dance on a seven-game winning streak that helped them win the MAAC tournament. Their reward was the mighty Kentucky Wildcats, who were led by Naismith Player of the Year Oscar Tshiebwe, in the first round of the NCAA Tournament The Peacocks stunned everyone by not only taking the Wildcats to overtime, but beating them 85-79 behind Darryl Banks III's 27 points and Doug Edert's 20 off the bench.

They faced Murray State next, who were eight-point favorites entering the game. Thanks to KC Ndefo's 17 points and a plus-8 rebound differential, the Peacocks won 70-60 to become only the third 15-seed in NCAA Tournament history to make the Sweet 16.

This was when Saint Peter's started to differentiate themselves. Sure, double-digit seeds make the second weekend, but most of the time their luck runs out. However, the Peacocks outmatched the towering Purdue Boilermakers and top-5 NBA Draft pick Jaden Ivey, 67-64, to punch a ticket to the East Regional Final. Once again, Matt Painter and Purdue failed to come through in March. On the other hand, Saint Peter's needed another miracle against North Carolina in the Elite 8.

Unfortunately, the eighth-seeded Tar Heels were on an underdog run of their own, having beat No. 1 seed Baylor in the second round and No. 4 seed UCLA in the Sweet 16. Red-hot UNC sped the clock up to midnight, sending Saint Peter's home with a 69-49 win.

So ended the greatest Cinderella run in NCAA Tournament history.

Saint Peter's turned into a national sensation over night. Doug Edert -- with his mustache, smooth shooting stroke and NIL deal with Buffalo Wild Wings -- became a star. A team that plays in what's essentially a high school gym beat teams who play in coliseums.

No, they didn't go to the Final Four. They didn't win it all. But they went further than any 15-seed has before and danced until the DJ stopped playing.