It was against university policy for the Purdue basketball team to have players shorter than 7-foot-1 on their roster until recently. Guys like Zach Edey, Matt Haarms and Isaac Haas -- who are all at least 7-foot-2 -- are the reason Purdue has become known as Tree U.

So the Boilermakers have a history of big men, but last year, Purdue's best player was a blazing fast guard named Jaden Ivey. Ivey sprung onto the 2021-22 college basketball season as one of the country's most electrifying players. He's lightning-quick, can jump out of the gym, has a great handle and a solid jumper to go along with a 6-foot-4, 195-pound frame.

Ivey was the focal point of Boilermakers season, but if you've caught any of Purdue's NCAA Tournament games, you saw another member of the Ivey family nearly as much as Jaden. Niele Ivey, Jaden's mother, is the head coach of Notre Dame's women's basketball team and cheered on her son from afar as her team made a run to the Sweet 16 in the Women's NCAA Tournament.

She was also a star hooper herself, which helps explain Jaden's talent.

Niele Ivey: A Notre Dame Lifer But Jaden's Mom Above All Else 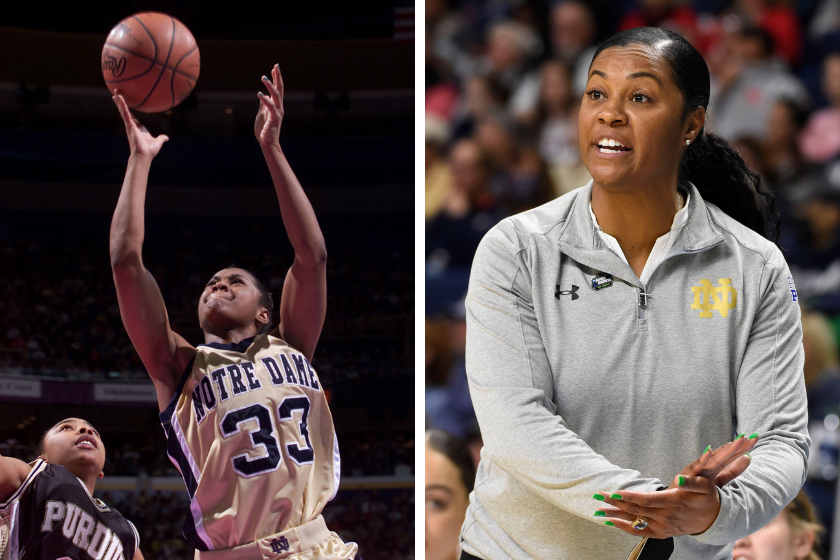 Niele Ivey grew up in St. Louis, Missouri before becoming something of a Notre Dame Fighting Irish legend. She played point guard for five seasons under Basketball Hall of Fame coach Muffet McGraw, reaching two Final Fours during her collegiate career and winning a national championship as a senior.

The basketball player was then selected in the WNBA Draft and played for the Indiana Fever, Phoenix Mercury and Detroit Shock for five years before getting into coaching. She returned to South Bend to support McGraw on the bench after a short stint as an athletics administrative assistant at Xavier. Eventually, she worked her way up to associate head coach and helped guide Notre Dame to seven more Final Fours and another national championship in 2018.

Her assistant work at Notre Dame caught the attention of Memphis Grizzlies head coach Taylor Jenkins, who hired her as an assistant coach for his first season leading the franchise. However, the pandemic riddled 2019-20 season was Ivey's only one on a NBA bench. Minutes after McGraw retired in 2020, Ivey was named Notre Dame's new head coach. Who could turn down an opportunity to lead their alma mater?

The Irish women struggled in Ivey's first season leading the program, going 10-10 and missing the big dance. However, they rebounded for the 2021-22 season and more than doubled their win total in the gauntlet that is ACC women's basketball. Ironically, they're national title hopes were squandered by conference opponent NC State in the Sweet 16.

Despite having her own March hoop obligations, Niele wasn't going to miss Purdue's NCAA Tournament games. Ivey and her coaching staff gathered in her team's hotel ballroom in Norman, Oklahoma to watch the Boilermakers. Her reactions were frequently shown on the broadcast when Purdue made a big play.

But her setup for watching her son's March Madness games was a one-off occurrence. She regularly made the two-hour trip from South Bend to West Lafeyette to watch Jaden during the season, and he was more than thankful when she was able to break away from her coaching duties.

"It means a lot because I know she has a hectic schedule herself having to have practice and games as well. It can be tough on her because after she's done with work, she [has] to drive to come see me," Purdue guard Jaden Ivey told Andscape. "I'm blessed that she's able to come see me play most of my games this year. Down the road, wherever my path may lead me, I'm just hoping she can be able to come watch me play." 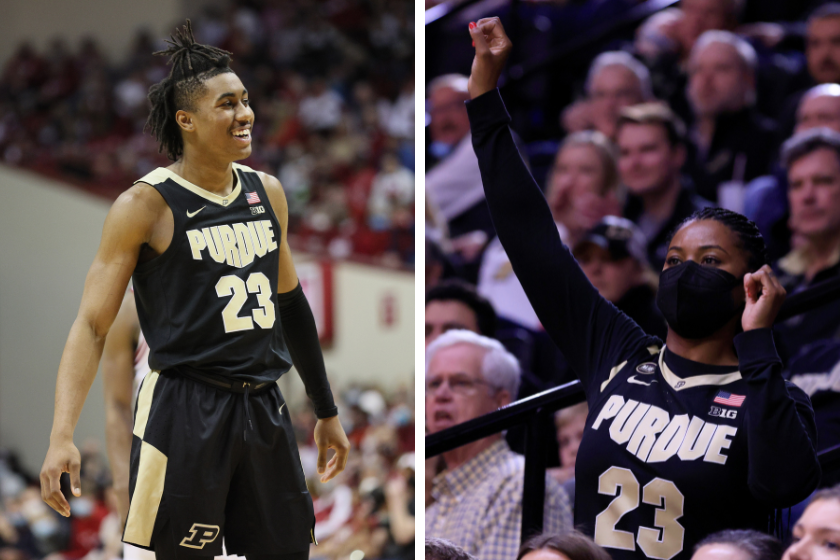 Niele's job doesn't afford her much leeway to watch her son play in person, but it makes the games she is able to attend that much more valuable.

"I think we kind of make it look easy but it's not, because I missed a lot of things. I've missed so many of his [middle school] championships because of work," his mother said, per Andscape. "So those types of moments I feel like are the hardest because I always want to be there. I want to be present to support him and sometimes my work doesn't allow, but when it does, it's just so much joy when I get a chance to be there because I know how much that means to him. That support and love we have for each other trumps all the hard times."

Niele will undoubtedly be at the Barclay's Center in Brooklyn, New York for the 2022 NBA Draft to see Jaden's dreams come true. The second-team All-American solidified himself as one of this year's top draft prospects, currently being projected to go fourth overall to the Sacramento Kings following Jabari Smith, Chet Holmgren and Paolo Banchero, respectively. Ivey's explosiveness has drawn comparisons to Russell Westbrook, Ja Morant and Anthony Edwards.

Niele may be more well known as the Notre Dame women's basketball coach, but she's Jaden's mom first and foremost. Whether she's supporting him from far away or courtside, she will always be his number one fan.

This article was originally published on March 21, 2022.