The Texas A&M Aggies entered the 2022 college football season as the No. 6 team in the country. Head coach Jimbo Fisher was fresh off reeling in the highest-ranked recruiting class of all time. Desmond Howard had them in his preseason College Football Playoff. There was real belief that the Aggies could beat the mighty Alabama Crimson Tide for a second straight year.

Four months later, Texas A&M is spending the 2022-23 bowl season at home after a 5-7 finish. It's not the year fans with a national championship on their minds were expecting. In fact, it couldn't have gone much worse.

That's why Fisher -- who failed to lead Texas A&M anywhere close to these goals -- is FanBuzz's 2022 Disappointment of the Year. 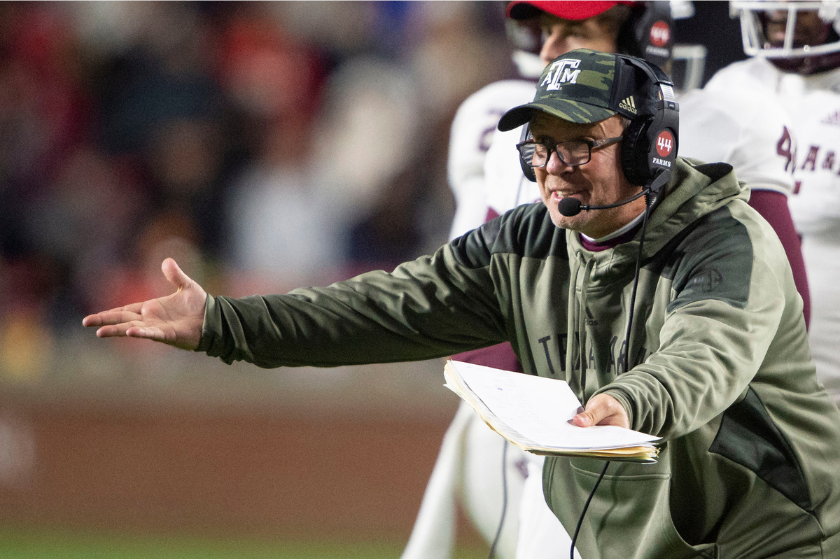 RELATED: There's Only One Thing to Blame for A&M's Horrible 2022 Season: Coaching.

I can throw in all sorts of stats and sabermetrics, but the eye test is all you needed to gauge what kind of team Texas A&M was this year. The defense was left out to dry because Fisher's convoluted offensive scheme couldn't build long drives. Freshman Conner Weigman was clearly the answer at quarterback, but he didn't start until the eighth game of the season. There wasn't any cohesion. There wasn't any improvement.

It's laughable to think this team was thought of a national championship contender. It finished with as many SEC wins (2) as Vanderbilt. Vanderbilt!

And let's not forget the early-season loss to Appalachian State at home. The Mountaineers controlled the ball for 41:29 compared with Texas A&M's 18:31. That's nearly 70% of the game. Then there's the last play against Alabama, where Fisher tried to run a scoring play from earlier in the game to the short side of the field -- against Nick freaking Saban.

These are just a few of the countless times throughout the season when fans were asking, "What is Jimbo thinking?" It reached a point where buying out Jimbo's ludicrous 10-year, fully guaranteed $95 million contract wasn't that crazy. Yeah, paying Jimbo $85,950,000 (his buyout this year) not to coach Texas A&M was seen as a solid investment to some. That's how bad things are in College Station.

I still think it'd be ridiculous to buy Jimbo out for that much. But the Aggies have no one to blame but themselves for being in this position. A fully guaranteed contract worth $95 million with no double-digit win seasons and no SEC Championship Game appearances? Thank you, Brian Kelly and Lincoln Riley, for completely altering the coaching market.  If Texas A&M is just as bad next year and shows no signs of improvement, it will be justified to pay his $76,800,00 buyout next year, which is absolutely insane. Jimbo will be the proud owner of the biggest fleece job of all time if that happens.

Sure, Fisher won a national title at Florida State, but he came to College Station on a downward trajectory. He's shown he can be good, not great, in his five years at A&M. And with Ole Miss and LSU gaining strength in the SEC West, it won't get any easier.

Is it better to have national championship expectations and see them miserably fail than to not have them at all? That's the $95 million question.

MORE: Nation's No. 1 Running Back Flips to Texas A&M