The Arkansas Razorbacks punched their ticket to the Elite Eight for the first time since 1995 after beating Colgate, Texas Tech and Oral Roberts in the 2021 Men's NCAA Tournament. A big reason for the Hogs' success is the man in charge: men's basketball coach Eric Musselman.

Musselman has endured a long and winding coaching career to get to this point. The son of former NBA head coach Bill Musselman, Eric began in the Continental Basketball Association (CBA) before serving as an assistant coach in the NBA for teams like the Minnesota Timberwolves, Orlando Magic and Atlanta Hawks.

The SEC basketball coach's path led him from head coach of the Golden State Warriors and Sacramento Kings back to the college ranks. Brief stints at Arizona State and LSU preceded a head coaching gig at Nevada and eventually the University of Arkansas in 2019.

The Arkansas men's basketball coach's personal life has included quite a deal of twists and turns, too. He has two kids from a previous marriage and another with his current wife, who is a former ESPN anchor. 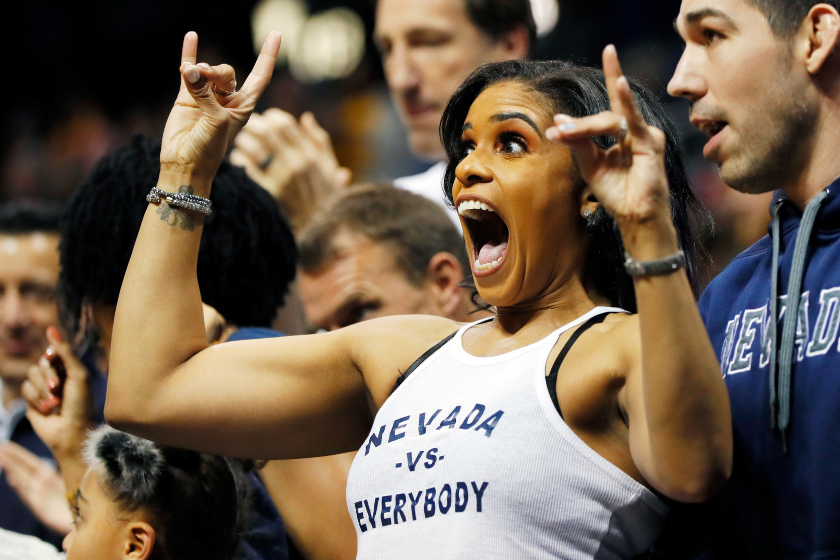 Eric Musselman is married to Danyelle Sargent Musselman, who has worked for ESPN, Fox Sports and NFL Network as a broadcaster.

The two met back in 2008 at a media panel she was hosting in Los Angeles. Danyelle was working as a sportscaster for Fox Sports and Eric was between coaching jobs after the Kings fired him after just one season.

"We ended up meeting afterward, and we talked, and one thing led to another," Danyelle told the Arkansas Democrat Gazette. "Here we are 11 years later married with a little girl."

Not long after, Danyelle changed her last name. The pair tied the knot on September 5, 2009.

Danyelle graduated from Florida State University (yikes, an ACC school?) and began her on-screen career in Georgia. She worked at a local channel in Kansas City, Missouri, in the early 2000s and was a sideline reporter for the Kansas City Chiefs in 2004.

ESPN gave Danyelle the call in 2004. She started out on ESPNEWS while also contributing to some of the network's other programs. In March 2006 while serving as a sports anchor alongside Robert Flores, she dropped a pretty funny F-bomb on live TV while not realizing her microphone was still on. ESPN didn't renew her contract that same year.

Much like the Razorbacks basketball team does, Danyelle rebounded.

She worked for Fox Sports and anchored the FSN Final Score from 2006-2011. She then briefly worked as a host for Yahoo! Sports, covering NFL, college football and high school recruiting, among other sports. She wrapped up her broadcasting career at NFL Network, where she served as an update anchor and host of "Up to the Minute" until 2013, per her LinkedIn profile.

Danyelle also had a recurring role on Onion SportsDome, a Comedy Central parody TV show, where she played Melissa "Wellsy" Wells for the show's short-lived run.

Eric and Danyelle have been married for more than a decade and they've moved all over the country already. The Arkansas coach was born in Ashland, Ohio, and played college basketball at the University of San Diego before beginning his coaching career.

Eric Musselman has three children in total, all of which he loves to show off on social media.

He and Danyelle are raising their young daughter Mariah Musselman in Fayetteville. Danyelle gave up her broadcasting career when Mariah was two and her husband was an assistant coach for the Arizona State men's basketball team in 2012.

"It was a tough decision. When it was just Eric and myself, it wasn't hard, because we both were busy and I traveled a lot and it was fine. But once we had Mariah and she started getting older, it was too much chaos in our home life for me to be traveling all the time," Danyelle told the Arkansas Democrat Gazette.

"When it came down to it, I just knew I had to make a decision about how I wanted to raise my family so I'd be able to spend time with them. I decided to take a step back, and I have not regretted that."

Eric also has two sons from a previous marriage: Michael and Matthew Musselman.

The oldest of Danyelle's stepsons, Michael serves as the director of recruiting for his dad's team at Arkansas. He graduated from San Diego and received his master's degree from the University of Nevada, where he worked in Reno as a graduate assistant and helped the Wolf Pack to a Mountain West Championship under Eric, who won MWC Coach of the Year.

Matthew attends the University of San Diego like his father did as well.

Eric and his first wife, Wendy Bauer, divorced in 2005, according to a Sports Illustrated article. In 2006, he was arrested on a drunken driving charge in his first season as head coach of the Sacramento Kings.

Arkansas basketball coach Eric Musselman is 57, and this NCAA Tournament could turn out even better than last year's.

Either way, his wife Danyelle and three children will be by his side.