When an individual loses a leg or arm at a young age, they normally view quitting sports as an appropriate move. Sure, they'll participate in pickup games for fun, but sadly, they've already thrown the idea of playing organized sports out the window. When people in their corner tell them that they shouldn't give up on their passion because of a devastating setback, they stress the fact that no one will take them seriously at any point in time. So, in order to avoid generating chuckles from cruel spectators on a nightly basis, they elect to travel down a different life path. If 19-year-old Hansel Enmanuel (not Hansel Emmanuel) had refused to give basketball a shot after having his left arm amputated several years ago, the Northwestern State hooper wouldn't have been able to boast about defying all the odds. You probably know him as "the one-armed basketball player," but he's far more than that.

His devotion to finding a way to make positive plays despite being less fortunate than others, resulted in consistent success for him at the high school level. It's been exciting to watch Enmanuel take the floor for the Demons in Natchitoches, and we've loved watching him take the floor for the first time, score his first bucket, and become a social media sensation and a walking ESPN highlight. So, let's dig deeper into Emmanuel's heartwarming story and unbelievable play at Life Christian Academy and Northwestern State.

After all, he's already scored his first points in a college game and has been throwing down thunderous dunks like the one he threw down after a free throw rebound against Louisiana-Monroe.

A Tragic Accident at Age 6

At age six, Hansel Enmanuel Donato Domínguez was involved in a freak accident in the Dominican Republic. For a little while, an unstable pile of cinderblocks prevented him from moving his left arm, but his father swooped in and freed him in less than three hours. Unfortunately, the damage from the childhood accident was too severe for Enmanuel to continue using that arm and before he knew it, he was forced to continue life without a vital body part.

Inspirationally, Enmanuel picked up a basketball and dedicated his time to prove that he could go toe-to-toe with anyone on the court. Videos of his admirable skills began to circulate on the internet in 2020, which led to him being discovered by Life Christian Academy head coach Moisés Michell, who was looking to bolster his roster for the Kissimmee, Florida-based school. Once Michell tossed a scholarship his way, Enmanuel moved to Florida and entered the next chapter of his life as a high school basketball star with something to prove.

Many people believed that his competition would eat him alive in high school, but the three-star recruit held his own when he matched up against high-level opponents. Last August, Enmanuel received his first NCAA Division I offer from Tennessee State to play college basketball, which probably didn't sit well with his savage naysayers. Those individuals had to be sick to their stomachs when Bethune-Cookman, Memphis and Northwestern State came into the picture. On July 23rd, we were informed that Northwestern State edged out Enmanuel's other three suitors, which means that playing Division I basketball will no longer be considered a dream for the one-armed killer. 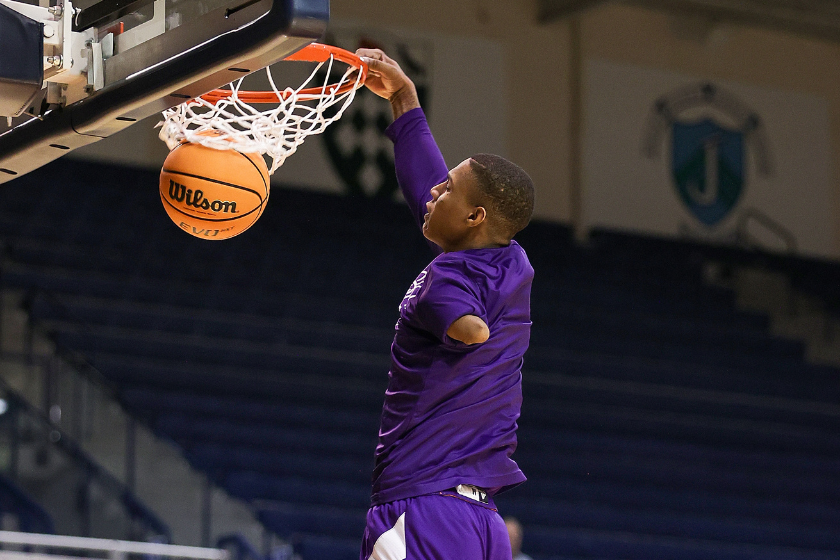 People love to point out that forcing Enmanuel to his left will unquestionably solve all his defenders' problems, so how does he get the job done on that offensive end of the floor? Well, the simple answer is the combo guard takes tremendous care of the basketball. He knows that he doesn't have the luxury of going into each contest with a "too cool for school" approach, which is why he keeps his head on a swivel and pays extra close attention to his surroundings.

If Northwestern State's one armed basketball player wants to quickly execute a spin move to elude a tenacious on-ball defender, he can't relinquish his right hand from the ball and give his other hand a chance to take over. So, alternatively, he maintains control of the ball with his right hand while dribbling through oncoming traffic. Help-side defenders do reach like crazy for steals when he's controlling the rock, but Enmanuel's offensive focus/discipline normally pays off for him in the half-court.

The same thing basically applies when he places the ball behind the back, but even more spectacularly, he regularly manages to shake defenders with his in-and-out dribble move. How exactly? Well, while some sideline watchers believe that it's impossible to get sauced up by a player who can't crossover to his left, Enmanuel has proven that attentiveness is one of the biggest keys to flourishing as a ball-handler. Perhaps you aren't a threat to switch the ball over to your left hand and explode to the basket, but if you get low and forcefully move your body to the left side, you'll be able to play a clever trick on your defender's brain. I'm sure Enmanuel's defenders are aware of his physical limitations, but they can't help but get exposed when he gives them the illusion that he's going to travel in the opposite direction.

It would be downright moronic to pay Enmanuel no mind as a three-point shooter because he's already shown that he can splash deep triples from either side of the floor. Yes, you can tell your coach that you immediately started doubting Enmanuel's shooting skills after glancing at him, but that excuse will only get you buried on your team's bench. His court vision is slightly underrated in my opinion, but soon everyone will realize that he isn't afraid to make challenging passes in the lane.

He's also a high-flyer who would rather slam the ball through the net than finish crafty layups around the rim (but he's fully capable of doing both). When he's not alone in transition, he likes to play it safe and convert powerful tomahawk dunks. When he doesn't have company in the open-court, you'll see him pull off flashier slams and bring entertained fans to their feet. After witnessing Enmanuel put the ball between his legs during a dunk contest last year, I knew that the kid was a special athlete with an enormous chip on his shoulder. Defensively, you can count on him to use his athleticism to hinder his opponents from cashing in on their fast break opportunities. He may not record a chase-down block every game, but I can guarantee you that he'll aggressively contest every shot that's in his vicinity. In case you haven't caught on yet, Enmanuel can make some magical things happen when the one armed basketball player leaves his feet on both ends of the floor.

He Can Hoop With the Best of 'Em

The depressing truth about life is that your haters will follow you wherever you go, which is what Enmanuel must come to terms with if he wants to keep excelling as a basketball player. As soon as he makes a mistake at Northwestern State, he'll have to disregard comments such as "imagine wasting a scholarship on a disabled player," and "he's foolish for thinking he could make it at this level." I'm not saying that it'll be an easy task, but what reason does he have to care about what outsiders have to say? Corey Gipson and his staff are confident that he has enough talent to help the Demons win games in the Southland Conference, so it's only right for him to remind himself that he has the goods.

Right now, though, I don't think that anyone could succeed in bringing Enmanuel down, considering that he's already signed two significant NIL deals during the offseason. In June, he was welcomed into the Gatorade family (the details of the deal are unknown), but he kicked things off by landing an international deal with Banreservas, which is a massive financial institution located in the Dominican Republic. We've seen a few college players partner with companies while the season is still in progress, so I wouldn't rule out the possibility of Enmanuel inking additional NIL deals in the future.

On top of that, Enmanuel had the pleasure of playing alongside an NBA superstar during the summer. Shortly after he announced that he would be continuing his academic and athletic career at Northwestern State, he made a trip to New Jersey and joined forces with Kyrie Irving in the "More Than A Run" pro-am game at Kean University. There aren't many people who can say that they were teammates with the seven-time NBA All-Star and 2012 Rookie of the Year, so it's not an experience that he should attempt to downplay at any time. He also visited California and lit up the Drew League, which is a pro-am league that's notorious for attracting high-profile NBA players. Quite frankly, that should give you a pretty good idea of how dominant this one armed basketball player can be on the hardwood.

If Enmanuel could sit down and have a conversation with his six-year-old self, I'm sure he would thank him for dealing with adversity the right way. In life, you can proclaim that you're doomed when something doesn't go your way, or make the best of your situation and attack each day with a positive mindset. Luckily, Enmanuel went with the second option and that decision is paying major dividends for him today.

MORE: The Curious Case of Emoni Bates: What's Next for the Former HS Phenom After Leaving Memphis