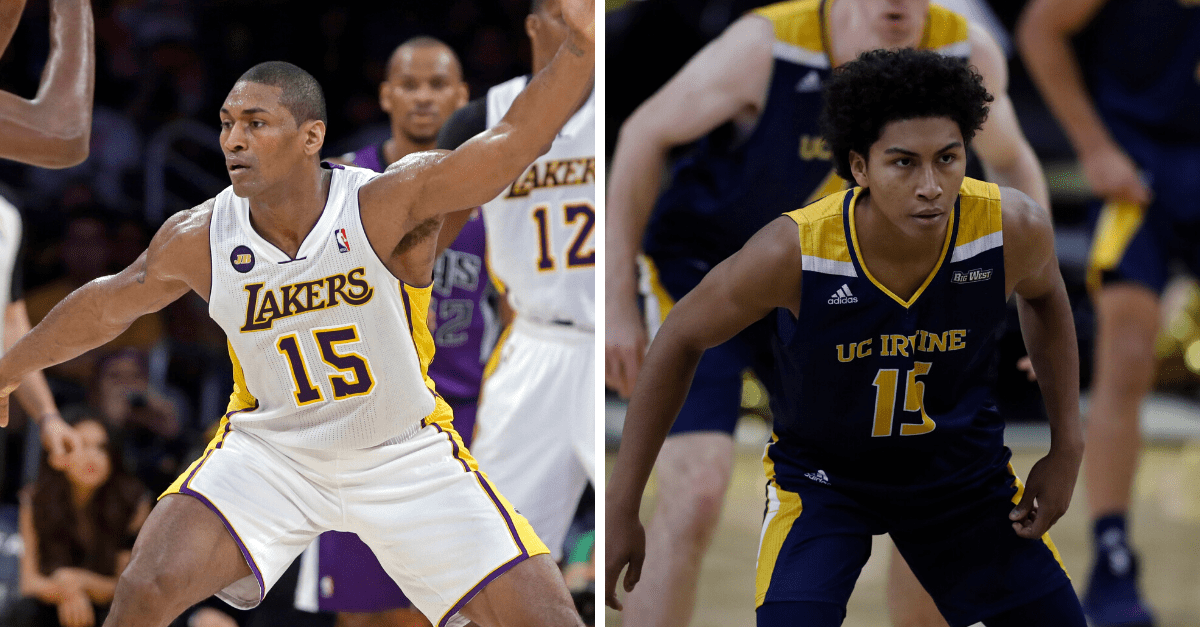 Metta World Peace reached the highest of highs and lowest of lows during his 17-year NBA career. He won a championship with the Los Angeles Lakers in 2010, made the All-Star team in 2004, and won the league’s Defensive Player of the Year award that same year as a member of the Indiana Pacers.

He also asked for a month off from being fatigued promoting an album on his record label, showed up to practice in a robe as a reminder to take it easy, and infamously instigated the Malice at the Palace in Detroit.

World Peace (formerly known as Ron Artest) was anything if not charismatic and entertaining.

His son, Jeron Artest, a freshman on the UC Irvine Anteaters basketball team, took notes from his dad on how to play hard and with intensity.

Jeron shoots the ball with confidence. He navigates to the open spot on the floor, using a great sense of space to seek out clean looks. Upon receiving the catch, he doesn’t waste any time. He knows he’s shooting as soon as he gets the ball and catches and shoots in one motion. With the ball in his hands, he can get his shot off with little room by reading the defense, processing, and acting quickly. He changes gears to keep defenders guessing.

His form is a little unorthodox. As a right-handed shooter, he releases from the left side of his face. Nonetheless, the ball goes in, the rotation is tight, and the follow-through is extended.

Artest particularly takes after his father on the defensive end. He’s a staunch on-ball defender, maintaining a low stance with his arms wide. He uses his body to affect shot and direction without fouling. In his senior year, he shut down projected top-five pick LaMelo Bell in the Grind Session World Championship game in Benton, Kentucky. He scored 21 points, grabbed 4 rebounds, dished 2 assists, and blocked 2 shots in the 96-94 win.

Artest started his high school career at Hillcrest Prep in Phoenix, Arizona before finishing at Bella Vista Prep in Scottsdale. The point guard had college basketball offers from St. John’s — his father’s alma mater — and Wyoming in addition to UC Irvine. He signed with the Anteaters after reclassifying from the Class of 2020.

The son of Metta World Peace played in all of UC Irvine’s 32 games as a freshman in 2019. UCI won the Big West regular-season title and had a good shot at making the NCAA Tournament before it was canceled in wake of the coronavirus pandemic.

Having the DNA of a former NBA player definitely helps. Having the skills, mentality, confidence, and motor helps more.

Jeron Artest has it all.