Kenny George Was a 7-foot-7 Beast, But Where is He Now? 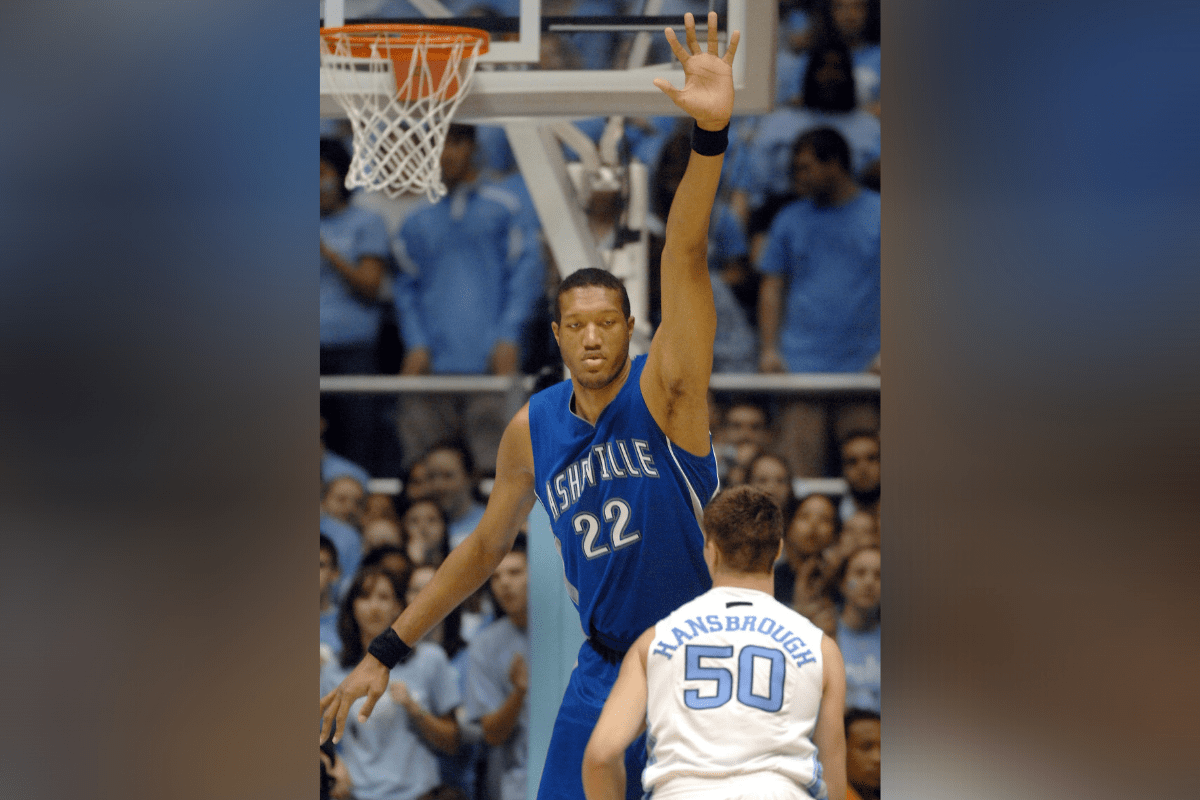 The Biggest Bulldog didn’t build his legend with Gonzaga; the UNC Asheville graduate’s myth is built on what could have been. His legend is linked to his huge physical stature and the limitations of physiology.

It’s the tale of David versus Goliath, except this time, we’re solidly rooting for the Big Guy. Unfortunately for us Philistines, Kenny George’s tale ends much like Goliath’s.

Who is Kenny George?

Kenny George was born in Chicago, Illinois, where he would play high school ball before joining the NCAA. Teenage George was noticed for his mix of size and athleticism, but mostly for his size.

Doctors diagnosed George with an overactive pituitary gland. The disease would result in Kenny George physically growing to the point of near gigantism. “Perfect!” said his high school basketball coach.

Due to the width of his wingspan, George was doomed to both play basketball and be physically ruined by it. Aware of the health risks, George wanted to try his heavy hand at college ball.

Coach Eddie Biedenbach of the UNC Asheville Bulldogs was more than willing to let George take the risk.

Basketball is hard on the human body, particularly on the knees. Going hard in the paint only gets harder with a nearly-400-pound frame. Any kinesiologist could see – The Kenny George Experiment would end in injury.

What they didn’t know was that it would also begin in injury.

Just north of South Carolina at UNC Asheville, the future Big South Player of the Year started sluggish as a Bulldog.

Academic problems complicated with knee issues prevented the Biggest Man from playing from 2004-2006. Once he got going, though, George was essentially a Shot Blockin’ Robot.

More than just a titanic frame, George was a skilled basketball player. During his two-year career, he boasted a respectable field goal percentage. Most shots came from within two feet of the rim and didn’t even require so much of a leap from the towering George, but that’s his game.

In his last year, George showed the promise his coach saw in him. Scouts took notice and George grew hopeful for a ticket to New York and the NBA Draft. The 2007-2008 season concluded with the center becoming the center of attention on networks like ESPN.

Soon, it would be a story in USA Today that told of his unexpected downfall.

What Happened to Kenny George?

George’s play made for memorable moments in his last season before he battled methicillin-resistant staphylococcus aureus (MRSA).

The Internet is full of videos of this man effortlessly standing, stretching, and completing a dunk. There’s only one video of the NCAA’s tallest player getting dunked on.

The idea of this mammoth being jumped over itself is ludicrous; even more ludicrous, it was Tyler Hansbrough who jumped over him.

Playing well for The University of North Carolina, Psycho-T managed to slam dunk over (though it was more like under) the Big Friendly George. That highlight is all anyone remembers from the game. They forget that the Big Bird had been throwing a block party all night long.

No one would have guessed that it would be Hansbrough who would go on to have a better professional basketball career.

After the 2007-2008 season, Kenny George underwent surgery for an infection in his foot. Complications from the surgery lead to a staph infection, near-death experience, and partial amputation of George’s foot.

George escaped the ordeal with his life but lost part of his right foot.

Where is Kenny George Now?

According to those who knew him, Kenny George was always interested in a life outside sports.

The Super Big Man did more than just pave the way for future bigs like Manute Bol’s son. He spent his free time reading comic books, enjoying movies, and generally appreciating the nerd culture we so love today. George earned a degree in mass communications.

Perhaps George would have joined the Harlem Globetrotters had he remained uninjured. The team would be a perfect fit for his love of entertainment and basketball. George never made it to Harlem, though fans claim he trots the globe.

But where is he now? That’s hard to say. The tall guy has kept a low profile since college and is harder to spot than a Sasquatch. Just like Big Foot, fans have reported sightings of Kenny George in both Siberia and Australia.

Internet rumors insist George spent time in Russia in 2011, though not as part of the Kenny George Band (KGB). One Australian Basketball forum suggests that after a solid Russian Super League season, Kenny George was ducking down under. The reports are unconfirmed at best and scurrilous at worst.

If you see him in the wild, be sure to take a grainy photograph. Fans everywhere would go wild just to see the Big Man blocking shots and on both feet once again.