It is an almost unfair, impossible task, to compile an All-Time Starting Five for Michigan State. This list could be compiled in a number of ways. But we're doing an "All-Time Michigan State Spartans' Starting 5" and not a "five best players in Michigan State men's basketball history." Which means one player per position. It's very tempting to do this in the same manner as "All-NBA" selections, which would mean two guards, two forwards, and a center. And since four of the best players the Spartans have ever had are all Point Guards, this would make things easier.

But for the sake of a challenge, let's compile the best traditional team from across the Michigan State generations and one that would help Tom Izzo win his second College Basketball National Championship if he were lucky enough to lead this team on the court. 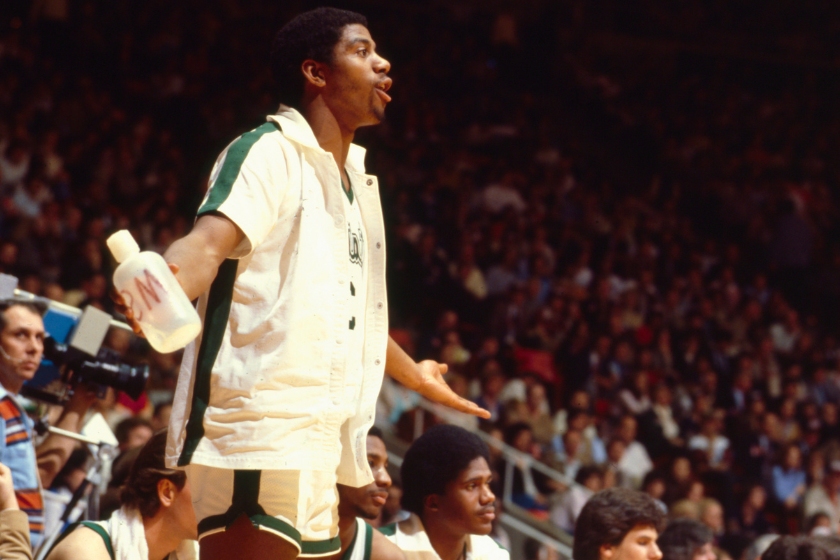 Related: Magic Johnson's Net Worth: How Rich is the NBA Icon Today?

The deepest position in the school's history is also no contest. I don't care what era of basketball is your favorite, or how old you are, there is no arguing with the dominance that is Magic Johnson. He's on many people's "Basketball Mt. Rushmore" including my own, so how could he not be leading this team? There's a story about Magic committing to his hometown school simply because head coach Jud Heathcote promised him he could play point guard, something schools like Indiana and UCLA wouldn't promise.

Magic put up impressive numbers in his freshman campaign, averaging 17 points, 7.9 boards and 7.4 assists in a debut season that would see MSU bow out in the Elite Eight to eventual champion Kentucky. The next season, Magic's last before going pro, saw Johnson leading the Spartans all the way to the title game against Larry Bird and an undefeated Indiana State team, giving us the birth of the Magic vs Bird rivalry in the NBA. (If you've never had the pleasure, check out this article and marvel at the skill displayed.) An Outstanding Player of the Final Four performance brought East Lansing its first championship banner. 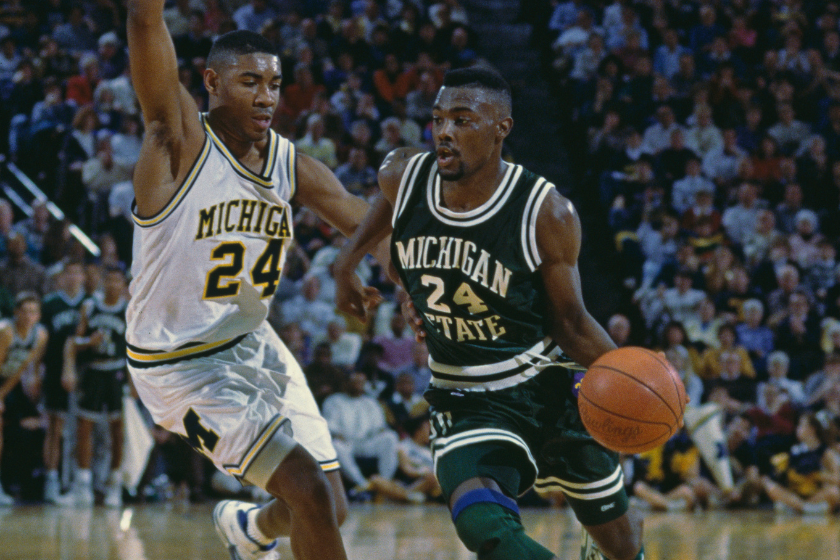 Fun Fact: No one has scored more points in the Big Ten since Shawn Respert left school. He's No. 2 on the all-time Big Ten list with 2531 points from 1991-95. Only Indiana's Calbert Cheaney from 1990-93 has more. Calbert achieved that point total in large part by shooting .454 from beyond the arc. Can you imagine what his point total would have been, or how good an NBA player he would've been if he played in today's volume 3 era? Scary.

Respert also holds the school records for best free throw percentage (.857), field goals (866) and field goal attempts (1791). He may not have had much NCAA Tournament success, but as a pure scorer, there is no one better. 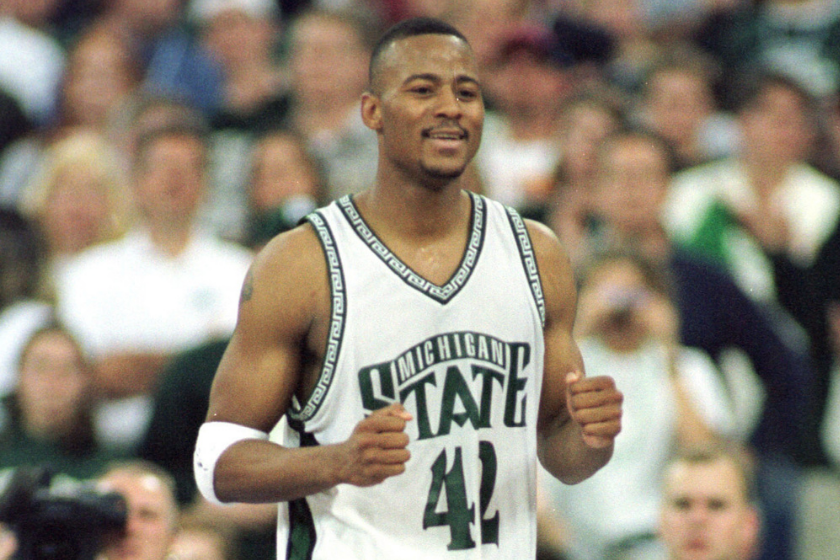 Look, there has to be a member of the FlintStones on this team. There HAS to be. And since the easy pick from that group sadly played point guard...MoPete is the next logical choice. In 2000, the other year MSU was crowned national champion, it was Peterson and not Mateen Cleaves who was the Big Ten Player of the Year. He led the team in scoring that year as well. If not for Middle Tennessee State, this spot would likely be held by Denzel Valentine, but alas, it was not meant to be. 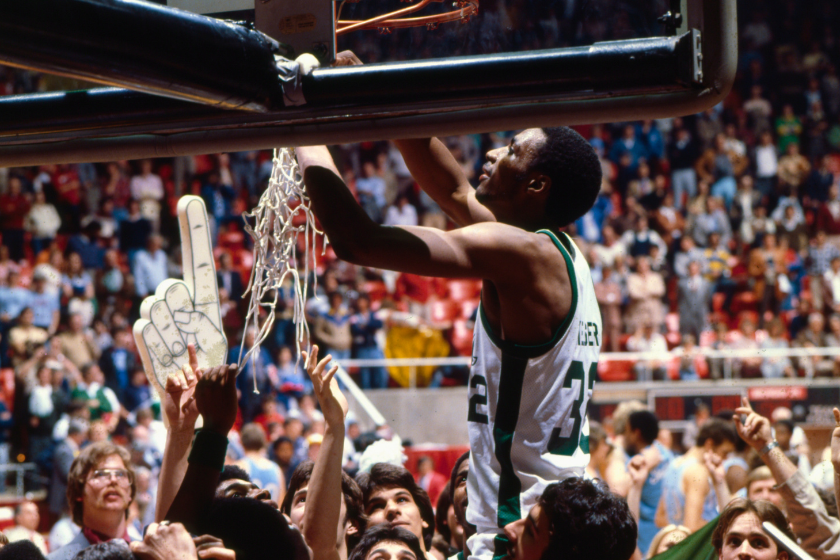 Kelser is fourth all-time in points at MSU, second all-time in rebounds and sixth all-time in field goal percentage. When he left school, he was the leader in all those categories. Kelser was just as important to the 1979 Spartans as the guy playing PG was. He never saw the professional success or changed the game in the ways his Magical teammate did, but Kelser was an unrivaled beast during his time in East Lansing.

Every team needs a guy who just keeps his head down and goes to work, and that is Kelser. 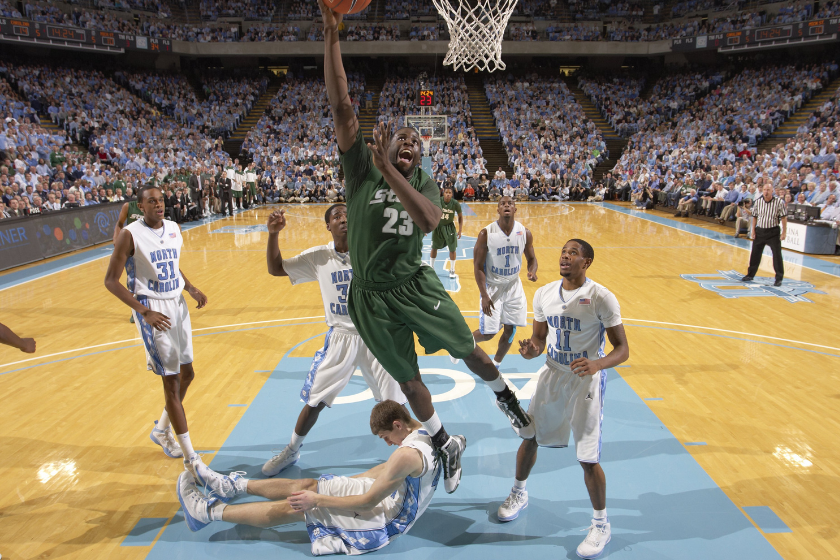 The opposite end of that spectrum is a vocal, emotional leader. There is no one who better fits that bill than Draymond Green. Now, one could argue Draymond is really more of a power forward and not a true center, but he can and does play the five and there was absolutely no way he could be left off this list.

All-American honors, Big Ten Player of the Year, Big Ten Sixth Man of the Year, All-Big Ten, Big-Ten All-Defense, Big Ten Tournament MVP, NCAA All-Region team (twice) and Big Ten Tournament Team (twice) is quite the resumé. Green also leads MSU all-time in rebounds and games played. Second in steals. Eighth in blocks, although he was second when he left East Lansing. One of only three Spartans with 1,000 points and 1,000 boards (Kelser is also part of that trio).

But most importantly, Draymond Green is the first player to pop to mind when something like Spartan Mentality or Spartan Dawg is said. No one represents the school more, or better, than the defensive monster from Saginaw, Michigan. 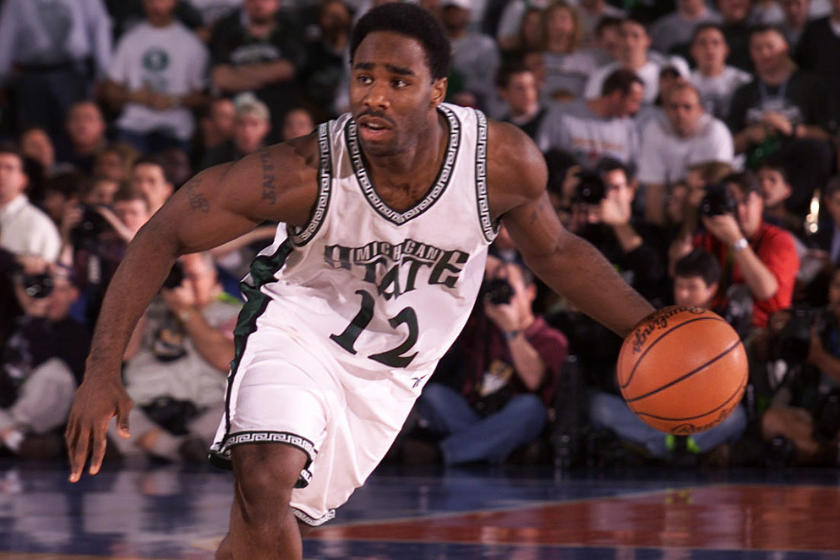 The heart of the Flintstones really should't be left off this list of Michigan State basketball greatness. So here he is. All-time Spartan steal leader. Second in assists only to Cassius Winston (who also would've made this list if it was position-less). If Draymond is the poster child for "Spartan Mentality," Mateen Cleaves was the blueprint that Green built off of, and for good reason. Mateen was the only Spartan to be named All-American three times and was named Big Ten Player of the Year twice.

On the championship side of his resumé, Cleaves led the Spartans to the Final Four in 1999 where they lost to Duke, but the real feather in his cap is the 2000 NCAA Championship, where he led the Spartans to their most recent national title and was named Most Outstanding Player of the March Madness Tournament. No one was a better postseason performer than Cleeves, especially in the Tom Izzo era.